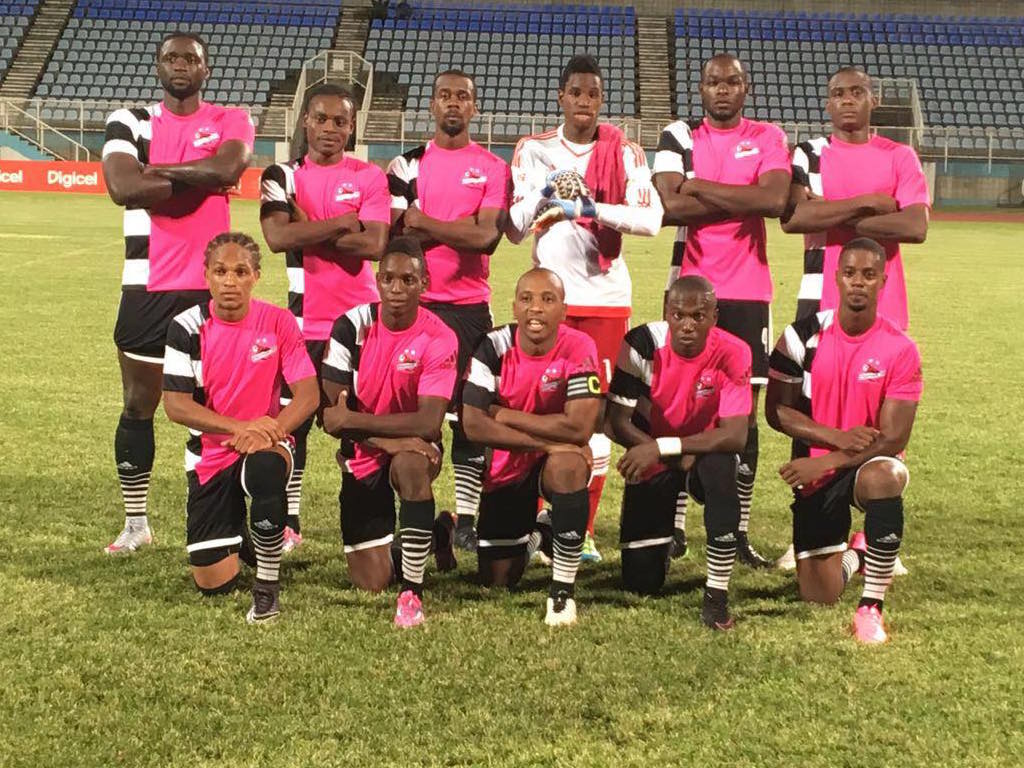 Jan-Michael Williams’ return between the sticks for the first time after six months due to injury saw the Trinidad and Tobago international make three saves in a penalty shootout as his side, Central FC, held off an exciting Defence Force challenge to retain the Digicel Charity Shield on Friday night at the Ato Boldon Stadium in Couva.

Although former England Premier League forward Kenwyne Jones was the focus during the ninety minutes of the Trinidad and Tobago Pro League season-opener, it was his Soca Warriors’ teammate, goalkeeper Williams, who stole the show to hand Central the 2016 Digicel Charity Shield with a 3-1 penalty win following a keenly contested 2-2 draw against the Army/Coast Guard combination.

Defence Force’s veteran talisman Devorn Jorsling netted the first kick from the spot but Williams, who entered the game after replacing goalkeeper Javon Sample at the start of the second half, pulled off consecutive saves in the penalty shootout to deny Hashim Arcia, Jerwyn Balthazar and Marvin Jones. While Leston Paul, Sean De Silva and Nicholas Dillon were clinical against Defence Force goalkeeper Andre Marchan who had made one save, denying Marcus Joseph on the third penalty kick.

It was an unfortunate end for the Defence Force players who had done well to pull level after conceding two early goals against the two-time reigning Caribbean and Digicel Pro League champions, Central, who, prior to kick-off, already had two CONCACAF Champions League games against Major League Soccer (MLS) outfits Vancouver Whitecaps and Sporting Kansas City under their belt this season. Meanwhile Defence Force, on their third attempt at the Charity Shield, were fresh out of pre-season.

Defence Force were stunned within the first five minutes as Central celebrated a 2-0 cushion with former Sunderland, Stoke City and Cardiff City forward, Jones, involved in both items.

Darren Mitchell handed the Couva Sharks a 1-0 lead just three minutes in when he hit into a vacant net after goalkeeper Marchan was put into action by an attempt from Jones.

Jones, who netted on his Central debut in August in a 2-2 draw with Kansas City, then got his name on the scoresheet in the 5th minute by hitting in from close up thanks to a move into the left of the box by Marcus Joseph who fed a pass to the Soca Warriors’ captain to score.

“I have a crazy knack for scoring on debut for every team I’ve played for so I’m just continuing the trend,” said Jones after the game. “I’m happy we won the curtain-raiser for the [Pro League] season. Good performance by Jan-Michael and the entire team.”

Jones, a former W Connection player, had an excellent opportunity to complete his first game back in the Pro League since 2004 with a double while putting the game out of Defence Force’s reach, but headed overbar from the edge of the six-yard after meeting substitute Sean De Silva’s well-placed cross four minutes from the end.

Jorsling, the Pro League’s all-time top scorer, had sliced Central’s lead 2-1 on 18 minutes with a glancing header to find the back of Sample’s net from inside the six-yard area following a move on the right by Levi Serries.

Ten minutes later Arica had a great chance to put Army level but saw his attempt tipped wide by Sample after being put through by Jorsling. The attacking midfielder had another attempt five minutes before the break but, again, failed to find the equaliser.

The lanky built Arcia had another go at goal in the 57th-minute from a perfectly planned Jorsling free-kick from the right, but Central’s substitute goalkeeper Williams produced an equally brilliant save to put the attempt overbar.

But Williams, who says he is now one hundred percent fit after suffering a shoulder injury in March during play against Jamaica's Montego Bay United in the Caribbean Club Championship which Central went on to successfully defend, was unable to stop the Defence Force equaliser in the 89th-minute.

Defence Force second half substitute Sean Narcis’ levelled the score 2-2 when his blast off a Marvin Jones’ right side cross took a wicked deflection to wrong-side Williams.

However Williams was determined not to see his side relinquish the Charity Shield, denying Arcia a stoppage-time winner and sending the game into a penalty shootout after the Defence Force player was released into the area by a cheeky heeled pass by Jerwyn Balthazar.

“Every game I play I want to play to the best of my ability and to the best for my team—business as usual for me,” said a delighted goalkeeper Williams.

“It was a good game,” Williams added. “Defence Force obviously started a bit slower than us, us having been playing in the CONCACAF Champions League and them (Defence Force) now out of pre-season. But they really gave it a good go in the second half and were fortunate to get their second goal.

“Credit to them they played well. But we (Central FC) are a team… twice Caribbean champions… twice League champions. We have the character, the determination and the energy to finish in the end.”

“Credit to our boys,” Saunders said. “I think they did very well tonight. Going forward I think we will have a psychological advantage over Army with this title. The Pro League this season is two rounds and it’s about who can get out the box early and stay on top.”

Saunders added that the Defence Force contest was also good preparation for his team ahead of their away fixture at Canada’s Vancouver Whitecaps on September 28 in CONCACAF Champions League action before completing their Group C fixtures at United States outfit Sporting Kansas City on October 19.

Meanwhile a disappointed Defence Force head coach Marvin Gordon wants to knock Central off their perch by winning the Digicel Pro League as well as aiming for the available domestic knockout titles.

“It wasn’t a bad showing tonight because coming from two goals down against a team with this type of quality shows how good the Defence Force are as a unit,” said Gordon. “We started slow but got into our own and started playing the football we could play and created chances. We matched them (Central) stride for stride and even created more chances than they did.

“The guys would be a little hurt because they thought they did enough in terms of creating chances to win. Central, tonight, after scoring the opening goals didn’t create much after.

“But it was a brilliant game. A team in Concacaf Champions League and a team playing their first game of the season and putting on a fantastic game till the end.

“This season we are going after the league. It’s a short season with three trophies up for grabs and we are going for it all,” ended the Defence Force coach.