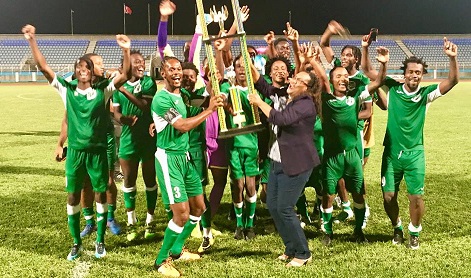 Suriname international Dimitri Apai, Kadeem Corbin, Dominica’s Briel Thomas and debutant Adan Noel also celebrated goals on the opening night to show Connection will be a force in the long-awaited 2018 season which will continue next weekend with the First Citizens Cup.

Jaden Prowell converted from the spot on his Pro League debut to give North East Stars a consolation item midway through the second half. But by then the newly assembled side under new coach, Yugoslav-born Zoran Vranes, were already trailing by more than a handful of goals.

Vranes had also lost 1-0 to Connection in the Charity Shield four years ago on his Central FC debut but back then quickly turned around a star-studded Couva Sharks side into the eventual league champions. Last night’s result however wasn’t a narrow 1-0 loss.

Joseph, 27, who joined Connection last season, fired the Stuart Charles-Fevrier coached side in front on eight minutes, beating goalkeeper Glenroy Samuel after controlling a through pass inside the box.

It was the start of what turned out a very miserable night for Samuel who was forced into action three times in the first three minutes including pulling off a save to put overbar a strike from former Trinidad and Tobago youth utility player and Connection first team debutant Kierron Mason.

Samuel conceded again on half hour when Joseph celebrated his second to cushion Connection 2-0 after connecting to a left side cross from marauding full-back Kurt Frederick. The St. Lucia international had made a well-timed run to meet a Mason pass before providing the assist but ended the night blanked by Samuel on either side of the break.

Apai, though, made it 3-0 to the 2012, 2013 and 2014 Charity Shield winners by intercepting a Jabari Brathwaite back pass and rolling the ball into the exposed North East net.

An even worse back pass from almost half line gifted Joseph a chance three minutes into the second half and the left-footed striker punished a hapless North East goalie to complete his second hat-trick since a 12-0 mauling of Tamana United in the first round of last season’s FA Trophy last September.

Connection, back then, went on to win the FA Trophy, adding to their First Citizens Cup success and runners-up finish behind North East in the league.

Last night, North East were an almost completely new side from last season’s league winning team and failed to match Connection’s superiority and offensive prowess although forward Prowell did well to send goalkeeper Jason Belfon the wrong way from the spot after he was brought down in the area by substitute Maurice Ford.

Kadeem Corbin controlled a Daniel Diaz cross to lash home Connection’s fourth goal past Samuel in the 51st minute, forcing Vranes into a change with Javon Sample entering the game between the sticks.

However that, along with a number of fresh legs in outfield, didn’t avoid the ball from entering the back of the net.

Briel Thomas executed a neat half-volley off the outside of his boot to make it 6-1 and another player off the bench Noel, following a burst of speed, lashed home Connection’s final item for the 7-1 finish.