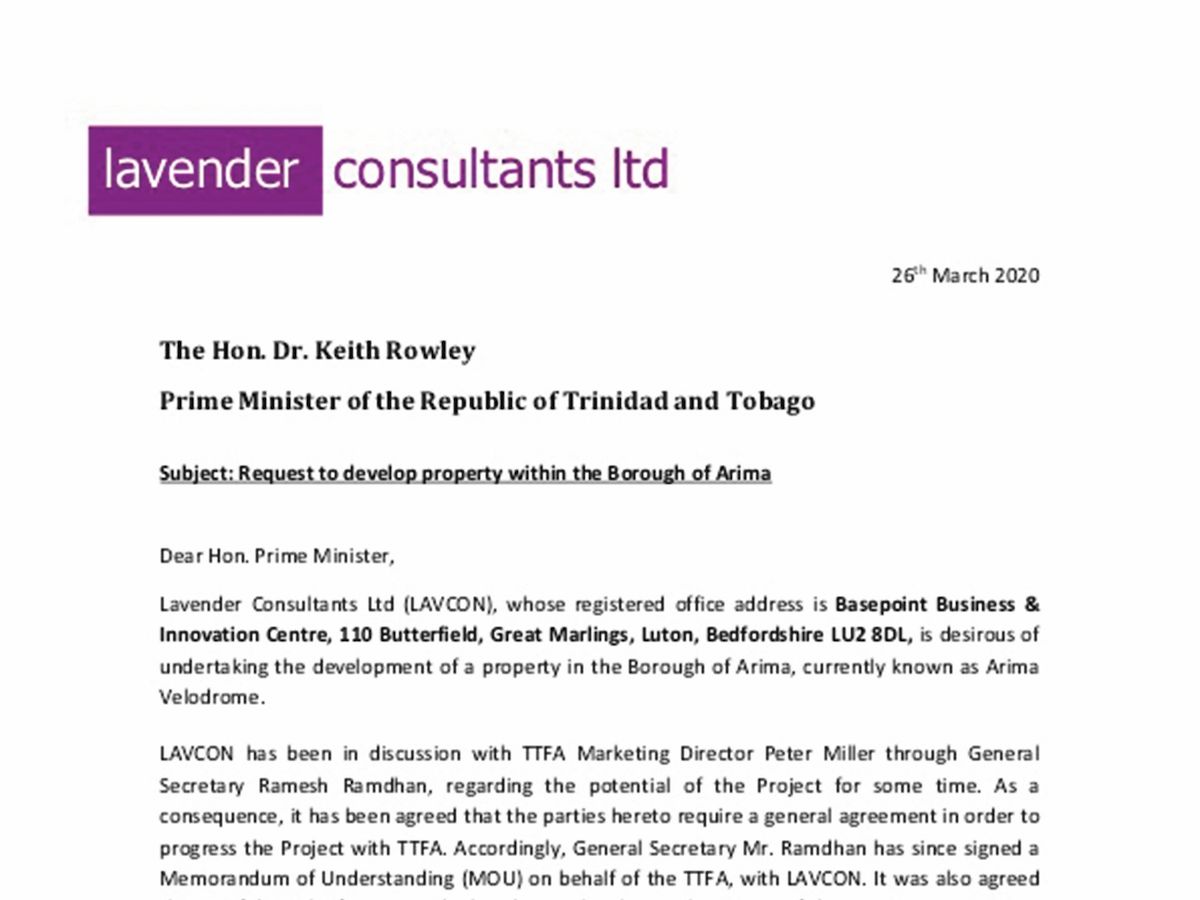 Despite several concerns raised by members of the former board of directors, a disclaimer issued by the Arima Mayor and a non-acceptance by FIFA, agents of former T&T Football Association (TTFA) president William Wallace appears to be still pursuing the acquisition of the Arima Multi-purpose Sports Facility.

The request for the utilisation of the facility was by John Mitchell, CEO of Lavender Consultants Ltd (LAVCON), on behalf of the TTFA in a letter to Prime Minister Dr Keith Rowley on March 26.

The plan to utilise the facility, in a partnership with the Arima Borough Corporation and UK Consultants Ltd, was exclusively reported in the T&T Guardian on March 21 and 23. At the time, it was touted as part of the TTFA's plan to help erase its inherited TT$50 million debt.

However, less than 24 hours after Guardian published the March 21 story, Arima Mayor Lisa Morris-Julian distanced the corporation from any partnership with the TTFA and UK Consultants or agreeing to any Memorandum of Understanding (MOU) for a multi-billion dollar state-of-the-art football, residential and sporting facility in Arima.

But even as FIFA has set up a Normalisation Committee to reorganise the TTFA's operations, LAVCON, in the letter to the PM on March 26, which Guardian Media Sports has seen, made a request to develop property within the borough and outlined the following:

"LAVCON has been in discussion with TTFA marketing director Peter Miller through general secretary Ramesh Ramdhan, regarding the potential of the project for some time. As a consequence, it has been agreed that the parties hereto require a general agreement in order to progress the project with TTFA. Accordingly, general secretary Mr Ramdhan has since signed a Memorandum of Understanding (MOU) on behalf of the TTFA, with LAVCON. It was also agreed that confidential information disclosed to each other in the course of the ongoing negotiations remains confidential and is not to be used by the parties for any purpose other than the permitted purpose.

Notwithstanding recent developments between FIFA and the TTFA and the inadvertent release of confidential information into the public domain, LAVCON hereto remains committed to continuing the discussions with all stakeholders with a view to making this project a reality in the beneficial interest of the citizens of Arima and the people of T&T in general.

LAVCON is proposing to undertake its pre-work on the project’s overall development capability, including the funding options that should enable it to cover the cost of each of the specific development categories. In regards to the overall development, it is understood by LAVCON that the TTFA shall look to introduce LAVCON to any prospective party that could assist the Project and whereby LAVCON will explore all the development options in readiness of formally looking to enter into an overall development contract. This would include, but not be limited to the following:

(ii) Commercially, and to be included as part of the new stand, would be 2 end blocks that would be developed to include shops, offices, hotel, casino, restaurants etc;

(iii) An independent and modern medical consultant and treatment facility that would be used by paying customers that live on the island;

(iv) A housing development opportunity on the land surrounding most of the new stadium. It is understood this would be a mixed development ranging from 1/2 Bedroom Apartments through to 3/4 Bedroom Houses and requires specific attention to qualify the mixed housing requirement;

(v) As part of the overall development, LAVCON has agreed to include a fee to TTFA of TT$50 million. The fee would be paid in four equal amounts of TT$12,500M over the development period as follows:

- Fee payments would be made by the Special Purpose Vehicle company (SPV) that is set up by LAVCON to the specific account of TTFA, the details of which is to be provided to LAVCON by TTFA.

In Guardian Media's March 23 article on the issue, headlined — Arima Mayor dispels TTFA $50M debt plan — several former TTFA board members said they were not aware of such a plan or project by the TTFA.

Acting T&T Pro League chairman Brent Sancho said then he heard of a plan to address the debt but it was not discussed or approved by the board. Richard Quan Chan, a very experienced board member, also said he was not aware of the project. Two other board members who did not want to be named were also approached and one of them said they had no knowledge of the plan while the other refused to comment.

However, after seeing the letter to the PM, Guardian Media reached out to Sancho and asked him if Peter Miller had been appointed by the board of directors to TTFA marketing director position. His response was, "No, that name never came to the board and it was never discussed."

Asked who is the TTFA's current marketing director he said, "As far as I am aware, no one."

Guardian Media Sports has also seen two letters dated earlier this month in which Sancho wrote to Wallace seeking information on contracts for coaches, businesses contracts and a qualified opinion position on the Home of Football in Couva.

Sancho also noted to Wallace the issue of item 14 of Justice Ronnie Boodoosingh's judgement on June 6, 2019, in relation to a legal challenge by former director Keith Look Loy against the David John-Williams-led administration seeking information which he felt was hidden from him.

Boodoosingh's judgement stated: "The next matter that is for determination is whether the Claimant would be entitled to the documents in question. The answer to this, in my view, is an unequivocal yes. First, he is the director; he has to be provided with the information concerning the running of the organisation. This is patent and really needs no authority in support. Given the functions of a director under the law and under the incorporating statute a director must be entitled to be provided with all of the information concerning the affairs of the association. He has obligations as well as potential liabilities and must, therefore, know the true position so that he can properly perform his functions. Without information of the kind he seeks, he cannot properly perform his duties. In particular, I would refer to the request at this stage that he has made."

Sancho revealed that up to March 17 when FIFA had sent notice to the TTFA announcing it was sending a Normalisation Committee to govern T&T football, he had not got the information requested from Wallace.

A source close to the TTFA revealed that the Lavender/TTFA MOU for a multi-billion dollar sporting facility in the Arima community, which was communicated via letter to Veron Mosengo-Omba, Chief Member Association Officer of FIFA, on January 23 as a plan to erase the $50M TTFA debt, along with the High court garnishee order on February 13 by a former employee Kendall Walkes, were the main reasons FIFA/CONCACAF sent a three-member finance audit committee to examine the TTFA accounts and contracts in February.

Miller, who is said to be a close associate of Super League president and TTFA board member Keith Look Loy and T&T senior team men's team head coach Terry Fenwick and Ramdhan, was CEO of the defunct Football Company of T&T for the 2010 World Cup and had stints with W Connection and CL Financial San Juan Jabloteh. He hit the headlines in the UK following his resignation as a board director from Port Vale, after his promise that he could bring new investors to the club apparently failed. Former national players Anthony Rougier and Chris Birchall are former players of Port Vale.

Miller is understood to be an associate of Lavendar Consulting principal John Mitchell, who himself was found guilty in 2007 of various charges by the English FA of rule breaches concerning agents while he was a board director of Luton Town.

Meanwhile, on Friday, FIFA appointed businessman Robert Hadad as chairman of the TTFA Normalisation Committee, with lawyer Judy Daniel as deputy chairman and retired banker Nigel Romano as members with immediate effect and said two other members will be named in the coming days.