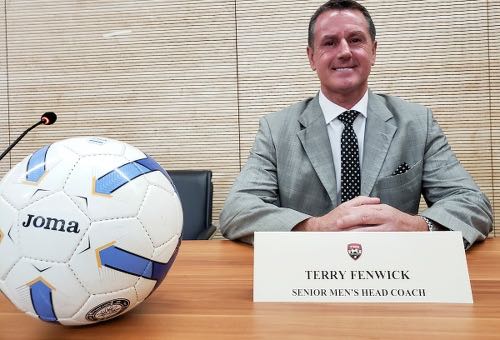 Trinidad and Tobago Men’s National Senior Team coach Terry Fenwick has become the first technical staff member to share his thoughts on the power struggle at the helm of the local football association.

And the former England World Cup defender believes that the Trinidad and Tobago Football Association’s technical programmes are in a ‘lose lose’ situation as president William Wallace battles Fifa for control of the local body.

On 17 March, the Bureau of the Fifa Council, which is led by Fifa president Gianni Infantino, decided to implement a normalisation committee in the twin island republic and simultaneously strip Wallace of his authority—just four months after he was elected TTFA president.

At present, Wallace is challenging the Fifa decision at the Court of Arbitration for Sport in Lausanne, Switzerland.

Fenwick was the first appointment of the Wallace-led administration, as he replaced Dennis Lawrence at the helm last December. And the former Portsmouth, San Juan Jabloteh and Central FC coach said Fifa has not given the current administration enough of a chance to show what it can do.

However, the Englishman suggested that he struggles to see a bright side in Wallace’s fight.

“I hear William Wallace [and] I am disappointed for him, because of how quick it was [that Fifa moved to get rid of him],” Fenwick told Wired868, “but I am looking at the ability of Trinidad and Tobago’s board of directors to raise funding for anything—I just can’t see it. Where does it go from here?

“If Fifa withdraws the funding, we crash anyway; and my first thought is not the politicians but the young kids who are striving to become national footballers.

“My concern is without Fifa funding there could be so many kids thrown under the bus. I can’t agree with that.”

Fenwick stopped short of saying, directly, whether he felt Wallace should withdraw his case.

“It is his decision to stop or continue the case,” said Fenwick. “Have they got the money to go to CAS? I don’t know. It will run its course.

“My side of the story is technical, to make the national team better again.”

Fenwick’s viewpoint, which he hinted at earlier to the Trinidad Newsday, brought a furious response from technical director chairman Keith Look Loy, who said the coach had no business talking about anything beyond his team.

“He is an employee of the TTFA and should not be commenting on executive matters as a general rule of ethics,” said Look Loy. “He is forbidden by the coach’s code of conduct and the media policy—both of which were aired, discussed and agreed at the two technical committee meetings that I chaired with national and regional coaches—from making public comments on general TTFA matters.

“He was present at both meetings.”

Fenwick is among roughly three dozen technical staff members who have not been paid since Wallace was elected president, due to Fifa’s decision to withhold funds from the TTFA.

At present, Fifa owes the TTFA US$2.5 million (TT$17 million), which represents their total annual entitlement under the Fifa Forward Programme. But Infantino and secretary general Fatma Samoura are stalling on making the payment, so as to ensure that it goes to normalisation committee chairman Robert Hadad and not Wallace.

Fenwick is yet to hold his first training session as Pro League clubs were playing as many as three games per week between January and March while Covid-19 restrictions have made full-time workouts illegal since then.

“First and foremost, I’ve been chasing players down from around the world and keeping that communication up,” said Fenwick. “Even today I was on the phone with [Sheldon] Bateau, [Khaleem] Hyland, [Kevin] Molino, Nick De Leon, Levi Garcia and Ryan Inniss. I’m trying to keep regular relations with my players before they even hit the ground in Trinidad—some of whom were born abroad and were treated badly when they were last involved with the team.

“[…] Yesterday, I had the [local-based] guys doing their fitness session, which has been consistent for the last two to three weeks. They had their phones or laptops facing where they were doing the actions. Some of them have had chickens and everything going on in their back yards; and we have had a joke about it!”

Fenwick is waiting on clearance from the Ministry of Health to start full training sessions.

However, Look Loy made it clear that he did not appreciate Fenwick’s sentiments and will not forget them anytime soon.

“The court case is still to be settled [and] Wallace might win,” said the TTFA technical director. “How he became [senior men’s national team] coach [was because] I, Wallace and the elected officers fought for him to be appointed. We believed he was the best candidate—all factors, including finance considered.

“[Pro League chairman Brent] Sancho and others he is hobnobbing with now were against his appointment.

“Time longer than twine. He living here long enough to know that saying.”

Fenwick declined comment on Look Loy’s statements. However, Wired868 understands that the Englishman is currently pursuing legal action against Sancho due to a breach of contract while he was head coach at Central FC.

Up to the time of publication, Wallace could not be reached for comment.