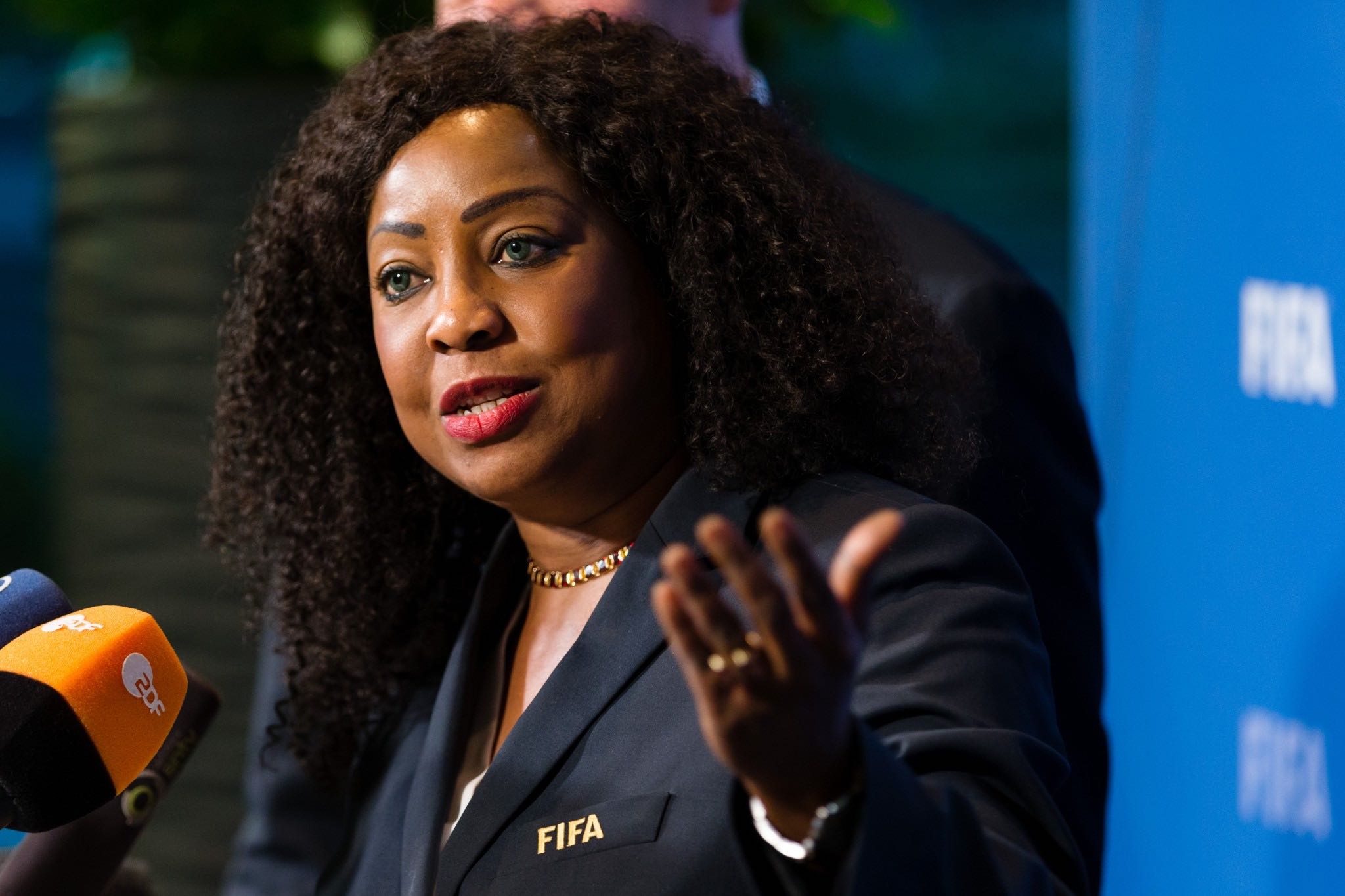 September 16, could mark a period that will go down in T&T's football history, and one that is likely to surpass any other achievement on the football field.

The country faces a decision by football's world governing body- FIFA, on whether the T&T Football Association (TTFA) will be suspended, as was stated in a letter on August 26 to Robert Hadad, the chairman of the Normalisation Committee, by FIFA General Secretary Fatma Samoura, if the legal challenge against FIFA in the T&T court was not withdrawn by today.

Angus Eve, the outspoken national Under-17 head coach said, "We must have been banned already.

"Considering the deadline given by the FIFA and how Wallace and the TTFA members have been moving, I don't think we will be spared, as Wallace and company will not be backing down. In fact, they have even won again in the court after Justice Carol Gobin granted an injunction to stop T&T's football membership from holding an Extraordinary General Meeting (EGM) to stop the TTFA from fighting the FIFA in court over the implementation of a Normalisation Committee," Eve said.

However, Eve, using two of the world's popular freedom fighters Martin Luther King and Malcolm X to reference his point, said both men did not sacrifice the masses in their fights but rather themselves, noting that Wallace and his team should do the same and not sacrifice the people of T&T over a point they may want to prove.

According to Eve, the entire country and maybe the world, would agree that the manner in which the TTFA executive was ousted just three months after being fairly elected into office, was not right but then they should not suffer for that fight, saying that the country cannot look forward to FIFA World Cup Qualifiers, CONCACAF Gold Cup, play in the CONCACAF Nations League, referees will lose the opportunity to ply their trade abroad.

The TTFA was removed from office on March 17, after a FIFA/CONCACAF team determined that the TTFA's management flaws had put the sport on the verge of insolvency and illiquidity. But Wallace and company first took their fight to the Court of Arbitration for Sports (CAS) in Switzerland in May before moving to the High Court in T&T, later that month citing institutional bias at the CAS after being asked to pay the the 40,000 Swiss francs (TT$276,000) in associated costs.

Since then, Justice Gobin ruled on August 13 that the matter can be heard in the T&T High Court and seven days later FIFA gave notice to appeal. Then on September 11, Wallace and his team filed an injunction asking the T&T court in its application to stop the Normalisation Committee from:

1. Taking any further steps to convene and/or conduct any meeting, on the September 15, 2020 or any other date, which purports to be an Extraordinary General Meeting of the Claimant;

2. Instructing and/or directing any person or persons to seek to withdraw the instant claim and/or in any way, manner of fashion from interfering with or seeking to undermine, the instant proceedings, except by way of lawful representations made by the Defendant’s duly appointed Attorneys-at-Law or other lawful intervention;

3. Making use of and/or publication of the Claimant’s official logo, letterhead, and stamp/seal; and 2. That the Defendant do pay the costs of this application.

The application has listed 20 grounds for the TTFA requests, while Williams has produced an affidavit with 20 documents which comprised among others, the membership signed petition letter dated August 28, the response from Hadad dated September 4, agreeing to convene the EGM on September 15 and the August 26 letter from FIFA general secretary Samoura, addressed to Hadad, warning that TTFA would face sanctions if it did not withdraw the matter out of the T&T High Court by today.

Judge Gobin granted Wallace and his team's request on Monday.

Eve, a former national captain, described the situation as unfortunate, noting that if the TTFA does not want to follow the FIFA rules now, then they never will.

"This could mean the TTFA could be thinking about starting its own footballing body with its own rules and potential members," said Eve.

Meanwhile, FIFA will hold its Congress on Friday and will have on its agenda, suspension and expulsion of Member Association. Eve said he did not want to predict what action, if any action, will be taken against T&T.

FIFA's decision to implement a Normalisation Committee to manage the TTFA after it enforced Article 8.2 of the FIFA Statutes which states: "Executive bodies of member associations may under exceptional circumstances be removed from office by the Council in consultation with the relevant confederation and replaced by a normalisation committee for a specific period."

"If FIFA pays the debt of the TTFA, the United TTFA will drop its case in the High Court." Those were the words of United TTFA President William Wallace with one day to go before the FIFA deadline date of September 16th.

AS THE threat looms of either a ban or a suspension from FIFA, the United TTFA team, led by ousted TTFA president William Wallace, is not backing down from FIFA’s suggestion that they withdraw their case, against the global governing body for football by today, September 16.

On Monday, Justice Carol Gobin, in the Port of Spain High Court, granted an injunction to the United TTFA to stop Tuesday’s proposed Extraordinary General Meeting (EGM), which was called by the normalisation committee to deal with United TTFA’s legal battle against FIFA.

FIFA, on August 26, gave the United TTFA a deadline of September 16 to withdraw their case from the High Court and have it heard at the Court of Arbitration for Sport (CAS), or face disciplinary action (either a ban or suspension) at the FIFA Congress, which will take place virtually on Friday.

Wallace said on Tuesday, “Our position at this time, at 4.42 (pm) on the 15th remains the same. We are going forward with our matter.”

He continued, “After that expose (on the local media about the Home of Football project) which actually was the evidence that we lacked, our primary action was based on knowing that this whole thing (installing of the normalisation committee) was a cover-up. This has reinforced our position.”

There is a view that this impending decision could be detrimental to the T&T football hopefuls.

Wallace stated, “There is nothing to play for until 2021 March. That is the proposed (international) date that (Concacaf nations) may start back to play football because of covid19.

“Where we are at the moment, over the last four years, if anyone can bring the evidence to me to show players going overseas or scholarships from clubs as against schools, if anyone can show me the real fall-out, let them show me. (Even) with this ban, players can still ply their trade. It doesn’t interfere with the individual players per se.”

“If they don’t withdraw, and the 18th comes upon us, either the Council or the Congress bans the TTFA,” said Awai. “If we are banned, I think we’re looking at between two to five years.

“On the good side, it gives an opportunity to clear the table and get a proper structure (for us) going forward,” Awai added. “The bad side is that we would not be playing international games.”

Awai pointed out that creditors will still be seeking monies owed from the TTFA.

“The possibility exists that one creditor, or creditors, can file for liquidation of the company, of the TTFA,” he said. “If that happens, nobody will get any money. I’m hoping that good sense will prevail. What we’re trying to do is save the football for the young players coming up.”

According to La Forest, “FIFA (is like) your daddy, and the way we were brought up, you obey your mother and father as you go along. If these people continue to fight FIFA, the young footballers of this country are going to suffer badly. (The Wallace) administration has no regards for the younger ones, (they) are looking at themselves.”

With regards to opting out of the legal challenge against FIFA, the former national Under-17 coach said, “Everybody’s saying that. There is something called common sense. I always tell my players they sell common sense in the drug stores.”

NORMALISATION COMMITTEE chairman Robert Hadad has strongly hinted that Trinidad and Tobago will be banned from international football and FIFA funding withdrawn, should United TTFA not comply with today’s deadline to cease High Court action against the Fédération Internationale de Football Association.

“We would continue speaking to FIFA when we get our chance and we will try our best to alleviate our suspension issue, but they (FIFA) did speak to a suspension...if the matter is not withdrawn by the 16th,” stated businessman Robert Hadad when he and banker Nigel Romano were guests on Monday’s version of 195FM’s ISports programme, hosted by Andre Baptiste.

With a ban, the TTFA will be left saddled with a $100 million debt. Hadad also surmised that with an international ban, the only way back into FIFA’s fold for T&T football would be through the Normalisation Committee.

“We remain here, in case TTFA will like FIFA to reinstate the Trinidad and Tobago Football Association as a member associate and should they want that we are the ones that will report back to FIFA that we could perform our duties free of interference,” Hadad stated.

“We firmly request the TTFA to ask to the TTFA former leadership for an immediate withdrawal of the claim at the Trinidad and Tobago High Court by 16 September 2020, at the latest. We deem that a failure to comply with this directive would result in the commencement of suspension proceedings via the relevant FIFA bodies,” Samoura stated via email.

Monday’s injunction issued by Justice Carol Gobin allowed United TTFA to proceed with its High Court court action unhindered by an attempt from TTFA delegates to halt the court proceedings via an Extraordinary General Meeting. “No meeting about the TTFA can be held by the Normalisation Committee or any other person acting on behalf of the TTFA,” TTFA attorney Matthew Gayle stated following Monday’s legal proceedings. Gayle also indicated that United TTFA plans to press on with the case.

And given United TTFA’s position and the injunction preventing TTFA members from stopping its court action, Hadad felt a ban was coming --possibly as soon as Friday when FIFA holds it 70th Congress.

With a FIFA ban, Hadad stated power will revert to United TTFA and that no funding will be provided to the TTFA.

Career banker and National Four Mills chairman Romano estimated the TTFA’s debt was made worse in the four months United TTFA were in charge and now estimated it at $100 million, inclusive of $37 million to hotels, travel agencies; $18 million to coaches; $12 million in court orders; $2million to staff; $5m to Government for NIS and so on.

The debt was increased by unfavourable but legally-binding contracts to Peter Miller, Terry Fenwick and AVEC Sport. When United TTFA hurriedly fired Dennis Lawrence in January, it also left the Association having to pay both him and his English replacement Fenwick; as well as similarly fired coaches Stephan De Four and Stuart Charles Fevrier.

He continued: “They will be faced with a lot of judgment. The debt, the way we see it, is upwards of $100 million.”