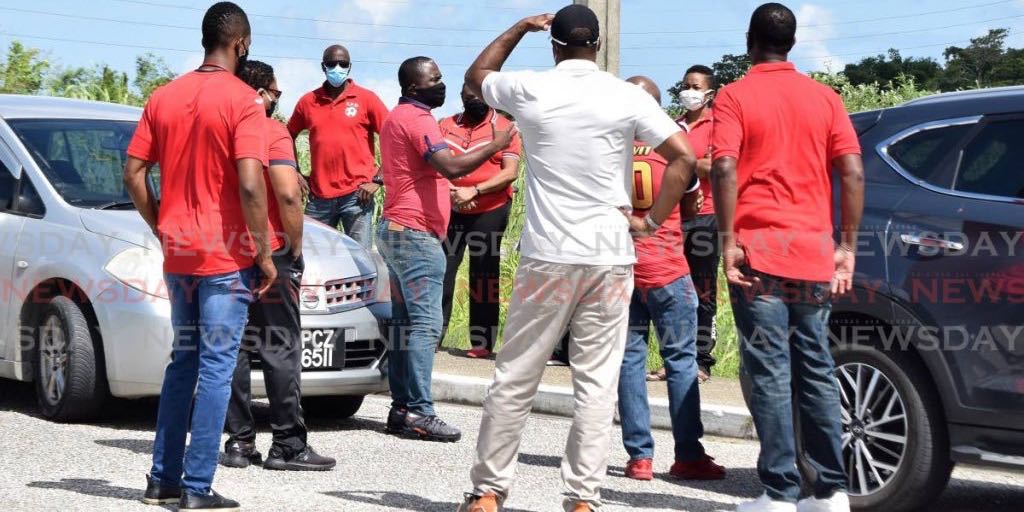 Charges of gross mismanagement of the affairs of T&T football have been levelled against the FIFA-appointed Normalisation Committee (NC) after only the first of its two-year term of office.

The same membership, who was responsible for the removal of the William Wallace-led United TTFA (T&T Football Association) from office last year, disapproves of the way the sport is currently being managed under the NC, led by chairman Robert Hadad, including the non-payment of salaries to the staff, players and coaches of the senior national men's team which is well into the FIFA World Cup Qualifiers for the Qatar World Cup 2022; no audited and compliance committee, no annual general meetings (AGM), no audited financial statements for the year ended December 31, 2020; increasing debt and poor financial management, and the mismanagement of the World Cup match against Guyana that was played in the Dominican Republic.

The game was carded to be a T&T home game at the Hasely Crawford Stadium in Port-of-Spain on March 25 but the NC's lengthy delay in putting things in place led to the government blanking the association because of the COVID-19 pandemic.

On Saturday, the members delivered a stinging 15-page document, which was also sent to FIFA Secretary General Fatma Samoura, that stated the NC has failed to carry out the instructions of the sport's world governing body- to normalise T&T football and prepare it for election.

Pointing to the mandate given by FIFA, the members claim: "You were appointed on the 27th March 2020 and you were mandated by FIFA to execute the following during a two-year term: 1. Establish a debt repayment plan that is implementable by the TTFA; 2. Review and amend the TTFA Statutes (and other regulations where necessary) and ensure their compliance with the FIFA Statutes and requirements before duly submitting them for approval to the TTFA Congress; 3. Run the TTFA’s daily affairs; 4. Organise and conduct elections of a new TTFA executive committee for a four-year mandate.

"To date, either there has been no cohesive and structured debt repayment plan presented to the members of the TTFA or the members have not been made aware of such plan by the Normalisation Committee to liquidate the outstanding debts to coaches, players, technical staff, TTFA administrative staff and other creditors. Rather, there seems to be a greater concern with setting up a “Unified League” than developing and presenting a well-organised and practical debt repayment strategy as mandated."

Hadad told Guardian Media Sports in January the debt had risen from an estimated $50 million to a whopping $70 million, but his actions to contain or reduce it, have been criticised by the membership, which stated: "Since your appointment on the 27th of March 2020, there seems to be an increase in expenditure for the TTFA. In fact, Mr Adrian Romain was hired as manager of the senior men’s team however, Mr Basil Thompson was already employed as the team’s manager. As such, Mr Thompson now holds the position of Logistics Manager, a post non-existent in our Constitution. This is clearly an unnecessary expense that you have approved and it has increased the debt of the TTFA even further.

Hadad was not responsible for the appointments of the senior national team staff and coaches as they were made under the Wallace-led administration, however, T&T Futsal coach Constantine Konstin, beach soccer coach Ramiro Amarelle and women's coach James Thomas were hired by the NC.

The Wallace administration was also responsible for the appointment of the much-needed standing committees, but all of them were abandoned by the NC. The membership also sought to question this move, saying: "Article 40.2 of the TTFA Constitution states: ‘members of the standing committees shall be designated for a term of office of four years.’ It is also noteworthy that FIFA’s Statues also state that standing committees shall advise and assist the executive. FIFA, on the appointment of the normalisation committee, did not disband our existing Committees which were implemented by the previous administration. Rather, they disbanded the executive and appointed the normalisation committee. Failure to appoint the aforementioned Standing Committees has resulted in a lack of transparency and accountability with the stakeholders of the TTFA, as well as a general distrust between the members and the normalisation committee. Furthermore, the absence of the aforementioned committees undermines the integrity of the association and minimises our chances of optimal performance in the international arena.

Hadad was also accused of failing to run the daily affairs of the sport and has not put together development programmes for the country's Under-13, U-15, and U-17 football teams, as well as a programme for the women's teams.

Meanwhile, national coach Terry Fenwick, despite leading the Soca Warriors to four points in two matches to date, has come under fire for an alleged incident on the eve of the team's departure for matches against Guyana and Puerto Rico in March. The outburst by Fenwick had been the second such incident during his stint in T&T football and the failure to deal with the recent incident against TTFA media officer Shaun Fuentes was noticed by the membership.

"As members of the TTFA, we would like to know what disciplinary measures were taken against Mr Fenwick for such aggressive and disrespectful behaviour. Is this the type of behaviour we allow to be swept under the carpet?"

Concerns about Fenwick's contract which was agreed on by the previous football administration were raised with inconsistencies and irregularities being at the top of the list, alongside reporting requirement. With no technical committee available, the Englishman reports directly to Hadad and his committee members.

Meanwhile, a release from the TTFA on Saturday said "the normalisation committee of the TTFA received a letter from the membership on May 1 which they understand and will deal with the issues this week".

The release stated: "The Normalisation process was fully allowed to function as of November 2020 and the process for any Member Association is difficult and challenging. FIFA and CONCACAF continue to guide this process as we work towards resurrecting football out of its doldrums, which has been made more complicated by the COVID-19 pandemic.

"It must be noted that many details outlined in the document are inaccurate and based on assumptions. We will endeavour to improve on the communication channels between the TTFA and its membership so that the members are provided with accurate sources of information on these matters, with the aim of fostering a stronger relationship between all parties."

OVER THE next week, the FIFA-appointed normalisation committee will address a plethora of issues raised by several members of the TT Football Association (TTFA), who accuse the Robert Hadad-led board of mismanagement and further debt accumulation.

In a statement issued on Saturday, the committee said they understood the concerns of the TTFA membership but has always been guided by the sport’s global governing body and Concacaf.

The committee’s statement came in response to a 13-page letter issued by eight TTFA members to Hadad, which highlighted an array of questionable administrative decisions.

In reply to their complaints, the normalisation committee stated, “The normalisation process was fully allowed to function as of November 2020 and the process for any member association is difficult and challenging.

“FIFA and CONCACAF continue to guide this process as we work towards resurrecting football out of its doldrums, which has been made more complicated by the covid19 pandemic.”

The committee noted that many details outlined in the document they received were inaccurate and based on assumptions.

“We will endeavour to improve on the communication channels between the TTFA and its membership so that the members are provided with accurate sources of information on these matters, with the aim of fostering a stronger relationship between all parties,” the committee’s statement read.

The Hadad-led team, however, said that it was unfortunate that the members’ letter, which was sent internally, found its way into the public domain.

The committee’s statement concluded, “Trust between the TTFA and its membership is paramount to developing this strong relationship and we believe that by working together earnestly, it can be achieved.”

Meanwhile, the letter penned to Hadad by the troubled members took to task both the actions and inactions of his team during their stint at the helm of T&T football.

Hadad was chosen by FIFA to run the affairs of TT football, in March 2020, after the world governing body disbanded the then executive led by former president William Wallace.

FIFA removed Wallace and his administrators after an independent auditor stated the TTFA “faced a very risk of insolvency and illiquidity” owing to “financial mismanagement and massive debt”.

Hadad’s mandate, by FIFA, was to run the TTFA’s daily affairs and to establish a debt repayment plan implementable by the TTFA.

He was also required to review and amend the TTFA Statutes (and other regulations where necessary) to ensure their compliance with FIFA’s Statutes and requirements. Additionally, he was tasked to organise and to conduct elections of a new TTFA executive committee for a four-year mandate.

However, according to the letter, undersigned by eight TTFA members, they believe that neither of the above mentioned objectives was ever addressed by the committee.

They also questioned several decisions made by the normalisation committee to delay the TTFA’s annual general meeting, its non-appointment of audits, external auditors, compliance and technical committees and the absence of standing committee members.

Coaches’ salaries (both owed and overpaid), TTFA’s debt repayment plans, its Statutes and even its inability to secure the March 25 World Cup qualifier against Guyana on local soil were also among the many issues raised in the letter to Hadad.