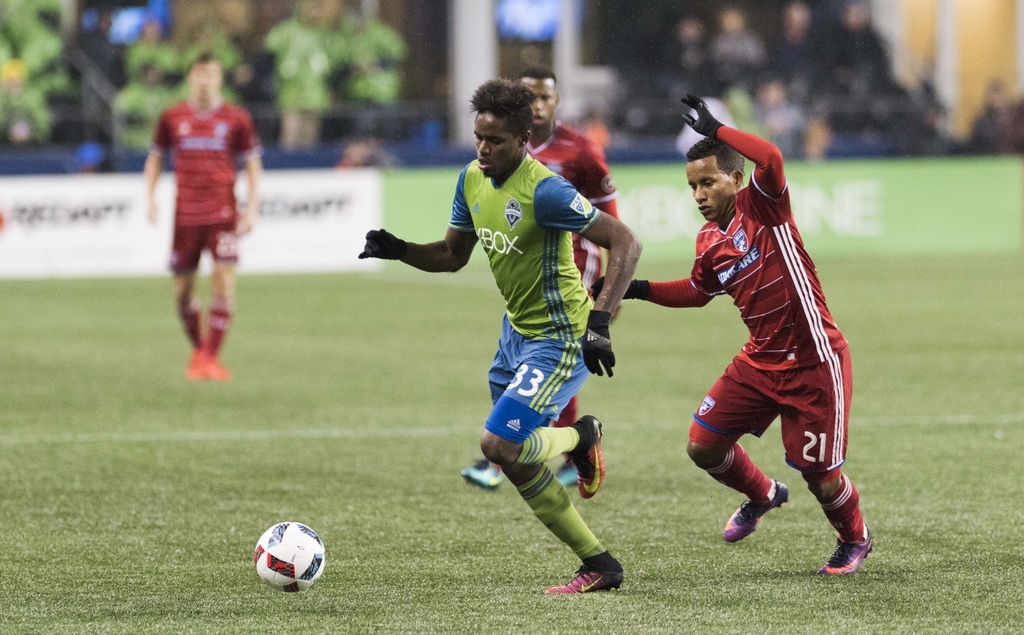 A year ago, Joevin Jones was cleaning out his locker with Major League Soccer's worst team — the Chicago Fire.

Now, the lightning-quick Trinidad & Tobago native is assisting on some of the biggest goals in Seattle Sounders playoff history.

In the knockout round 10 days ago, it was Jones' left-footed cross to Nelson Valdez in the 88th minute that netted the lone goal in a 1-0 victory over Sporting Kansas City.

And last Sunday, that Jones-Valdez combination worked in the same manner. Charging up the left sideline, Jones' cross hit Valdez's head in stride for the game-winning goal early in the second half of a 3-0 victory over top-seeded FC Dallas in the first leg of a Western Conference semifinal series.

"(Valdez) always attacks crosses. He is always in the right position. He knows where to run. And he is experienced enough," Jones said. "I am happy to serve balls in there."

Valdez certainly has been a key trigger man in these playoff matches. But Jones' contributions — three assists — have not gone unnoticed.

"Joevin is probably been our unsung hero," Seattle midfielder Cristian Roldan said. "He's been good throughout the year, but he's come up big in the playoffs."

It took a full season for the Sounders to eventually find DeAndre Yedlin's replacement at left back.

Last season, Tyrone Mears primarily played was the left-side defender, but shifted over to right back in 2016 after the team jettisoned aging defender Leo Gonzalez in the offseason.

That left a starting position open — one the Sounders filled in a trade last January.

After an 8-20 record, the Fire cleaned house, bringing in new general manager Nelson Rodriguez and new coach Velijko Paunovic, who wanted to retool the roster immediately.

Seattle sent its 2016 first-round pick and allocation money to get Jones. Chicago turned that pick into getting defender Jonathan Campbell. The Fire also eventually traded for Brandon Vincent to play left back.

"It's tough for me to say, 'Hey, we got the better end of that because they got a bunch of assets which they wanted to rebuild," Sounders general manager Garth Lagerway said. "Anytime you have a new regime coming in, they are going to have different opinions of certain players."

That's not to say the Sounders aren't giddy about the return in Jones, who fits in well with nucleus of excitng young players, along with Roldan and forward Jordan Morris.

Jones is an attacking left back who has the speed to play deep at both ends of the field.

Lately, that effort has improved. Jones has also been playing with a broken toe throughout the summer and early-fall months - one that has required "three or four injections before every game," he said.

"(Jones) has always been committed (to playing defense)," new Sounders coach Brian Schmetzer said. "He is a very good (one-on-one) defender, but people might forget that with all the flash and attention he's gotten with the assists and attacking movement."

Now a veteran on the Trinidad & Tobago national team, Jones is enjoying his first season with an MLS organization greatly supported by a raucous fan base — and one that is set to make a long run in the postseason.

"Seattle ... the atmosphere is awesome. You don't get to play in an atmosphere like this often," Jones said. "I landed in a great position. I am moving forward in the right direction in my career. It is a blessing."