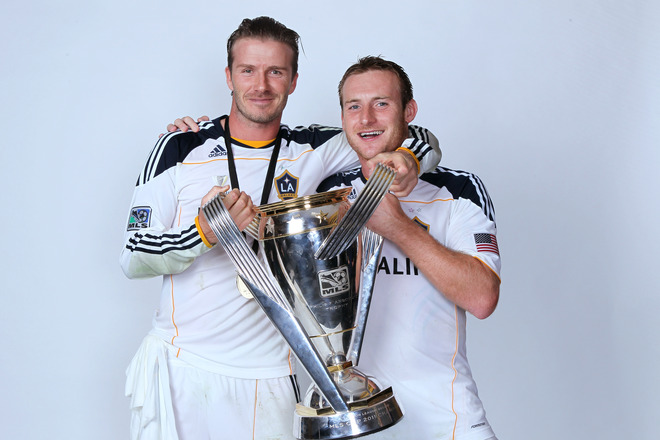 Despite the huge disappointment of leaving Port of Spain after T&T’s exit from the 2014 World Cup campaign, Chris Birchall had a lot more to celebrate on Sunday along with fellow Englishman David Beckham as they lifted the 2014 MLS Cup following their win over Houston Dynamo.

Birchall saw second half action as the Galaxy labored to victory. “It’s a huge victory for us,” Birchall said. “There is no greater feeling, especially for a player like myself and David to come to the United States and enjoy such thrill. After going to the World Cup with T&T, this definitely has to be up there with my greatest moments as a player.

“I’m still very saddened by our exit from the 2014 campaign and I thought for a while that it would take me a very long time to get over that and it still will after we finish celebrate this Cup win,” said the ex-Port Vale man. “I look forward to playing for T&T.

A lot of my teammates play international football and to them it’s a bit of a surprise that we’re out so early but it’s also like a bit difficult to understand. I don’t know if I can see us getting out of this hole anytime soon even though I would hope we could.

But we first need to work out the problems rather than just create more by fighting among ourselves. In any country where you want to attain success in football, you’ve got to iron out your problems with as much help and togetherness rather than just having a big squabble,” Birchall added.