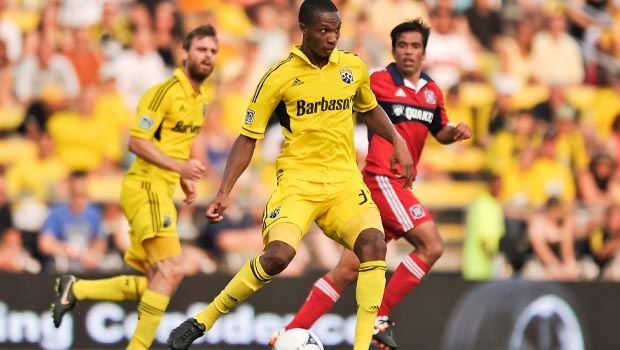 It wasn’t necessarily because he was relieved the match was over, but more of a chance to reflect on the trajectory of his first professional season, one that over the previous 10 days saw him go from a player not even on the travel squad for a recent West Coast trip to one starting a pair of matches.

The Trinidad and Tobago native, who grew up in Georgia before attending the University of Central Florida, was in Columbus watching the Crew play at San Jose on May 19 when midfielder Milovan Mirosevic suffered an injury that ruled him out of upcoming games.

George was summoned to meet the team in Seattle and got in one practice with the squad the day prior to the match on May 23.

In that game, defensive midfielder Danny O’Rourke sprained his ankle just before the half and just like that, George made his MLS debut, helping the Crew to a win 2-0 for their first victory over Seattle in seven tries.

“He was perfect,” right back Sebastián Miranda said. “For me, he played a very good game.”

“He is a young player but he played like an old pro,” Warzycha said. “He wasn’t nervous at all.”

George said he didn’t have time to get butterflies at Seattle because everything happened so fast. It was a different story in the hours leading to the Chicago game.

“It was nerve-wracking,” he said. “I knew the plan going in and had time to think about it.”

The Crew won again and George faced another quick turnaround, being named to the starting lineup against Dayton three days after the 2-1 win.

“I’m feeling better because the coaches have confidence in me,” he said. “I’m taking baby steps.”

Defender and fellow countryman Julius James is not surprised by George’s success.

“He’s played for the [Trinidad] U-23s,” James said. “He has experience. Many people don’t know much about him but he’s a really good player. He’s a hard tackler. He’s a humble guy and he listens. He has all the attributes. He stepped into the situation and was really composed. He’s still a young kid, a rookie, but he played like a grown man.”