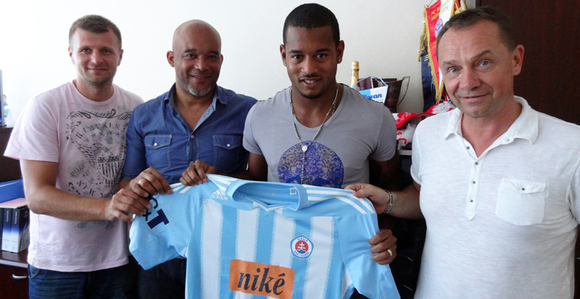 Wing attacker Lester Peltier goes to Slovan Bratislava, where he signed a multi-annual contract. The representative of Trinidad and Tobago visit on Tuesday AS Trencin club to arrange all needed matters and say goodbye to realization team and already former teammates.

"Peltier came’s in to our club as a talented player and we are pleased that in the training process succeed under the leadership of our realization team. He has become an interesting player, and we concluded that now is the best time to sale him.

We already have got offers at the autumn section of last year, but then we decided to keep him in the team. We suspected, however, that after the season will be hard to hold him in our club. We received signals even from player that he would like to change jersey.

Lester was looking for a new challenge. If he does not have the motivation to continue to improve in our club, it is better to find a way for both sides," said club general manager Robert Rybnicek.

"Despite the leaves, we believe that we will continue to bring to our fans the joy of football. We believe that already in the autumn section we bring in to the Slovak football new names," said Rybnicek and added: "I understand that many fans are disappointed with Peltier’s leave.

On the other hand is upon us and the players, whom we believed, that we have hope to bring the positive energy same as it was during the last season. Although Peltier was one of the best shooters in Slovak highest league, our game has never been built on it.

The team was not only dependent on his performances. We have always worked as a team and we will continue with that."

Peltier is grateful for the chance to play in AS Trencin

Peltier has been previously trying his luck at various clubs but  his real chance become true in AS Trencin. Trust inserted in to him we value very much.

"AS Trencin gave to me a chance to start a career and I’m grateful for it. I improved, I learned a lot, but I still have a long way to go.

Transfer in to Slovan is very important decision for me. It's like a new start. I welcome the interest of such a large club. I spent more than a year in AS Trencin.

Thanks from me is for the owner of the club Mr. La Ling and all the people around the club," said Peltier, and concluded: "The fans have always respected and supported me.

I hope they will understand my decision. My career is developing. I remain many friends and respect for AS Trencin."