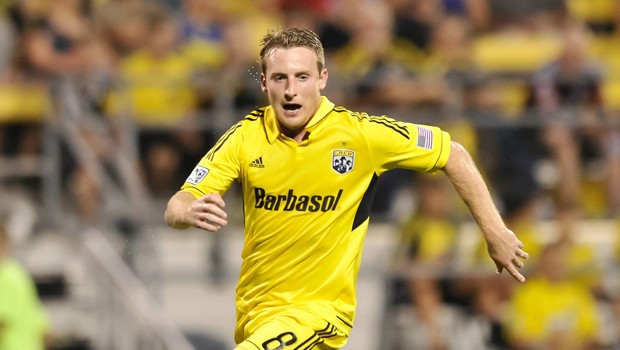 What would you be doing if you weren’t playing soccer?
“Definitely something to do with soccer. If I wasn’t playing, I’[m sure I’d be coaching or in agency work or some kind of aspect of sport because it’s been that much a part of my life. Anything else I can’t really think of.”

What’s your favorite part of Columbus?
“Just the size of it. I’m not really into big cities. I’m claustrophobic in cities where you can’t find your way around. Columbus is similar to Stoke. It’s small enough that you can get everywhere you want in 20-30 minutes. It’s a nice suburban place where I am, which is Westerville. I love the area. I can’t speak highly enough about it and it probably doesn’t get enough credit.”

So how on earth did you live in Los Angeles then?
“I tried to stay out of downtown as much as possible. All the players kind of lived in the beach towns whether it was Redondo, Hermosa, Manhattan. The guys loved it down there and it was a great place to live. Obviously here you don’t have the beach so you have to find other things to do but it’s a lot quieter. To be honest, the neighbors are probably a bit more friendly and it’s a neighborhood.”

Were you surprised when you found out you could be on the Trinidad & Tobago national team?
“It was so quick. It was toward the end of a season when I was 18 or 19. It was a question that came to me: ‘Do you have any Trinidad blood in you? Because there’s rumors going around that you have.’ I said, ‘Yeah, my mom was born there.’ Then literally the end of the season came three weeks later and I was on a plane to train in Trinidad. It was that quick. I spoke to my family about it and spoke to my mom who was over the moon. She wanted me to do it. I felt happy with trying to play at that kind of level and getting some international football against teams like the U.S.A. and Mexico. Three weeks later I was at a camp and the coach found me good enough to be on it.”

Who has surprised you on the Crew roster since your arrival?
“From playing against the Columbus Crew years ago, I always liked Danny (O’Rourke) because he’s my kind of player. We play the same position and we used to have little battles when we played against each other. I like his aggression. For me, it’s nice to think that I could play with Danny and we could both when fully fit be in the center of the midfield and make tackles and have teams be wary of us. Danny’s a player that I like. Eric (Gehrig) is coming through on defense. He’s a good player. Cole (Grossman) in the midfield is a great player. This season especially, Justin (Meram). When he’s on form, Justin and Dilly (Duka) on the wings really can get at players. They’re skillful and they can get shots off. I think the young players probably need this season to add to their MLS experience and they’ll come out next season as star players. Eddie Gaven, too.”