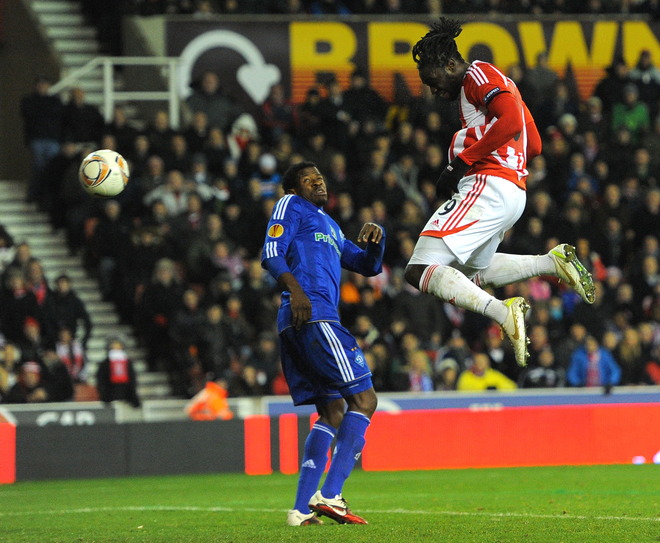 KENWYNE Jones has hit back at critics of his scoring record at Stoke City by pointing to the lack of chances on offer.

And he believes those who highlight Saturday's equaliser against Everton as his first Premier League goal in 27 appearances have overlooked the true picture.

And he only started 11 of those 27 Premier League appearances since scoring at Norwich in August last year.

"I don't know if anybody noticed, I didn't really play in the league," said Jones.

"I was just getting a few cameos, 10 minutes or whatever.

"I was playing in the Europa League and I was scoring in that.

"When I don't score, I believe I contribute massively to the cause, so I haven't been low on confidence.

"It is frustrating that I don't get to score, but the way we play I don't think we create bags and bags of chances.

"So it is tough and it is frustrating when you get that half-chance and don't score in a game. I just keep working hard and trying to score the odd chance or two."

Jones has now started the last three league games after recently returning to the first 11 for the injured Peter Crouch.

"I am happy with the impact I have made since coming back into the team," he continued.

"It does my confidence good when I'm in the team and when I'm playing.

"In a football club, your job is to be at the top of your game and to fight for your place."

He said he wasn't distracted by either rave reviews or harsh criticism from the sidelines, adding: "What fans are thinking, I don't get tapped into that. Today they want you, but not always tomorrow."

Jones is hoping to edge out former Spurs favourite Crouch at high-flying Tottenham Hotspur on Saturday – scene of a stunning Jones strike two seasons ago.

"We are going to go there to put our game plan forward, whatever it is, and hopefully we can come away from White Hart Lane with something," he said.

"This period is important. You don't want to be losing games over Christmas because that sets the tone for the second half of the season."

It had been anticipated his punishment might be more severe after two further clashes between the Belgium international and Stoke's captain.

"The charge is in relation to an incident in the 59th minute involving Fellaini and Ryan Shawcross, which was not seen by the match officials, but caught on video," read an FA statement.

"Referee Mark Halsey confirmed that he saw two further incidents in the 71st and 91st minutes, also involving Marouane Fellaini and Ryan Shawcross, neither of which he deemed to be violent conduct."