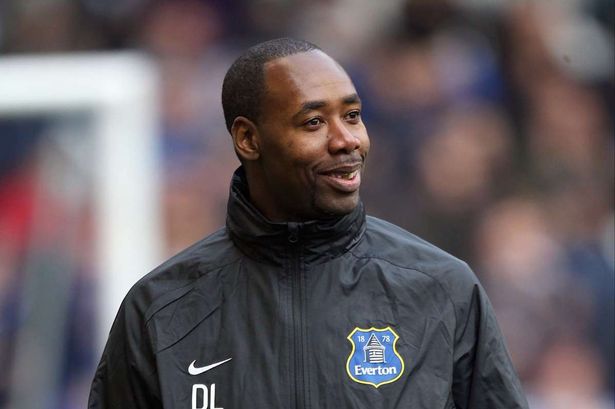 Heard the one about the World Cup legend who is now a coach at Everton – thanks to the  input of an Anfield folk hero?

If it all sounds like a tall story, April 1 was yesterday – but the man at the heart of the tale does stand six feet seven inches.

Dennis Lawrence is one of Roberto Martinez’s trusted right-hand men.

He has worked with the Blues boss since his formative days at Swansea – and Martinez has enormous respect for his work.

“I have huge, huge admiration for what Dennis has done so far,” he said. “I know he will carry on being a very influential figure at Everton.”

But whatever impact Dennis makes at Goodison in the future, it will struggle to compare to the reputation he enjoys in his native Trinidad and Tobago.

A tiny Caribbean nation of 1.5million inhabitants, Trinidad shook up the world in 2006 when they qualified for the World Cup finals in Germany – and Lawrence was the man whose goal made history.

It was also the first time that Lawrence realised he could affect matters on a football pitch with words rather than actions – after he stood up to legendary coach Leo Beenhakker.

Lawrence was the man whose downwards header against Bahrain propelled Trinidad to the finals, but the centre-back who admits his aerial ability “wasn’t the best” shouldn’t even have been in the Middle East.

Sitting back from a break in training at Finch Farm he explained: “I’ve never really told this story before, but in the last 10 minutes of the first leg – which finished 1-1 – I felt my hamstring tighten.

“We had a flight straight after the game directly to Bahrain and we went back to the hotel to pack up and I will never forget it. I came down the lift and was carrying out my luggage and our coach, Leo Beenhakker, was standing in the lobby.

“He said to me ‘Dennis I need to have a word with you.’

“We walked out the hotel door and were walking in the street and he says to me ‘I can only take a squad of 20, we have 21 players and the medical staff have told me they don’t think you’ll be fit for the return leg on Wednesday.’

“I had the experience of playing in England and I said to him ‘I’ll be fine.’

“Then we got into an argument in the street in Port of Spain about whether I would be fit or not!

“We went back in and found a little corner in the lobby of the hotel and he called the doctor over, the assistant manager and myself and he said ‘Look we’ve got a situation here. He says he’s going to be fit and you say he isn’t.’

“The doctor said ‘Look Dennis, from my medical experience I don’t think you’ll be fit.’

“But for the first time I stood up for myself and said ‘Listen Doc, it’s my body, from my experience I’m telling you I’ll be fit.’

“And to be fair to Leo he said ‘right I’m going with the player’ and he took me to Bahrain.”

Just how pivotal a decision that would be became clear in the 49th minute of a tense clash played out in a hostile atmosphere.

It might have been eight years ago, but Lawrence remembers the moment in freeze frame detail.

“I came up for a corner,” he said. “I was always the decoy for big Marvin Andrews, the best header of a ball I’ve ever seen in my life. I might be six feet seven but I wasn’t the best in the air, I have to say. But Marvin was a beast.

“But this corner, Dwight Yorke took it and we always used to say hang the ball up in the air for Marvin. I went forward and the guy marking me took two steps forward, and I thought I’m going to stop.

“Marvin was behind me and normally I would think, go on Marvin. But this time I thought I’m going to attack the ball and I attacked it and it caught my head with a clean contact. I headed it down it went through the guy’s legs and hit the back of the net.

“Euphoria. Afterwards I’m walking off the pitch and I saw Leo, I shook his hand and said ‘Never ever doubt me again Leo’ or words to that effect!”

It was the moment when Lawrence realised he could influence the outcome of a football match by what he said as well as what he did.

But it took a meeting with another would-be manager for the seeds of a career in coaching to be well and truly sown.

“It’s strange but I never really had the thought of becoming a coach,” said Dennis. “I played for Wrexham and I played against Roberto Martinez when he was at Swansea – that’s where I first met him – and he signed me when he became manager after he took over from Kenny Jackett.

“He knew exactly what he wanted. He was very detailed, very positive and we had two good seasons under him. In 2007 I started my coaching licence, went onto my B licence and ironically Roberto was on the same course.

“He had already done his B licence and he was our guest coach.

“I can always remember one of the things he said to me. He said ‘you need to get yourself ready’, because while we were at Swansea he said ‘if you want to get involved in coaching I’ll always consider you.’

“At the B licence he said ‘I think there’s a place for you on my coaching staff at Wigan.’ I completed the coaching course in May and in June he called me and told me he wanted me to join him.

“As a player he was always wanting to get on the ball and play. He’s always had that philosophy of keeping the ball and managing the game with the ball. That was probably something he was brought up with given where he comes from. That is a fantastic thing. To come from another country and put your stamp on something. It’s not easy to do.

“That multi-culturalism helps. Even though we all work in the same way and the same direction, which is headed by the manager, we all have our own little ideas that we can offer.

“He’s such an intelligent man, he always takes in information. He’s fantastic at that. He assesses it and in his own way finds a way to use it and that’s what has helped him become a top manager.”

That multi-culturalism is also something Martinez believed his budding young coach could bring to his own coaching sessions.

“Dennis is a structured, organised and disciplined coach,” said Martinez.

“He has a very, very good football eye but brings a different approach with being a foreign player coming into the English game. The angle about how you understand the British game is very different to when you are brought up here.

“Obviously he has been here long enough to understand the differences of the British game – obviously his experiences of playing abroad and in a World Cup allows you to see things from a different angle and his input is very different.

“He is reliable, and a really hard working member of the staff and the perfect figure for the Everton way.”

Which brings us to that introduction to English football – and the influence of an Anfield folk hero.

Back in the late 1990s Dennis was playing for Defence Force in Trinidad and Tobago, when their promising young goalkeeper Clayton Ince was offered a trial in England.

But the switch was initially blocked by bureaucracy.

“Wrexham wanted to sign Clayton and discovered they needed a work permit, which they didn’t really have a clue about having never signed a foreign player before,” said Dennis. “Joey Jones was the cousin of an agent called Mike Berry, and Joey said ‘Look, my cousin might have an idea.’

“So Wrexham contacted Mike who came in and was introduced to Clayton and he helped him sort the work permit situation out.

“Mike more or less said to him ‘Have you got any other players out in Trinidad?’

He clearly liked what he saw – and Dennis was at the vanguard of a stream of Trinidadian talent which headed to England, names like Carlos Edwards, Hector Sam and Ince.

Lawrence’s football career with Wrexham, Swansea and Crewe Alexandra was modest. The most celebrated football name to come out of the small Caribbean nation is still Dwight Yorke from Tobago.

But Dennis Lawrence has learned you can influence matches from off the pitch now as well.

Who knows what the future could hold for the Goodison big man...