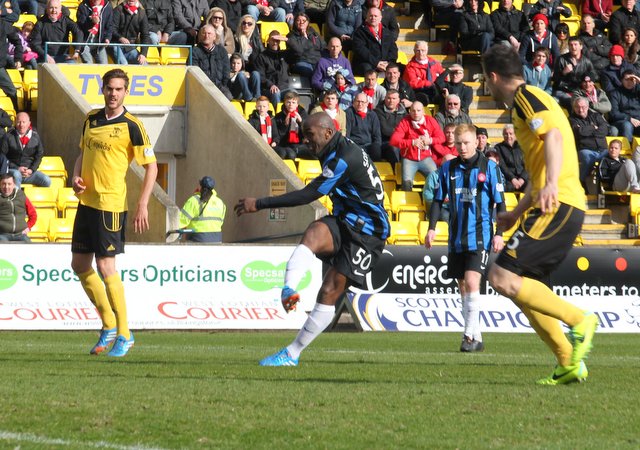 JASON SCOTLAND has warned Hibs that the pressure is all on them ahead of Wednesday's SPFL Premiership play-off final first leg.

Hamilton have momentum firmly with them after booking their place in the first ever Premiership play-off final with a 1-0 victory over Falkirk at New Douglas Park, that gave Alex Neil's side a 2-1 aggregate success over the Bairns.

It also meant that in six meetings with Gary Holt's side, Hamilton have remained unbeaten.

Scotland said: "The pressure is all on Hibs. They are a big club and the team that are in the Premiership and they have it all to lose.

"The other thing is they are on a bad run and when you are losing like that the pressure grows every week to get the win.

"They have had a fortnight off and now they need to pick it up again on Wednesday night and they will bring a big support who expect them to roll us over.

"From our point of view, we will take the game to them and if we can get the first goal that could be massive."

The 10-goal Trinidadian had warm words of praise from another outstanding goalkeeping display by Kevin Cuthbert to keep the Bairns at bay.

Scotland said: "Over the two legs against Falkirk, Kevin has made some tremendous saves, but we feel that we have had the better of Falkirk throughout the season and we have proved that we deserved to be in the final.

"Now we are there we will do everything we can to win."

With both sides tentative early on it was Accies who took the initiative with the crucial opening goal after 15 minutes.

Scotland took advantage of a David McCracken slip to cut back for Tony Andreu to side-foot home from point-blank range.

On the half hour mark the New Douglas Park men had keeper Kevin Cuthbert to thank for maintaining their lead when he pulled off a brilliant save to deny Mark Beck's flying eight-yard header at full stretch.

BUT Hamilton's inability to capitalise on their lead kept Falkirk very much in it and two minutes after Cuthbert came for and missed a Mark Millar cross, Rory Loy chipped the ball goalbound only for Ziggy Gordon to head off the home line.

In 53 minutes Cuthbert was back to his best with a tremendous flying save to deny a power back post Will Vaulks' volley before following that up with a finger-tip save to deny Conor McGrandles.

In 76 minutes, with the game stretching, Accies should have killed things off when Gordon released Louis Longridge who found sub Andy Ryan 10 yards out.

But with just McGovern to be he drove into the side netting.

But ultimately Accies' saw out time comfortably enough to book their meeting with Hibs with something to spare.

Only time will tell if Hamilton have the quality needed to make the most of the capital side's frailties but the watching Butcher will have been left with plenty food for thought after yesterday's game.

Gutted Falkirk boss Gary Holt was proud of his Bairns.

He said: "I asked the boys to leave nothing in the locker and to a man we gave it a right good go.

"But for their keeper on another day we could have scored and the outcome would have been different.

"After going a goal behind we showed real courage. It is a disappointing end to the season but I expect us to be up there challenging again for promotion."