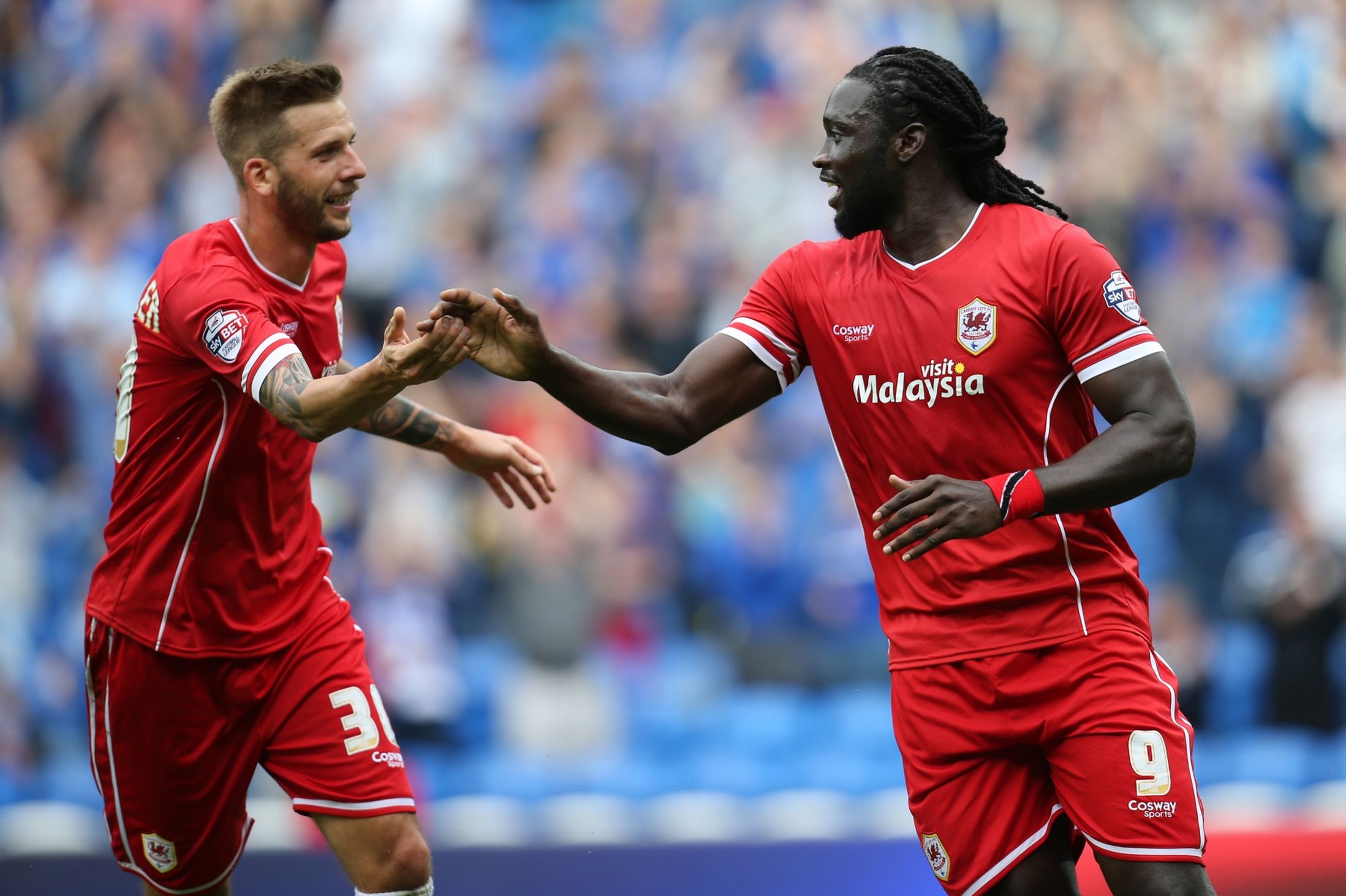 The big, powerful front man can give himself iconic status amongst fans with displays in Championship this season.

The Cardiff City striker of 2014 will probably never be held in quite the same esteem as those afore-mentioned legends when it comes to Bluebirds folklore.

But carry on at his current rate and big Kenwyne can definitely be the most recent player to join a group of fans’ cult idols which has also included the likes of Craig Bellamy, Peter Thorne, Carl Dale and Phil Stant down the years.

While no-one should be getting too carried away by that start – particularly when the opposition are as hapless as managerless Huddersfield – it’s not a bad return for a bloke pretty much written off as being down at the bottom of the pecking order when it came to Ole Gunnar Solskjaer’s glut of forward options this season.

Javi Guerra, Federico Macheda, Adam Le Fondre and a fit-again Nicky Maynard were ahead of him in the queue, so we presumed.

Jones, having been extremely average in the Premier League last season (and that’s being diplomatic) would have to make do with the odd match with the development side.

How football can quickly change. Shortly before the Championship campaign commenced, Solskjaer handed Jones the prestigious number nine shirt for the season.

That, to me, spelt out a message from the manager. With Le Fondre given 10, these two appeared to be first picks in the eyes of the Bluebirds manager, even if that raised eyebrows amongst some fans.

I always reckoned that despite what had happened in the previous few months, Jones had the physical attributes and footballing ability to become a centre-forward sensation in the Championship.

More importantly, Solskjaer was clearly of that belief, too.

Given the clamour for places in Cardiff’s huge squad, what he needed to do was grab his opportunity when handed it.

You know what, I’m delighted too. Jones copped an awful lot of flak for ineffectucal displays last season. Professionally, I threw as much stick his way as anyone.

He didn’t seem interested enough, or committed enough, to provide the goal power and leadership the Bluebirds so desperately needed from a front man to haul themselves clear of relegation.

Jason Perry, another Bluebirds terrace idol, even went as far on radio as stating Jones may have lost the desire to get beyond big, bruising centre-backs.

In other words, Perry reckoned he had had enough of the physical punishment centre-forwards receive. No-one doubted Jones’ ability, it was more a mental thing.

Well, whatever Solskjaer has been doing with his man-management of Jones this summer, it is working.

Instead of moaning about the fierce criticism he was receiving, Jones worked upon improving his fitness and his game.

And on his game this man, once on the brink of becoming a Liverpool player, has it within him to tear up the Championship.

Given the right service, and there are still issues over the balance of Solskjaer’s side, some defenders will simply find Jones unplayable at times.

Big, strong, immense in the air, decent touch on the ground, he links play and scores goals at this level. From Huddersfield corners and free kicks, Jones was also Cardiff’s best defender, invariably getting to the ball before Mark Hudson and Matt Connolly to head it away.

That’s commitment to the cause.

Given that size, stature, power, hair style and those somersault goal celebrations, Jones definitely has it within him to become an iconic figure amongst Bluebirds fans.

He already has a song, supporters slightly tinkering the words of the Spandau Ballet hit ‘Gold’ to chant: “Always believe in... Kenwyne Jones’.

So, can Jones carry on being ‘indestructible’ - another apt word from the song the supporters chant - or are we witnessing a false dawn?

I think there are a few more goals, assists and terrorising of Championship defenders to come yet.

Guerra, when he came on for Jones in the second half, looked a quality striker. As you would expect from someone who scored lots of goals in La Liga last season.

If Jones wants to hold off the challenge from the Spaniard, he needs to be full-on in every single Cardiff match.

If Jones is full-on, I’m not convinced too many Championship centre-backs can cope with him.