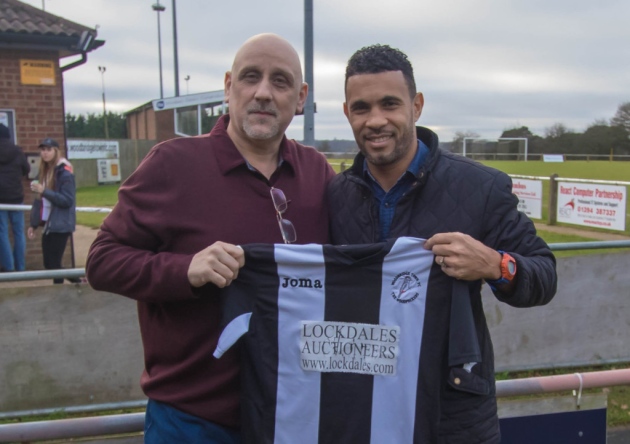 The Trinidad & Tobago international, 39, who played almost 100 times for the Caribbean island, including in the 2006 World Cup Finals, as well as more than 170 times for the Blues, is back living in Ipswich after a spell in his homeland.

He’s looking forward to getting involved in coaching, as well playing for the Woodpeckers.

It’s a new challenge, but the amiable Edwards – a big crowd favourite with Town fans during his time in Suffolk – can’t wait to get going.

“I’m glad to be part of it, as a team they (Woodbridge) are doing well, long may it continue. I just hope I don’t jinx it!

“I am going to be playing with the intention to help these guys. I’m not here to put pressure on them, some may feel a little intimidated by me, being an ex-pro. You can see it. But the more I speak to them, the more they know me.

“The way I see it, it would be unfair that having had such a long career I can’t give something back. It would be a bit selfish on my part.”

Edwards is still awaiting international clearance from Trinidad before he can make his debut for the Notcutts-based team, who are flying high in Thurlow One and look set for promotion back to Step 5.

The former Sunderland, Luton and Wrexham right-sided player has been impressed with what he has seen among the Woodbridge group.

“I took the warm-up the other day and I have trained with the team,” Edwards said.

“Even though they are in a low division to what I have ever played, these guys are passionate and have the talent. Like so many, these guys are taking time out from work and college to train and play and, from what I’ve seen, I don’t see why they can’t step up a division or two.

“They can do something with their careers if they are passionate enough to want it. I can’t wait to play and I take every game very seriously.

“If you get too cocky things can switch very quickly.

“If I don’t get my finger out and play seriously, I know, I’ll be battered. I always go on the pitch with a winning attitude.”