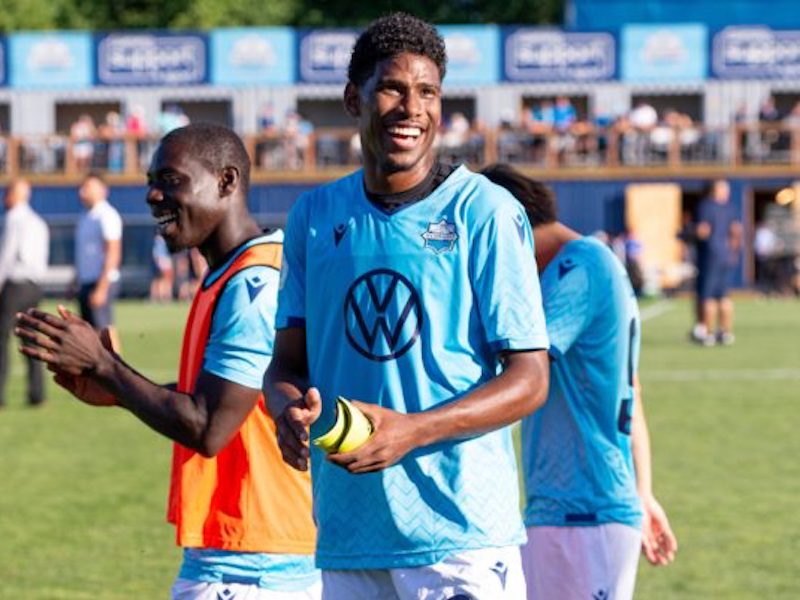 Wanderers head coach Stephen Hart has chosen three influential players from the team’s inaugural season to lead the squad into The Island Games.

Midfielder Andre Rampersad will wear the captain’s armband on the pitch, with centre-back Peter Schaale ready to take over should he not play.

Full-back Alex De Carolis has been named as the Wanderers club captain which comes with leadership duties off the pitch.

All three players are popular with the fans and have shown themselves to be inspirational characters with their teammates.

“I have confidence in them and I know they will do the job,” said Coach Hart. “The reasoning for naming three is so it’s clear that if one is substituted who will be captain, so it just saves any confusion.”

Hart’s announcement represents a huge honour for all three players who have become integral members of his roster.

Rampersad established himself as one of the Canadian Premier League’s most dependable performers last season with his box-to-box midfield game.

The Trinidad and Tobago player was recognized for that by his teammates in the club’s last match of the 2019 season, when they handed him the captain’s armband in a spontaneous gesture just before the kick-off.

“That in itself speaks volumes,” said Hart. “He has always shown a leadership edge and the willingness to make demands of players and pull them up when things are not going well. I expect him to be my voice on the field.”

The Trini midfielder said he is thrilled to get the armband.

“It means a lot and I’m going to bring everything to the table. I know I have to lead by example and be there for my team and we owe our fans this season, so we will be doing the best we can,” he said.

Another player well respected by his teammates, Alex De Carolis became a leading member of the squad last season and demonstrated his commitment during the pandemic lockdown, helping players stay connected to each other, as well as the fans through social media.

Hart notes the veteran defender’s off the field dedication is a key reason for his selection.

De Carolis, who at 27 is the oldest member of a young squad, said he’s proud to be the Wanderers club captain.

“I love this team, the fans and the club and I’m honoured. The seven returning players, we all know where we finished last season, so we have something to prove as well and we want to show everyone what we’re made of,” De Carolis said.

Peter Schaale said the trio work well together with a strong mutual respect as well as confidence in the squad as a whole going into the Island Games.

“This is a natural role for me and the three of us are leaders but you don’t have to be wearing an armband to be a leader and we have a lot of strong characters and everybody knows their job,” Schaale said.

The big German, who was captain for the Cape Breton Capers during a tremendously successful spell for the University, said his main priority as a leader will be bringing security to the team’s defence.

“We are all buzzing to get going and to try our best to bring the championship back to Halifax because I think we’re capable of doing it.”

The Island Games kicks off August 13th with a repeat of last year’s final between Cavalry and champions Forge.

Remember, you can follow the Wanderers on PEI by joining The Collective which includes exclusive first-access to the Wanderers away jersey as one of many benefits when you sign up.

And stay tuned to our social media channels for all the latest Wanderers and league news in the run up to the games.

Come on you Wanderers!