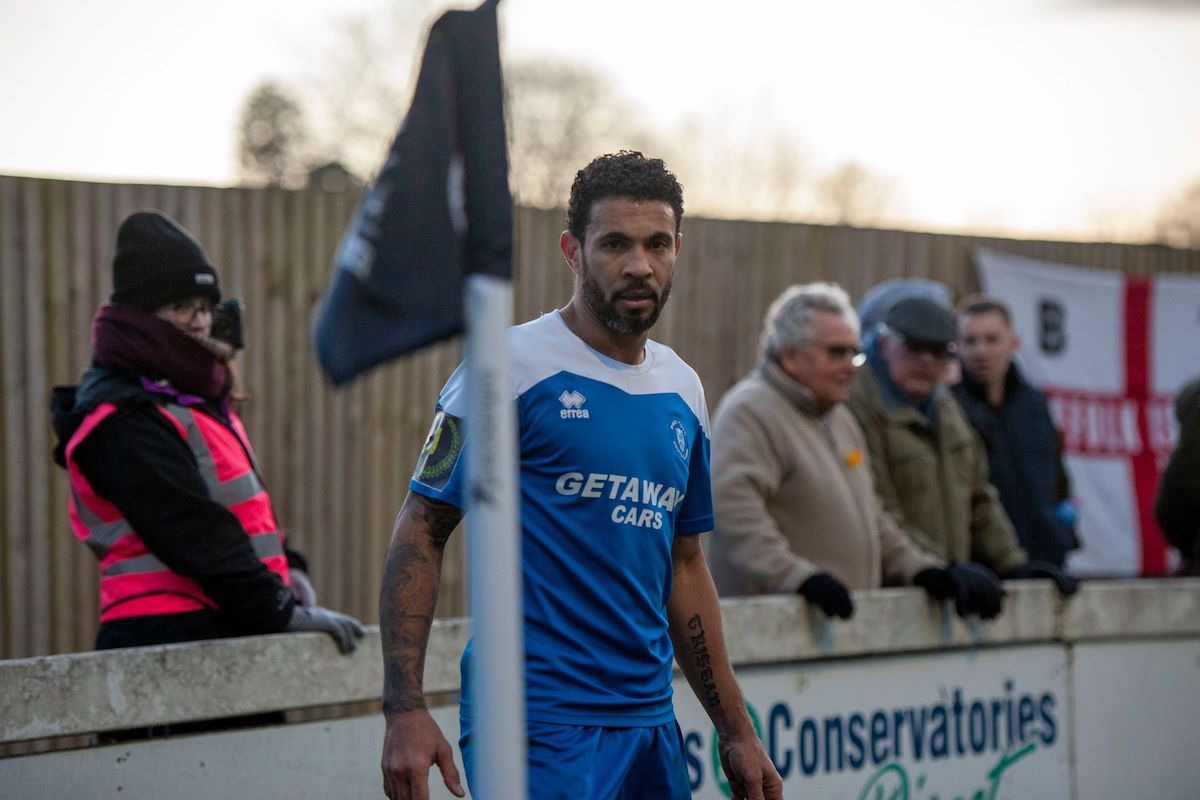 Bury Town fans had a taste of Carlos Edwards in action for their side last season, and now the 41-year-old ex-Ipswich Town star is set to play a bigger part in the Blues’ 2020-21 campaign after signing full-time for the Ram Meadow club.

Edwards turned out for Bury from last February, whenever his main club Woodbridge Town, for whom he was joint player-manager, didn’t have a fixture. It was a dual registration that worked out well for both clubs.

But the Trinidad & Tobago international is no longer part of the set-up at Notcutts Park, having stood down as manager, and so is free to turn out at Step Four for ambitious Isthmian League North outfit Bury.

Ben Chenery’s side begin their season with a trip to Northamptonshire tomorrow, for an FA Cup preliminary round tie at Step Five Cogenhoe United, of the United Counties League.

Blues boss Chenery said: “I am very pleased to have Carlos with us full time.

“His experience will be invaluable for our young side, and he is still a terrific player.

“The rest of the squad will learn a lot from him and he is a great person to have around the club.”

Veteran Edwards is still remarkably fit, for a 41-year-old, having originally begun his professional career in the UK with Wrexham in 2000. He signed for Ipswich in the autumn of 2009 from Sunderland, for a combined fee of £4m with Grant Leadbitter, and went on rattle up 192 appearances for Town, initially as a winger under Roy Keane and then as a right-back under Paul Jewell.

He is set to celebrate his 42nd birthday next month, on October 24, but should still be capable of doing a fine job for Bury Town, probably in the middle of the park.

Meanwhile, Woodbridge Town put out a statement at the start of this month, with regards Edwards, saying:

‘The Woodbridge Town Management Board have regrettably taken the difficult decision to relinquish Carlos Edwards of his managerial duties at the club with immediate effect.

‘The decision was certainly not taken lightly but one which the entire board were forced to make .... for the best interests of The Club.

‘Carlos has been playing for Bury Town on occasions that there hasn’t been a fixture clash with Woodbridge, with the consent of WTFC.

‘However, the board insist that as manager, Woodbridge Town Football Club and the required duties associated with the role should come first. This is for the benefit of the players, supporters and the club as a whole. ‘This level of commitment is a must and unfortunately it has recently become an issue that the board believe have made the manager’s position untenable.

‘Carlos has had his first taste of English Non-league football with us and we have been very fortunate to share that part of his career with him.

‘He really has been a joy to watch and has been a vital part of the team during the past three years.

‘We have been privileged to be able to gain from his experience as an ex-professional.’