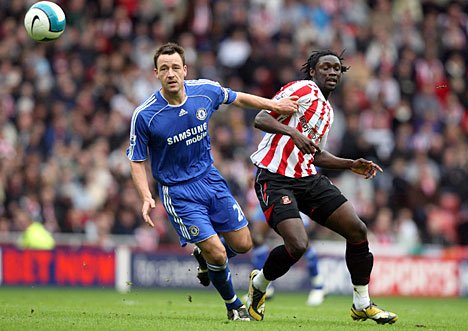 Stoke City will be anxiously awaiting the outcome of scans on an ankle injury sustained by club record signing Kenwyne Jones in their opening day defeat at Wolverhampton Wanderers.

The £8 million striker left Molineux on crutches after damaging his right ankle in a challenge with Jody Craddock just 10 minutes into his debut for the Potters.

Manager Tony Pulis confirmed that Jones will have a scan on the injury on Sunday, but could not give any indication as to the extent of the injury or how long he will be sidelined.

"We will have to wait and see what the scan shows," said Pulis. "We don't know the extent of the injury at this stage, but the problem appears to be just above his ankle.

"The injury took the wind out of our sails because I thought we had started the game brightly. But then we dropped too deep and we really shouldn't have allowed that to happen.

"For a 20 minute period after Kenwyne went off, we allowed Wolves to play where they could cause us problems and we also allowed them at the tempo which they wanted to."

He added: "Conceding two goals before half time left us with a mountain to climb, although we got back into the game and could have snatched a point in the end."

Jones' injury is likely to increase City's determination to strengthen their squad before their next Premier League match at home to Tottenham Hotspur next weekend.

Pulis revealed: "We got very close to bringing a couple more players in before this match, but it didn't happen in the end. We do need more goals throughout the team though."