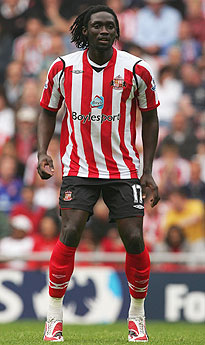 Stoke City have been handed a major boost after record signing Kenwyne Jones was cleared of having suffered a serious ankle injury in the season-opening 2-1 defeat at Wolves.

The 25-year-old £8million recruit from Sunderland lasted just over ten minutes of the Molineux clash, amid fears that he could be facing a lengthy lay-off.

However, subsequent scans and X-rays have revealed only minor ligament damage to Jones' right ankle.

Manager Tony Pulis told the club's official website: "The news is as good as we could have expected in the circumstances.

"We were obviously very concerned about the extent of the damage over the weekend, but the tests have shown only minor ligament damage.

"We will assess Kenwyne's progress over the next few days, so it is hard to say how long he will be out, but we are talking days, rather than weeks or months."

New Stoke striker Kenwyne Jones could be back in action in days after a scan revealed he suffered only minor ankle ligament damage on Saturday.

It was first feared Jones could be out for weeks after suffering the injury on his debut in the 2-1 defeat at Wolves.

"The news is as good as we could have expected in the circumstances," said Stoke manager Tony Pulis.

"It is hard to say how long he will be out but we are talking days, though, not weeks or months."

Jones, who joined Stoke from Sunderland for a Potters club record £8m on 12 August, lasted barely 10 minutes of his first match following a challenge from Wolves' Jody Craddock.

He looked really good for the 15 mins he was on the pitch on Saturday. This has made my day!!!!

He subsequently underwent a series of scans and X-rays on Monday, which revealed the 25-year-old Trinidad and Tobago international had not suffered any serious damage.

Jones almost made an immediate impact in his brief bow for Stoke, crashing a shot against the woodwork.

Pulis admitted that the injury to Jones had affected his team, who conceded two first-half goals, scored by David Jones and Stephen Fletcher, before grabbing a consolation through Abdoulaye Faye.

Stoke's next match is against Tottenham on Saturday at the Britannia Stadium.