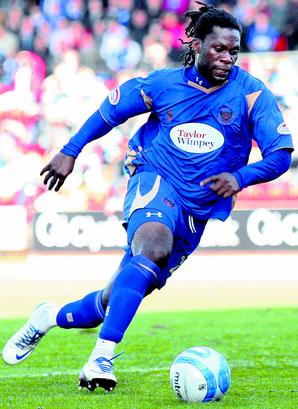 Collin Samuel already knows the secret to cup success against Hearts - but insisted that he doesn't mind who gets the glory this weekend, just as long as it's St Johnstone who progress to the next round.

St Johnstone are the visitors to Tynecastle this weekend in the fourth round of the Scottish Cup and Samuel would love to repeat the heroics which saw Falkirk knock Hearts out of the competition back in 2003.

The St Johnstone striker was on the Bairns' books back then and netted three times to send the Jambos out of the cup, with Owen Coyle scoring the only other goal in a 4-0 victory.

All four goals that day were scored in the opening 31 minutes at the old Brockville Stadium and Samuel admits that it is a game he will never forget.

While he would love to repeat that feat, he insists he would be more than happy with just one goal, just as long as its Saints who progress.

The Trinidad and Tobago hitman said: "It's the first time that I have come up against Hearts in the cup since I scored that hat-trick, so hopefully it will be a good sign for us.

"All I remember from that day is that I was determined to go out and score the first goal - I hadn't even thought about a hat-trick.

"It was my first Scottish Cup game and I just wanted to score because I knew how important that first goal could be to Falkirk's chances of going through. It's the same this weekend. All I want is to score the first goal but I don't mind who scores the goals, just as long as we get through.

"We know that they will be a hard team to play, especially at the moment, but if we can get the first goal then we will give ourselves a good chance."

Samuel has so far scored only twice for Saints this season, his second of the campaign coming in the 1-0 win over Inverness last weekend and he conceded that he is keen to add to that tally over the coming weeks.

However, he knows his side face a difficult task against one of the form sides in the SPL: "Of course I would like to get more goals, I think that every striker would say the same.

"I was pleased to get the goal at the weekend because it was an important win for us and I was delighted to be able to score the goal that got us the points."

"The game against Hearts this weekend is probably one of the harder ties that we could have been given but we are looking forward to it. They are on a good run right now so it should be a good test for everyone and a good atmosphere because Tynecastle is always a great place to play.

"It's good to go into this game off the back of a win last weekend as well.