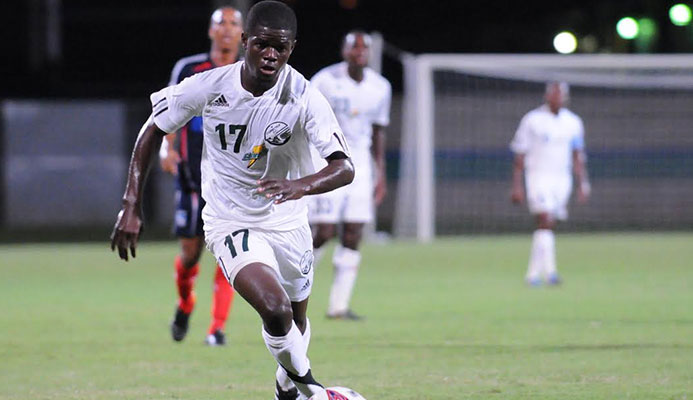 Former champions Morvant Caledonia United and W Connection will tackle each other when the final of the 2016 Lucozade Sport Goal Shield (LSGS) unfolds on Sunday April 24 at the Hasely Crawford Stadium.

Last night Caledonia defeated Police FC 3-1 in a penalty shootout at the Ato Boldon Stadium thanks to the heroics of Trinidad and Tobago international goalkeeper Marvin Phillip following a 1-1 draw in semi-final one to secure their first final in three years, since winning the FA Trophy in March 2013.

And in the second semi-final at the Couva venue, Connection dispatched holders Central FC 4-2 to move within one win of their third major trophy this season, after the First Citizens Cup and Toyota Classic.

Hughtun Hector scored twice and assisted in another, all in the second half, as the 2009 and 2013 LSGS champions W Connection rallied from a goal down to beat their Couva rivals twice in a space of four days, with the previous a 1-0 win on Tuesday in the Digicel Pro League to move three points within leaders Central thanks to the solitary item scored Hector on his Clásico debut.

Central possibly thought revenge was in the making after Jason Marcano fired the "Couva Sharks" ahead from close range to beat goalkeeper Terrence Lewis in the 7th off Nicholas Dillion's short cross last night.

But the "Savonetta Boys" levelled the score 1-1 in the 19th minute when Alvin Jones thumped a 23-yard free-kick, which clipped to wall, to beat goalkeeper Akel Clarke.

Then Hector, who had a strike inches away from giving Connection the lead five minutes before the break, finally put coach Stuart Charles-Fevrier's side in front 2-1 in the 61st minute when he curled a shot beyond Clarke and into the far netting.

It was from a play inside the right of the box that winger Neil Benjamin attracted the attention of the “Couva Sharks”’ defence before slipping a pass to midfielder Andre Toussaint who fed a pass to a free onrushing 31-year-old midfielder and captain Hector for the go-ahead goal.

Fifteen minutes later Clarke denied Toussaint his name on the scoresheet with a save out of the top corner.

But from the resulting corner swung in by Hector, substitute Briel Thomas headed past Central goalkeeper to put Connection 3-1 ahead.

Central, however, did get a lifeline with nine minutes left when Connection defender Maurice Ford headed back into his own net to reduce his side's lead to 3-2 in a suspected attempt to play a cross ball to his own goalkeeper, Lewis, who had already rushed off his line.

But it all came to a crashing halt for Central – their third straight loss against Connection – when Hector snatched his third goal of his first two career games against the "Couva Sharks" this week, since returning to the Connection squad in the January/February transfer window following a five-year stint in Vietnam.

Hector, at the end of goalscorer Jones’ pass, made it 4-2 in the second of four minutes stoppage-time after the latter had showed great speed on a counterattack down the right before turning into the area and feeding a pass to his captain.

In the earlier game, former Connection goalkeeper Marvin Phillip produced two saves in the penalty shootout, first denying Police captain Todd Ryan then Makesi Lewis on the third, and possibly enough intimidation to force Dexter Alleyne to put his kick onto the crossbar, to help the 2012 LSGS champions, Caledonia, reach the this season’s final.

T&T third choice goalie Adrian Foncette was between the sticks for the "Lawmen" but provided just one save, denying Robert Primus on the third after Kareem Joseph had struck the upright on the first, but was unable to keep out strikes by Akim Armstrong, Sheldon Holder before Pernell Schultz sealed the penalty win for Caledonia.

Shultz, the 22-year-old Guyana international, had given the “Morvant Stallions” a 1-0 lead a minute before the break.

With a clinical curling left-footed strike into the bottom corner after controlling a pass from Kareem Joseph, Shultz left Foncette, who had earlier denied Joseph, frozen on his line.

Caledonia later lost attacker and double-scorer against Defence Force in the quarter-finals, Jameel “Shooter” Neptune, through injury—unable to continue beyond the hour mark.

His replacement Taje Commissiong won Caledonia a free-kick at the edge of the box with seven minutes left and the game tied at 1-1 after Kareem Freitas hit past Phillip in the 77th minute from the top of the six-yard area to clean up after a failed attempt from substitute Dylon King.

Kareem Joseph rattled the Police crossbar in search of the winner from the free-kick, unable to avoid the penalty kicks in the end when he denied again by the frame but finishing on the winning side.

Caledonia returns to play on Tuesday against leaders Central FC from 7pm at the Hasely Crawford Stadium in league action, prior to a 9pm kick-off between Defence Force and North East Stars at the Port-of-Spain venue.

Also on Tuesday, W Connection will contest San Juan Jabloteh from 8pm at the Ato Boldon Stadium, following a 6pm kick-off between Club Sando and Police.

League play continues on Wednesday with St. Ann’s Rangers against Point Fortin Civic from 4pm at the Larry Gomes Stadium.