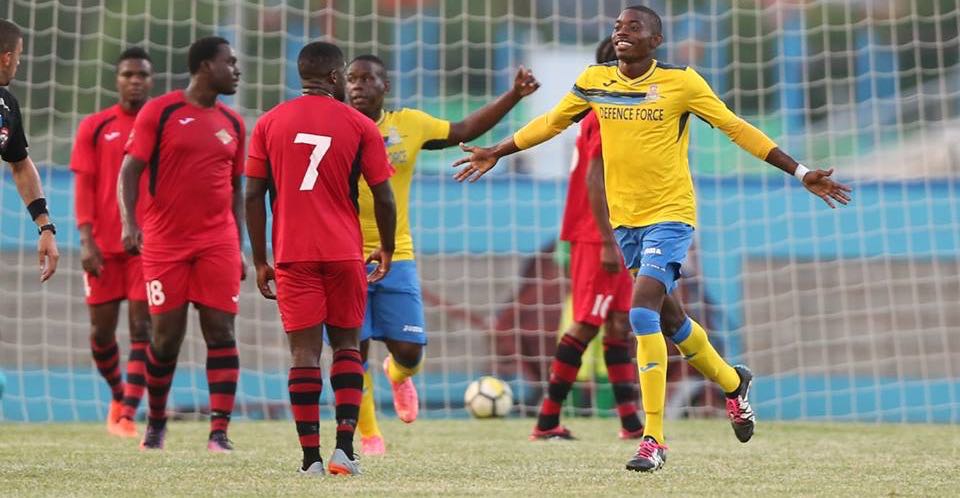 Dylon King bagged two goals separated by a Reon Moore item and the break before debutant Brent Sam arrived off the bench to slap home the soldiers’ fourth item against his ex-club.

Earlier, Akim Armstrong scored twice on his domestic debut for two-time former champions Central FC to give the Stern John-coached Couva Sharks a 2-0 win over MIC-IT St. Ann’s Rangers who must next face the fury of Defence Force on June 18.

Central, boasting the likes of Densill Theobald, Anthony Wolfe, goalkeeper Marvin Phillip, Jared London and Duane Muckette, were the more experienced of the two sides but for the opening moments looked nothing of a team keen on shaking off disappointments of the 2018 Caribbean Club Championship finals in Jamaica last month when they failed to qualify—after three chances—for this season’s Concacaf League.

It was not until the stroke of the half-hour mark that Muckette and Keron Cummings tested Rangers number one Cleon John who made two excellent saves.

John, though, was unable to rescue coach Adrian Romain’s side four minutes from the half when as Central grabbed a 1-0 lead. Armstrong’s angled a shot (which flew into the far bottom corner) came at the end of a Couva Sharks’ move that involved no less than a dozen passes as they ran circles around Rangers.

Rangers, five minutes earlier, had created an excellent scoring opportunity through an ambitious move down the right by Kristian Meloney whose low cross across the six yard box should have been met by forward Jamal Gay.

Meloney, one of a handful of Pro League debutants in the Rangers side, later had a chance himself on the hour mark but goalkeeper Phillip was quick to smother the midfielder’s effort.

Eight minutes later on the other end Armstrong, who two months ago moved to Central from Club Sando, was celebrating a double after he got the better of defender Holan Joseph to lift the ball over John and into the back of the Rangers net to put the score at 2-0.

Armstrong was denied a third from point blank range with fifteen minutes left when John pushed the Central forward’s half volley behind.

But John’s younger brother, Christopher Biggette, had to fetch the ball out of the Jabloteh net twice in quick succession early on and four times in total in the second game against Defence Force.

King led the Defence Force rout with the opening goal on 12 minutes when he climbed in the Jabloteh box to meet a floated right side cross from debutant Kathon St. Hillaire after veteran forward Devorn Jorsling failed to make contact to a low feed from the left by Moore.

Moore then quickly cushioned the Marvin Gordon coached-soldiers 2-0 two minutes later after he dispossessed defender Jamal Spencer of the ball and made a solo run into the box before sending a shot into the Jabloteh net.

King, who flashed an effort just wide before the break, would finally get to his double in the 67th minute to make it 3-0, burying the ball past Biggette who had denied Hashim Arcia a second time on the night, but the latter attempt only landed the ball as far as the eventual double scorer.

Substitute Sam made it 4-0 in the 73rd minute, blasting the ball past a hapless Biggette after picking up a short feed from Arcia. Sam however failed to complete a double against his ex-club when he rolled a shot onto the upright in the final minute of regular time.

“If you remember [during] the (First Citizens Cup) launch I talked about playing Jabloteh in the pre-season and dominating them and it was just a matter of coming tonight and getting the business [done],” Gordon said after his side’s win.

“[The result] wasn’t strange for me,” added the Defence Force coach. “I know what I have in my dressing room and I thought [my] players were brilliant tonight.

“I thought we could have scored some more goals but Jabloteh didn’t come and lie down. They have a young squad, they tried to work hard and be competitive, but tonight you saw the quality that I have in my dressing room and the work me and my staff have been doing over the last two months.”

Next Saturday the First Citizens Cup action will resume when defending champions W Connection meet North East Stars, the side they crushed 7-1 in the Charity Shield, for a second time in three weeks from 4pm, and Morvant Caledonia United kicking off their 2018 campaign against Point Fortin Civic from 6pm in an Abercrombie Group double-header at Ato Boldon Stadium.

The Couva venue will come alive again on Monday 18 June with an Immortelle Group double-header with Club Sando taking on Jabloteh from 8:30pm following the Defence Force versus Rangers clash from 6:30pm.