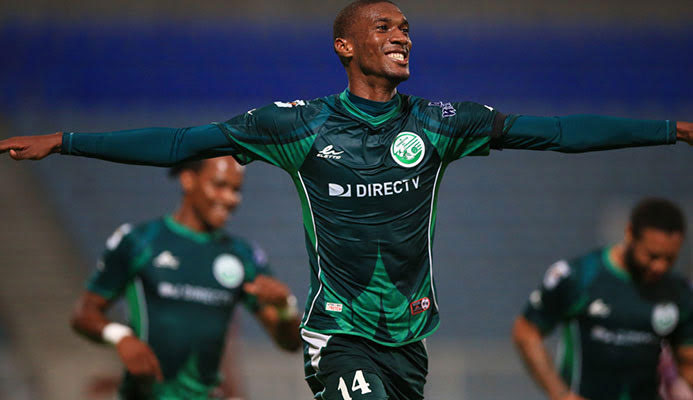 Hashim Arcia struck eleven minutes from time at the Ato Boldon Stadium on Friday night to celebrate his first goal against former employers W Connection to give Defence Force FC a crucial 1-0 win in the final push for a 2017/18 CONCACAF Champions League qualifying spot.

The 27-year-old attacking midfielder executed a low right-footer beyond goalkeeper Julani Archibald and off the far upright to break the deadlock against the ‘Savonetta Boys” he had served for five years before switching to Defence Force this season.

With Digicel Pro League holders Central FC (52 points) four points clear at the summit with three games in hand and only a win away from repeating as league champions, four teams – Defence Force, San Juan Jabloteh, North East Stars and W Connection – were left in a squeeze for a top-two finish which qualifies teams into the Caribbean Football Union (CFU) Club Championship, which also serves as the Caribbean qualifier tournament towards the CONCACAF Champions League.

Central, who recently repeated as Caribbean champions and will be joined by W Connection and Haiti’s Don Bosco FC at the 2016/17 CONCACAF Champions League, will attempt to secure the DPL repeat by Sunday with a win against North East Stars at the Mannie Ramjoh Stadium (kick-off time 4pm).

But North East Stars (44 points), led by former Central coach Ross Russell, are on a seven-game winning streak in the league and, like the teams above them, the “Sangre Grande Stars” are hoping to keep alive their chances at the highly sought-after CONCACAF Champions League qualifying spot.

Inspired by the recent goal-scoring feat of Kerry Baptiste, North East Stars are chasing maximum points against Central and Jabloteh in their remaining league fixtures, while Connection (43 points) have remaining games against Club Sando and cellar-positioned St. Ann’s Rangers.

Defence Force (48 points), with full points earned against Connection, returned to second position on the league standings but only ahead of third-positioned San Juan Jabloteh on a superior goal-difference, after the “San Juan Kings” had temporarily leapfrogged the Army/Coast Guard combination with a 4-1 hammering of Club Sando in the earlier game at the Couva venue.

Marvin Gordon’s Defence Force have just one remaining game against Morvant Caledonia United, while Jabloteh with remaining games against North East Stars and Central face a tough road to the end but have six points to play for and the best mathematical chance of securing a top-two finish after the “Couva Sharks”.

Jabloteh midfielder Keyon Edwards made the best of a rare start in recent months by scoring a double – netting on either side of the break from distance – while forward Jamal Gay and winger Nathan Lewis finished with a goal each in the Keith Jeffrey coached-side’s eighth league win from a 9-game unbeaten streak in the DPL.

Edwards, who last scored on January 12 in a 3-2 win over Point Fortin Civic and only had two goals to his name this season prior to kick-off, fired off the post from distance to put Jabloteh 1-0 ahead after 15 minutes and a missed penalty strike by Jamaican Adrian Reid five minutes earlier.

Reid (A), usually clinical from the spot, rolled his effort wide of goalkeeper Jason Belfon’s upright after Nathan Lewis was brought down in the area by defender Kemuel Rivers.

Jabloteh then grabbed a 2-0 cushion in the 36th-minute when forward Jamal Gay snapped a two-month dry spell by executing a cool finish past a hapless Belfon for his ninth league goal after shrugging off a challenge from defender Corneal Thomas to win a deep pass and enter the area.

Sando, who have already consolidated their seventh position finish in their DPL debut season, pulled a goal back in stoppage-time of the first half through forward Devon Modeste who controlled a Shaquille Holder cross off his chest before slipping beyond two challengers and slapping home past goalkeeper Andrew Durant for a 1-2 deficit.

But Edwards, with a cool finish from distance off a short corner by winger Tyrone Charles, sailed the ball beyond goalkeeper Belfon for a 3-1 Jabloteh lead to complete his double.

Charles, completely unmarked, missed his opportunity to join the scoresheet on 68 minutes when he headed wide of the upright off substitute forward Brent Sam’s perfectly placed cross.

Then in stoppage-time Nathan Lewis, who was denied by the upright in the 72th-minute, made it 4-1 by curling the ball beyond Belfon for his 13th league goal this season after a move down the flank and weaving past defenders Kevon Neaves and Moron Phillip to enter the area.

But the night still young to celebrate, and in the 79th-minute of the second game Arcia broke the deadlock against Connection for only his second league goal this season to put Defence Force ahead.

Arcia, who had sliced an effort high seven minutes inside the second half off a deflected Devorn Jorsling pass, redeemed himself following a move involving Jorsling and feed from Akeem Roach.

Roach had best chance of the earlier half with two bites of the cherry in the 8th-minute from just outside the six-yard area but Connection defender Alvin Jones got his body across the goal to deflect the midfielder’s second attempt over for a corner.

Connection, minus head coach Stuart Charles-Fevrier who is believed to be away on personal matters, also stood without midfielder Hughtun Hector and forward Shahdon Winchester while attacking midfielder Jomal Williams was scratched from the starting eleven but entered off the bench in the second half.

However Defence Force goalie Sheldon Clarke was invincible, shutting out a close range blast from St. Prix in the 75th-minute and another point blank save against the St. Lucian in the 83rd-minute before making a crucial stop two minutes later when he won the ball at midfielder Briel Thomas’ feet following a Connection free kick into the area.

Defence Force substitute Richard Roy had the last best chance of the contest in stoppage-time but Archibald brilliantly matched the forward’s effort towards the near post.

Jamaal Harvey opened the scoring in the 24th-minute for the recent Lucozade Sport Goal Shield champions at the Mahaica Oval before Akim Armstrong converted from the penalty spot in the 45th-minute. Kyle Bartholomew wrapped up the win with an 88th minute item.