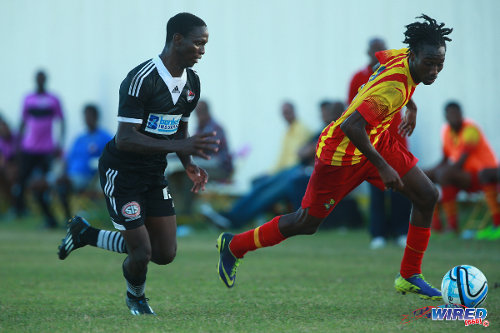 Central's bitter Couva rivals and last season's runners-up only by a point less than the champions, W Connection, in the second game of the night's double-header, defeated Club Sando 3-1 for their third straight win from as many games this term and are the only team perfect at the top of the standings.

Neil Benjamin Jr. ended the rain-soaked night with a second-half double and an assist after setting up Suriname international forward Dimitri Apai’s opening item for the Savonetta Boys, while Keyon Edwards grabbed the lone Sando item.

In the earlier game, however, it was one-way traffic as Central ran away with the biggest win of the season to date.

Sean De Silva opened the scoring and set up Taryk Sampson's first Couva Sharks goal on a night that Johan Peltier and 2006 World Cup defender Carlos Edwards also put their names on the scoresheet before Jason Marcano completed the rout from the penalty spot.

It turned out a very cold night for Adams, whose onion bag was stretched five times by the serial champions after earlier rainfall forced a late start to the match, due to waterlogged corners of the pitch.

The intervention of Trinidad and Tobago Football Federation (TTFA) president David John-Williams led to the successful pumping out of the water and the eventual start to the night's double-header.

Central proved the warmer of the two sides and could have taken a two-goal cushion within the first five minutes with both chances falling to De Silva.

The Couva Sharks’ skipper, however, redeemed himself on the half-hour mark with a cool finish past Adams to find the far bottom corner after slipping free inside the right of the Civic area.

Civic, boasting a couple new talents in offence and the return of central defender Andre Ettienne as captain, were carved open at a back five minutes later and Peltier made light work of his marker before firing past Adams from the edge of the area for a 2-0 Central lead.

Civic were fortunate not to concede another three minutes before the break when a De Silva free-kick rattled the upright.

But it was from a left side De Silva corner on the hour mark that Sampson headed past Adams at first post put Central on a commanding 3-0 lead.

Carlos Edwards made it 4-0 less than ten minutes later when he slid in the area to bury a Peltier cross past Adams, before Marcano completed the five-nil rout by converting from the spot in the 77th minute after former T&T youth player Stephan Campbell was adjudged to have brought down goal-scorer Peltier in the area.

W Connection, in the feature match, broke the deadlock thirty seconds into the second half on the return of the heavenly showers.

Apai swooped in free at the back to turn a Benjamin cross beyond Sando goalkeeper Stefan Berkeley, who had made two first-half stops to deny winger Benjamin and forward Marcus Joseph.

Berkeley also made two excellent saves late to keep out efforts by Benjamin and Apai, but the shot-stopper couldn’t avoid his side’s defeat.

Benjamin had given Connection a 2-0 cushion on the hour mark when he thumped in a low left side Kurt Frederick cross into the back of the Sando net.

Keyon Edwards, one of a few new pre-season additions at Sando, sliced Connection's lead in half with twenty minutes left and moments later another midfield signing Tyrone Charles saw his free kick crash off the bar.

But Benjamin completed his double -- a near carbon copy of his first item -- by pouncing on another left side Frederick cross to score at the goalmouth in the final minute of regular time for the 3-1 Connection finish.

Sando, still in search of their first point and first win this season, will next travel to Civic on Friday June 30 at Mahaica Oval.

On the same day, W Connection and Central will tackle Police FC and Defence Force respectively at the Hasely Crawford Stadium.

Action in the Pro League continues today (Saturday 24 June) at the Larry Gomes Stadium with Police against MIC-IT St. Ann’s Rangers from 4pm and will continue on Tuesday at the Ato Boldon Stadium with Defence Force and Morvant Caledonia United against North East Stars and Jabloteh respectively.