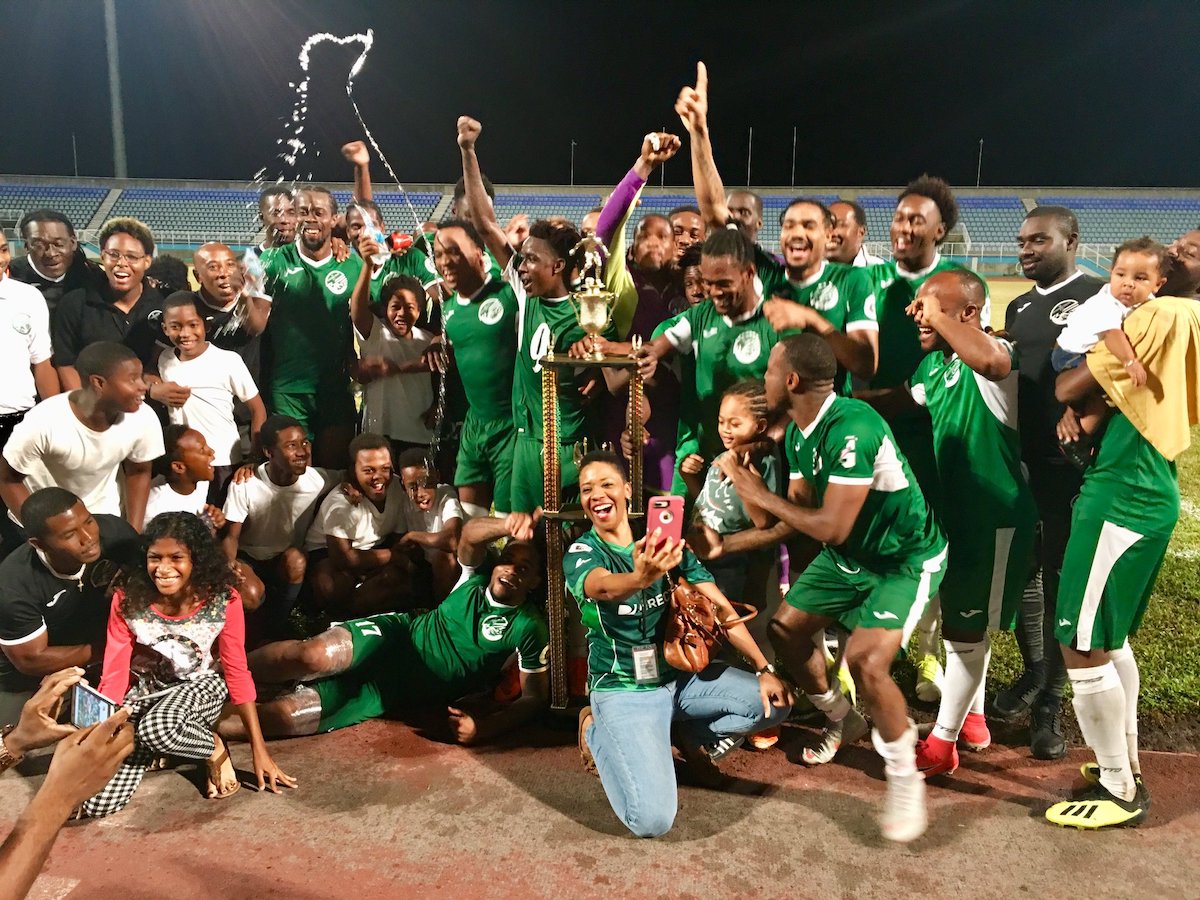 W Connection, led by a hat-trick from Golden Boot winner Marcus “Lobo” Joseph, clinched the Trinidad and Tobago Pro League 2018 crown—an unprecedented sixth league title since the turn of the professional era in 1999—by a point on the final night yesterday with an cool 4-0 victory over table-proppers North East Stars at Ato Boldon Stadium after Couva rivals Central FC had forced Stuart Charles Fevrier’s men into a must-win situation against last season’s champions.

Three-time former PL champions Central (36 points), courtesy an Akim Armstrong strike at the Couva venue, had earlier taken the league lead by two points with a narrow 1-0 win over Police FC, who like Club Sando surrendered their chance at a top-two finish on the final night,.

At the end of the night’s action, however, the Couva Sharks had to settle for runners-up but will join Connection (37 points) at the 2020 CONCACAF Caribbean Club Championship for their credible effort while Sando and Police (both on 33 points and separated by goal-difference) finished third and fourth respectively.

North East Stars, a far cry from the outfit that won the PL last season under then coach Derek King, must improve in player personnel if they are to give a good account of themselves on international debut against the likes of former Caribbean champions Cibao FC and Atlético San Francisco of the Dominican Republic, Portmore United and Waterhouse FC of Jamaica, and Haiti’s Série d’Ouverture winners AS Capoise and Série de Clôture winners. Last night’s performance—their 22nd match without a win from 23 outings in all competitions this season—was a clear reminder of the challenges that await coach Zoran Vranes in the new year.

T&T forward Joseph put Connection ahead from as early as one minute 30 seconds played when he scored from the tightest of angles to beat North East Stars goalkeeper Javon Sample before Neil Benjamin Jr. cushioned the Fevrier’s men 2-0 off a Briel Thomas assist in the 13th minute after Jomal Williams and Kadeem Corbin were both denied by the post.

Allister Bernard unscored with the goal at his mercy around the half-hour mark before teammate Lashawn Roberts’ powerful effort three minutes from the half cannoned off the upright as North East Stars’ miserable night dragged on.

Sample made a number of fine saves on either side of the break including keeping out a powerful Alvin Jones free kick then a follow-up effort by the T&T international and two efforts from Jomal Williams separated by the half, however his side fell further behind 11 minutes into the second period when Benjamin turned provider for Joseph to make it 3-0.

Joseph completed his hat-trick in the 65th minute to make it 4-0 and moved ahead of Sando’s Tyrone Charles by one league goal with 18 to capture his second league Golden Boot after the 2013/14 season thanks to the Jomal Williams’ generosity in rolling a pass across the area for the Point Fortin forward to hit his 25th goal of the season in all competitions into a gaping net.

Police brothers Jameel and Kareem Perry both had excellent openings midway through the first half but on both occasions T&T shot-stopper Marvin Phillip was alert to avert danger before Dillon Kirton drilled an effort wide of the Central custodian’s upright as the Couva Sharks looked porous at the back in the opening half.

An ambitious Christon Thomas attempt from 35 yards out sailed just high as the “Lawmen” grew in confidence before Central had their star player and T&T midfielder Duane Muckette limp off injured and was replaced by Xavier Rajpaul four minutes from the half.

Armstrong however punished Richard Hood’s side in the 68th minute following a mix-up by a defender and goalkeeper Adrian Foncette by poking the eventual winner into the net, at which time his former employers Sando were trailing a two-nil score against his ex-club Morvant Caledonia United at the Hasely Crawford Stadium.

Keron “Ball Pest” Cummings had put the “Eastern Stallions” in front six minutes from the half and Guyana international Sheldon Holder doubled the advantage in the 59th minute before completing his double and the 3-0 win in the 90th minute to dash Sando’s hopes of a top-two finish.

Later at the Port of Spain venue San Juan Jabloteh signed off with a 5-0 win over Terminix St. Ann’s Rangers with veteran attacker and multiple-time former league winner Jason Marcano scoring a hat-trick while Josiah Baird and Tyrese Baily each had a goal.