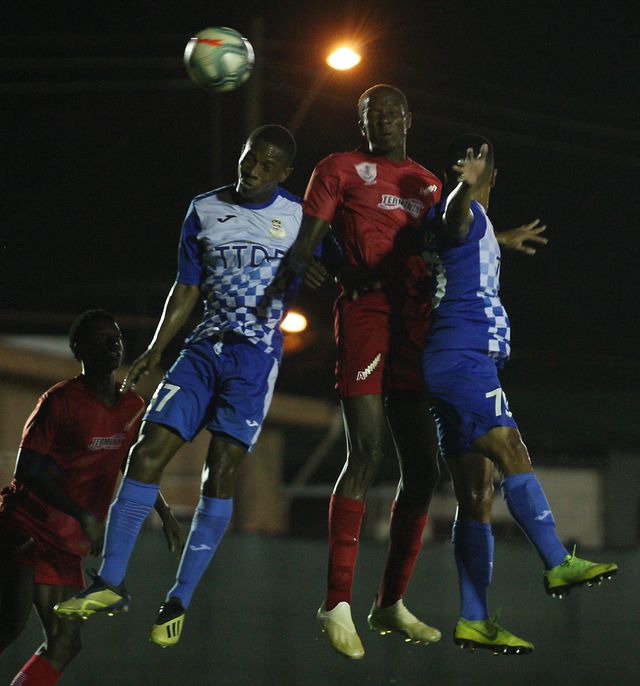 The "Teteron Men" al­so went in­to the match on the heels off 3-0 road win at Pt Fortin Civic while Rangers, who are on their hunt for their maid­en Pro League crown and were 8-1 vic­tors against cel­lar-placed Cunu­pia FC.

How­ev­er, Rangers who have net­ted 33 goals in ten match­es so far this sea­son failed to cap­i­talise on their man ad­van­tage as both teams went in­to the half-time in­ter­val locked at 0-0.

Nine min­utes in­to the sec­ond-half, De­fence Force took a sur­prise lead through Hashim Ar­cia with his third goal of the cam­paign, and two min­utes from the full-time whis­tle, Re­on Moore sealed all three points for the vis­i­tors to move to 26 points from 11 match­es, sev­en ahead of Rangers.

The duo of Shaq­keem Joseph (17th) and Kevon Williams (45th) were both on tar­get in the first-half for Club San­do to lead 2-0 at the half be­fore Keron Corn­wall added a sec­ond-half brace (76th & 81st) fol­lowed by a 90th item by Luke Charles.

The result saw the Army/Coast Guard combination surge seven points clear at the top of the 11-team standings as they hunt their fourth Pro League championship title. If successful, the ‘Teteron Boys’ will pull alongside San Juan Jabloteh as the Pro League’s second most successful football team. W Connection rule the roost with six titles.

Rangers are in second place at present.

The win propelled Sando three places up the standings to seventh while Jabloteh stay fifth. And, in today’s lone match, ninth placed AC Port of Spain and tenth placed Central FC played to a 1-1 draw at the Ato Boldon Stadium.

The fixture between fourth placed Morvant Caledonia and sixth placed W Connection, scheduled for Couva this evening, was postponed.

Morvant Caledonia, who trail Defence Force by nine points, have four wins, five draws and a solitary defeat from their 10 outings and often lacked the offensive punch necessary to put away opponents and match pace with the league leaders.

Their tame challenge leaves Defence Force sniffing history. The Teteron Boys were the Pro League’s first champions as they claimed the inaugural crown in 1999. And, quite possibly, they might be the last.

Should the various parties find consensus and funding, it would signal a seismic shift in the structure of the local game with the devil in the details—as far as what is at stake for clubs and, by extension, their players.

For the 2019/20 season, the ‘Demon’ has been between the uprights for the Defence Force. And, not for the first time, Rangers could not manage a successful exorcism.

On the last occasion that the two teams met in La Horquetta, Enill saved a penalty from Rangers forward Tyrone Charles in a goalless draw—en route to Defence Force lifting the first Ascension title.

Last night, Enill haunted the hosts again with another penalty save as coach Lloyd Andrews’ troops pulled off a 2-0 win in an electric affair. And this time, they only needed 10 players to stop Rangers.

The match was just 19 minutes old when defender Curtis ‘Boyo’ Gonzales, the Ascension Invitation MVP, needlessly barged into opposing flanker Kishun Seecharan. Referee Kwinsi Williams had already whistled for a foul by Seecharan on Defence Force stopper Rodell Elcock when Gonzales flew on with elbow raised and the official felt obliged to show the red card.

The visitors started with a 3-5-2 formation with Gonzales operating as sweeper, to negate Rangers’ dangerous counter attacking ploy. Andrews and assistant coach Hutson ‘Barber’ Charles opted to shuffle their starting team rather than turn to the bench, as midfielder Aaron Lester dropped into defence while attacker Adrian Welch joined playmaker Hashim Arcia in midfield.

Rangers were the better team for the rest of the first half but could not find a way past Enill. The goalkeeper fended away a stinging right footer from opposing captain Jamal Creighton in the the 25th minute before he came up with yet another save from the spot.

The penalty call itself was debatable. Defence Force left wing back Jelani Felix missed a deep cross from Ross Russell Jr and his back was turned when Seecharan headed the ball against his arm.

Williams was deaf to the ‘Army’ protests. But Enill dove to his left to keep out a low effort by Rangers defender Jevon Morris while Charles hit the rebound overbar.

And the first half ended in frenetic style, as Army forward Brent Sam blasted against the Rangers upright from an improbable angle in the 44th minute while, seconds later, Enill made arguably his best save of the night to deny opposing forward Isaiah Lee from 18 yards.

Up in the stands, National Senior Team head coach Terry Fenwick and his assistant Derek King might have been thinking that there is life in the local top flight competition after all.

In all four of Rangers’ lopsided home wins, they scored within the opening five minutes before ripping AC, Jabloteh, Point Fortin Civic and Cunupia to shreds on the counter as they tried to get back into the game.

After 17 competitive matches in La Horquetta across the Ascension and Pro League competitions, Rangers failed to be ahead by the halftime interval on just six occasions. In all six instances, they failed to win at all—as they lost once each to Morvant Caledonia, Police and Defence Force and drew against Club Sando (twice) and Army.

Eight minutes into the second half, Quamina’s entertainers fell behind as defender Jesus Perez and goalkeeper Jabari St Hillaire both failed to clear their lines and Arcia pounced to drive the ball into an unprotected net.

Seecharan almost conjured up an equaliser, midway through the second half, with a venomous left footer from distance that Enill tipped overbar. But Defence Force looked comfortable enough once ahead and doubled their lead in the 88th minute, after another farcical moment at the back by the host team.

On this occasion, Russell and St Hillaire failed to deal with a straightforward, long diagonal ball and substitute Reon Moore got on the end of it for another simple finish.

At the final whistle, Defence Force players held up the jersey of teammate Jules Lee who suffered a broken leg in training on Monday. It was a thoughtful gesture that hinted at the camaraderie within their camp.

It is the Demon in the gloves that would give the Rangers players sleepless nights, though.