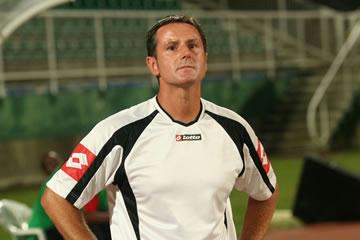 Jabloteh needed a late winner from team captain Marvin Oliver to see off Inter 2-1 at Marabella on Monday-although the visitors played most of the game with ten players-and cannot afford to take progress for granted.

However, Jabloteh CEO Azaad Khan admitted that Fenwick, who led the San Juan club to three T&T Pro League titles in five full seasons including back-to-back crowns in 2007 and 2008, is unpaid since the start of the year and has been carrying out his duties without recompense for the past three months.

Fenwick, a former England World Cup player, is contracted to Jabloteh for another two years, but Khan said, since the financial woes of chief sponsor CLICO, the club's attempt to get a sponsor to pick up their coach's wages have been unsuccessful.

He described Fenwick's salary as "considerable".

"The contract was paid by CLICO before, even though (Fenwick) is contracted by Jabloteh," said Khan. "But that figure is now beyond them."

Jabloteh chairman Jerry Hosepedales said Fenwick's predicament was down to CLICO's collapse rather than the failure of his club's board and insisted they were still looking for sponsors to meet the salary of the head coach, as well as their women's football team and netball programmes.

"I thought CLICO used to pay him," said Hospedales, when asked if the club met their obligations to Fenwick. "Our first responsibility is to the players CLICO is under the control of the government (now) and have decided to fund us at a very low level. But they won't fund Terry's contract."

Fenwick refused comment on his position with Jabloteh and would not confirm whether he refused to travel to Suriname for their next fixture. However, team manager Wesley Webb, captain Marvin Oliver and senior player Earl Jean confirmed that Fenwick would not lead the team in battle against Inter.

Khan told the Express that Jean, who was recruited by Fenwick from W Connection last season and was a substitute in the CFU first leg on Easter Monday, would handle coaching duties in Suriname as Jabloteh's assistant coach last year, Angus Eve, moved to Ma Pau in the close season.

"Earl Jean is in charge for the short term," said Khan. "When we come back, we will decide what is going on, but people will be surprised at how strong we will end up being. We have a solid structure at this club."

The 37-year-old Jean, one of St Lucia's most celebrated ex-international players, is not certified as a coach although he has a wealth of experience from nearly two decades as a professional in Portugal, England, Scotland and Trinidad and Tobago.

Jean revealed that Fenwick prepared him in advance for his possible departure.

"He let me know what was going on and prepared me to take on the mantle," said Jean. "I am trying to get the players focused and we are hoping that everything is resolved and he will be back with us by next week. We understand what Terry is going through and we all feel for him.

"It is a big loss because he has run a very good programme in Jabloteh for many years and won many trophies. We all have to pull together because we don't want to be out of the (CFU) tournament and we want to show CLICO that we are a good bunch of players and all the money they put into the club over the years has not gone to waste.

"We are going to do everything we can to make CLICO proud to still be associated with Jabloteh."

And there was some good news at the Jabloteh training ground yesterday as the players were finally paid their salaries for last month and received assurances from Khan that the club's financial woes have been sorted out.

The goodwill between administration and players did not seem to extend to Fenwick.

The defending Pro League champions may now have to defend their League, Toyota Classic and Big Six titles without English boss Terry Fenwick too after the coach, a former Pro League Coach of the Year, pulled out of Jabloteh's trip to Suriname for a second leg Caribbean Club Champions Cup fixture against Inter Moengotapoe. Jabloteh won the first leg 2-1 at the Mannie Ramjohn Stadium, Marabella on Monday.

Marvin Oliver, the new team captain, is anxious for a successful season despite the precarious position of their head coach who has not been paid since CLICO's financial collapse in January.

"The lads are down but everybody is pulling together and trying to think about the club," said the 33-year-old Oliver, who scored the winner in the first leg. "(Fenwick) laid a foundation within the team so we will continue to play the same way and keep the same system. Hopefully, he is just missing for one game and not the season."

Team manager Wesley Webb offered support for Fenwick too but insisted that Jabloteh will do everything possible to build on their success despite the setbacks.

"Top praises to Terry who has been working under immense pressure," said Webb.

"He has stuck it out for month upon month which shows his level of professionalism. He came this morning and gave all the necessary information we need for the Suriname trip and gave the mantle to Earl (Jean) and we did a pretty good job.

"Everyone has been working feverishly from directors and the CEO to us on the ground to try and keep things afloat. It is like a rug has been pulled from under us but, in adversity, we have to bunch a bit closer together."

Earl Jean, who was recruited by Fenwick last season, also paid homage to the head coach and expressed hope that he be kept on. But Jean, like Oliver and Webb, insisted that they were grateful for CLICO's continued support and the team would do everything possible to satisfy their sponsor.

"We all have to pull together because we don't want to be out of the (CFU) tournament," said Jean, "and we want to show CLICO that we are a good bunch of players and all the money they put into the club over the years has not gone to waste.

"We are going to do everything we can to make CLICO proud to still be associated with Jabloteh. But we hope that everything can be resolved with our coach."

Lester Peltier moved to Belgium on loan this month and could possibly return later this season. But there is no chance of seeing Trent Noel, Cyd Gray, Nigel Daniel, Daurance Williams or Beville Joseph in a Jabloteh shirt this season.

Who are weighing their options:

Jabloteh seem happy enough to have Terry Fenwick fulfil his duties as head coach but the Englishman will not carry on indefinitely without a salary. Jabloteh did offer terms to 2006 World Cup player Cornell Glen but he is supposedly tempted by a better offer from United Petrotrin and might join Noel there while defender Joel Russell and national under-20 midfielder Kevin Molino are rumoured to want out.