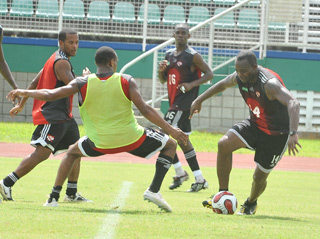 A 20-man squad has been called up to join National Men’s Senior team training for the upcoming friendly international against Finland’s Senior team at the Hasely Crawford Stadium on January 22nd.

The team includes several Olympic team players as well as some from the senior team which participated in the early phase of the 2014 World Cup campaign last year.

Senior Team assistant coach Hutson Charles will be partnered by Olympic team head coach Angus Eve to oversee the national outfit for this encounter. They will be part of an interim staff that has been set up for this particular match.

With the T&T Under 23 team preparing for the CONCACAF final round in March, the opportunity has been taken to include some of the team’s members for this encounter against the Europeans with the likes of Sean De Silva who already a senior international appearance and Joevin Jones who also made his debut under ex-coach Russell Latapy, Aquil Selby, Aubrey David, Leslie Russell and Jean-Luc Rochford  being included.

Charles said the emphasis would be on exposing some of the younger faces to international opposition at this stage.

“It’s a rebuilding process for our senior national team and what we are trying to do particularly from this match coming up is to expose some of the Olympic team players along with the other players who are likely to be around for the other World Cup campaign to follow,” Charles told TTFF Media.

“We want to blend these players together including some of the other guys who have been knocking on the door in the Pro League.

While this game is part of the rebuilding process we definitely will not take a positive result for granted but we are also asking the fans to be a bit patient even though we know there will be some disappointment around still following our exit from the 2014 campaign.

But of course the team will be prepared with future campaigns and tournaments in mind. There is the Caribbean Cup and the next Gold Cup to look ahead to already and therefore we’ll be trying to groom our players from this match into the remainder of the year,” Charles added.

The team will train on the 18th and 19th from 9am at the Ato Boldon Stadium. The match on January 22 kicks off at 5pm at the Hasely Crawford Stadium. The T&T Olympic team will also face Finland at the Dwight Yorke Stadium three days later.