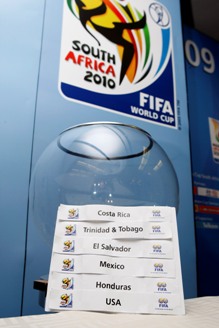 The match schedule for the final six-team 'hexagonal' round in the North, Central America and the Caribbean Zone - with three and a half spots at the 2010 FIFA World Cup South Africa™ on the line - was established at an Official Draw in Johannesburg, South Africa on Saturday 22 November 2008.

Taking pride of place among the region's other exciting clashes are the two meetings between CONCACAF champions USA, who will play at next year's FIFA Confederations Cup in South Africa, and rivals Mexico, who only managed to sneak into the final qualifying section after picking up one point from their last three games, including losses to Jamaica and Honduras.

The first instalment of the trans-Rio Grande clasico will take place in the US on Wednesday 11 February, while the return leg in Mexico will be staged on Wednesday 12 August.

Four other New World participants will also be in the battle for the region's three and a half spots at South Africa 2010. Trinidad and Tobago, who became the smallest nation to qualify for a FIFA World Cup when they reached their first finals at Germany 2006, will be hoping to repeat the feat, while Costa Rica - who won all six of their semi-final round matches - will be keen to make it to their fourth world showpiece. Honduras and El Salvador, for their part, have not reached finals since they both lined up at Spain 1982 and will be raring to put themselves in the field for the first FIFA World Cup on African soil.

The top three finishers from the final 'hexagonal' round will qualify automatically for South Africa 2010 as the region's representatives, while the fourth-place team will contest an intercontinental play-off with the fifth-place finisher from the South American Zone over two legs. The winner will also go to South Africa.