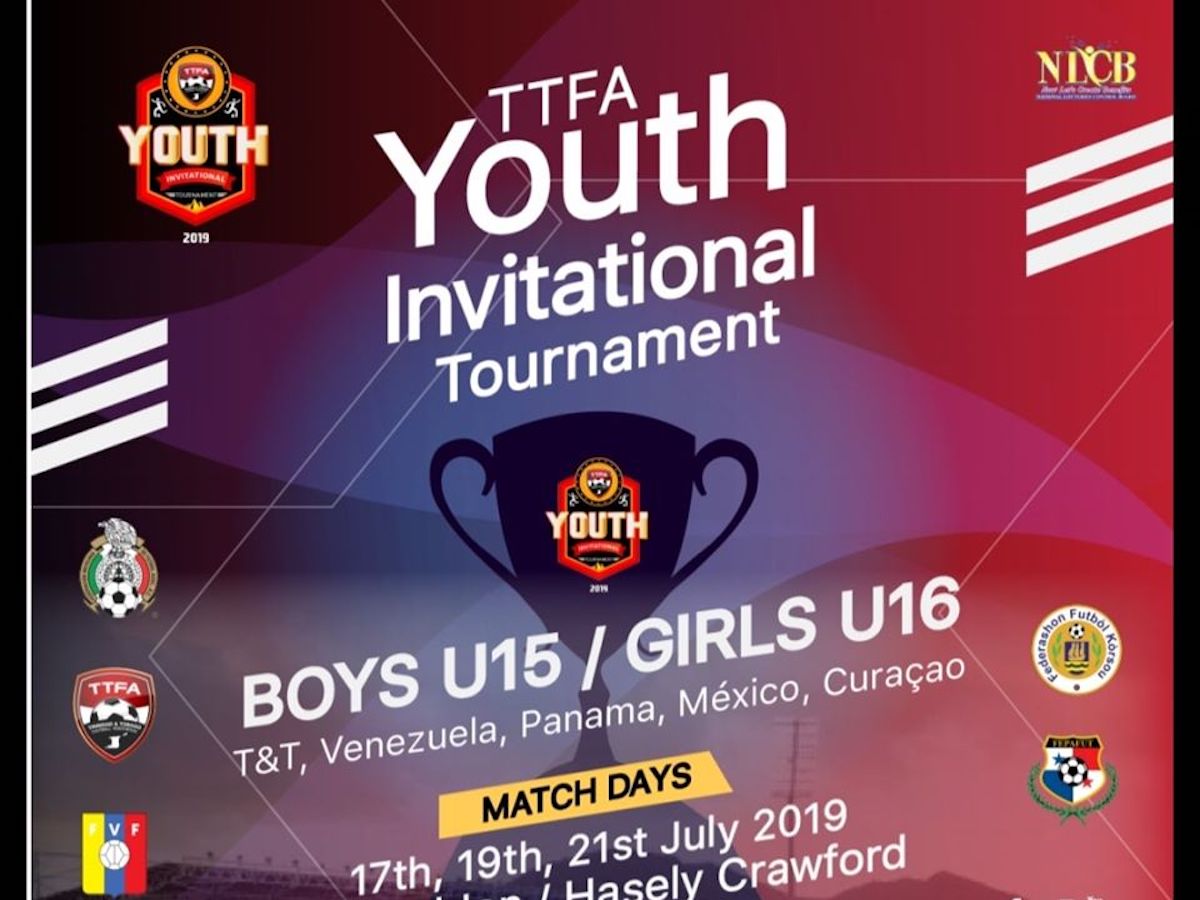 Trinidad and Tobago’s Under 15 Boys team will face off with Panama’s U15s in the second game of a double header on the opening day of the TTFA 5-nation Invitational Youth tournament on July 17th at the Ato Boldon Stadium in Couva.

The TTFA announced fixtures for the event which will also see the National Girls under 16 team getting much needed match practice against Curaçao's U-16 girls on the second and third match days.

T&T will open against Panama on July 17th from 7:15pm with Mexico and Panama squaring off in the curtain raiser from 5:15pm.

There will be a triple header at the Hasely Crawford Stadium on Friday July 19th with T&T’s girls taking on Curacao from 4pm, Mexico and Panama’s boys meeting at 6:15pm and T&T taking on Venezuela from 8:15pm.

The final day will see T&T facing Mexico in the third game of the evening at the Ato Boldon Stadium from 7:15pm

“It’s very good preparations for us,” T&T U-15 boys head coach Stuart Charles Fevrier told TTFA Media. “Like I said before, it’s important to see where the boys are at this point in terms of match readiness and we need to be playing against quality opposition such as Mexico, Venezuela, Panama and Curacao. I’m really pleased that the Association has been able to arrange these matches for us,” he continued.

“We have two weeks left before the opening game and we’ll be working towards ensuring that the team gives a good account in front of the home fans,” Fevrier added.

T&T is preparing for the 2019 CONCACAF U-15 Boys Championship at IMG Academy in Florida in August where they will face Mexico, Panama and Curacao.

The Women Under 16 team meantime is preparing under head coach Stephan De Four for the Concacaf 2020 Under 17 Women’s Championship at IMG Academy.

“Preparations are now really starting and I’m focusing on some aspects such as getting the players together because we have those playing in the WOLF League and other small leagues in the country.I’ve also been to Tobago to see a few players,” De Four told TTFA Media.

“The opportunity for us to play two games against Curacao in this tournament is good and much welcomed at this stage because it’s whole new start for the programme. We have five overseas players coming into the squad. We’re not quite there as yet in terms of preparations but we are getting there and these games will be useful for us,” De Four added.

Tickets are available at all NLCB Lotto outlets. They are priced at $50 (covered), $30 (uncovered) per matchday and $125 for a season pass which allows access to all three match days in the covered stands.

Charles-Fevrier has high hopes for U-15 Invitational.
By Joel Bailey (Newsday).

NATIONAL Under-15 men’s football team coach Stuart Charles-Fevrier believes the TTFA (TT Football Association) U-15 Boys Invitational four-nation tournament in July will prove to be a much anticipated and worthy exercise for the team ahead of the 2019 Concacaf Boys U-15 Championship.

Charles-Fevrier has been overseeing the team for just over three years and his backroom staff has been continuing the preparations of the team at the TTFA Home of Football in Couva.

“It is a tournament I really welcome,” said Charles-Fevrier. “These boys have been working for some time and I believe now they need more exposure playing more Central American and North American teams because we’ve only played against Caribbean teams in the last competition in Curacao.”

Concacaf giants Mexico and Panama along with Venezuela, have all agreed to participate in the round-robin tournament which be hosted in Trinidad.

“I am very happy for the opportunity they will be getting to play against Mexico which is a top footballing nation, Panama and also Venezuela which has improved tremendously in world football,” said Charles-Fevrier, the current T&T men’s assistant team coach.

“We are still at a developmental phase. The Concacaf championship in August is a developmental one and I understand that one of the rules says that every player must play at least 60 minutes. Our programme has always been twofold – one to win football games and secondly to develop the players for the future of TT football.

“I’m always excited whenever the boys play whether at home or abroad. This will be the first time they will be playing at home where the public will get the chance to have a look at them and I know the players will be looking forward to it as well,” Charles-Fevrier added.

T&T have been grouped with Panama, Mexico and Curacao for the group stage of the Concacaf championship at IMG Academy in Bradenton, Florida, United States from August 4-12. “Panama and Mexico are in our group and playing them in the competition at home will give all the teams a good opportunity to have a look at each other.

“By the time the Concacaf Championship comes around we would have played against four very good opponents in the preparations,” Charles-Fevrier said.