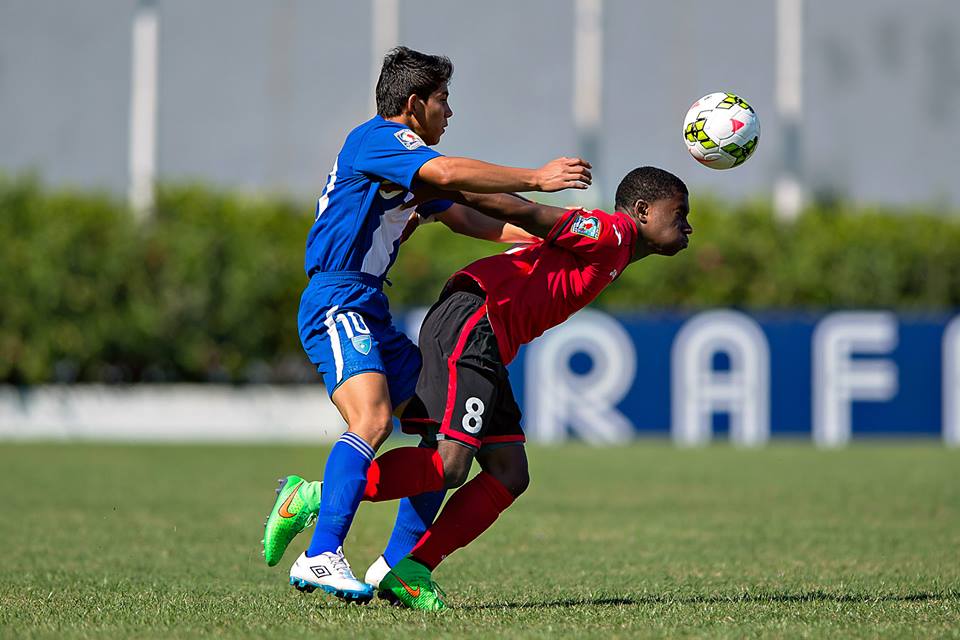 Diego Raymundo struck for two goals and Guatemala defeated 10-man Trinidad & Tobago 4-1 in the opening match of the 2015 CONCACAF Under-17 Championship (CU17) on Friday at the Estadio Francisco Morazan.

The result gave the Guatemalans an early advantage in Group A with USA-Cuba and Honduras-Jamaica set to close out the tripleheader later in the day.

It was an offensive explosion from a side that was shutout four times in its last five matches in the competition.  In fact, the output ranked as Guatemala’s best ever in a CU17 game.

The Central Americans were able to capitalize on some uncertainty in the Trinidadian defense and, as a result, went ahead in just the second minute. David Ramos delivered a corner kick from the right side that found the head of Fernando Fuentes. The Trinidadians could not react quickly enough to clear and with three teammates prepared to score, Raymundo was first to jab the ball home.

Seven minutes later, Guatemala took advantage of another defensive miscue to double its lead.  Victor Valdez lofted a right-sided free kick into the box with his left foot. The ball bounced in front of goalkeeper Levi Fernandez, who appeared to think that it would be headed away, and into the back of the net.

In the 39th minute, the Caribbean side was reduced a player, when Shirwin Noel was shown a straight red card for a high foot into the chest Stefan Behrens.

Despite being down a player, Trinidad responded in a positive fashion, getting on the scoreboard through a brilliant individual effort by Keston Julien in the 45th minute. The 16-year-old defender burst into the left side of the Guatemalan box, weaving his way through the defense, before drilling a left-footed shot into the far-side netting from eight-yards out.

Trinidadian joy was short-lived, however, as Abel Lemus restored Guatemala’s two-goal lead in the second minute of stoppage time.  The Municipal youth standout intercepted an errant pass and raced down the middle into the box, before chipping from 12 yards beyond Fernandez’s reach.

Both teams emerged from the break in attacking moods, but – thanks to some good fortune -- Guatemala got the goal that provided the margin of difference in the 54th minute.  Fernandez came far out of the box to make a clearance on a high, hopeful ball down the middle, but was not successful.  Raymundo got in between two defenders to gain possession and beat Tekay Hoyce to tally from close range.

Trinidad nearly halved the deficit in the 76th minute, only for Hoyce to head off the left post after Noah Powder’s corner kick went through the hands of goalkeeper Gilder Lemus.

Guatemala returns to action on Monday against Jamaica, while Trinidad will look to bounce when it takes on the United States.

NOTES: Guatemala was the last team to qualify for the competition after prevailing over El Salvador in a two-legged playoff, 2-1 on aggregate.