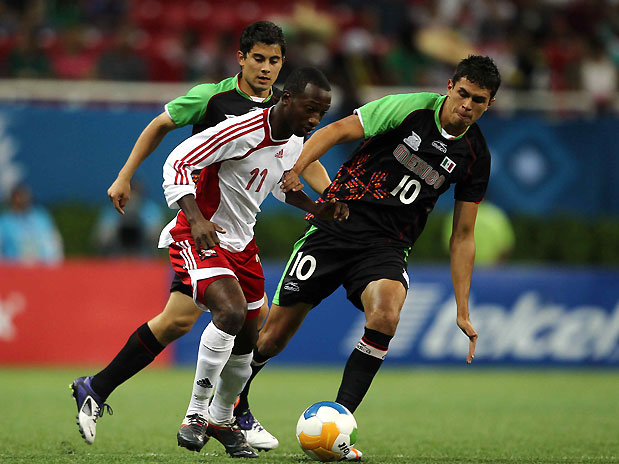 The Trinidad and Tobago Under 22 men’s team returned home from their satisfactory showing at the 2011 Pan American Games in Guadalajara on Saturday.

But three players stayed back in Mexico after being invited for a five-day trial with Mexican Primera Division club Pachuca FC, following their promising performances that caught the eyes of the club officials during the matches against Mexico, Ecuador and Uruguay.

Senior team midfielder Kevin Molino, winger Micah Lewis and midfielder Jayson Joseph are scheduled to return to Port of Spain on Thursday following their trial at the club.

Molino is currently attached to US club Orlando City while Lewis is at Caledonia AIA and Joseph is a member of W Connection.

“After the three games we got the invitation to go to Pachuca for a few days. I was particularly happy for the boys like Jayson and Micah to get the opportunity because I think this invitation showed that we attracted some attention during the tournament.

The effort was really good and I would have loved if more players had the opportunity to go to a club or two.

But I think once continue putting in the work and performing well then more opportunities will come for the boys,” Molino told TTFF Media. He added that Orlando was aware of his extra stay at Pachuca.

"Now the club will get back to us. We completed our training and the coaches had a look at us and they have said they will give us an update."

Over the past decade, Pachuca has been rated as the most successful club in Mexico, winning five national championships, four CONCACAF Champions’ Cups, a Superliga and one Copa Sudamericana.

The club has had several Mexican national players over the years including ex-striker Jared Borgetti as well as former Costa Rican stars Hernan Medford and Rolando Fonseca as well as striker Christian Dionisio who has eleven caps for Brazil and was part of their 1999 Copa America winning team.

The former Mucurapo Senior Comprehensive player will now link up with the T&T Senior team for training ahead of the crucial 2014 World Cup qualifier against Guyana on November 11.

“This is very, very important game for us. I think we all know how much we need to go there and take care of business.

I don’t expect the game will be easy in any way but we must be ready to give it everything and bring home a result and then finish it off in the last game here in Trinidad,” the 21-year-old added.