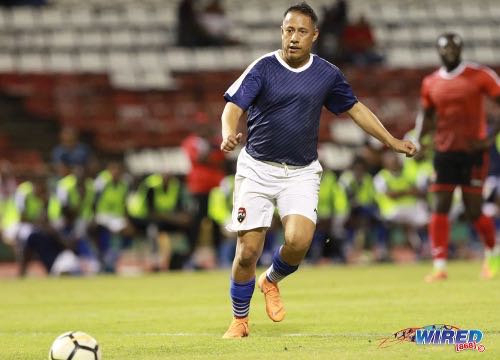 Commissioner of Police Gary Griffith said he is waiting on answers to points raised in his press statement this evening before deciding on the fate of the 2020 Commissioner’s Cup.

The Commissioner’s Cup football tournament caters to over 2,000 children nationwide who are divided into under-14, under-16 and under-18 categories and was initially due to kick off in early August.

However, the competition was thrown into doubt after repeated advisories by Chief Medical Officer Dr Roshan Parasram and Minister of Health Terrence Deyalsingh that all children’s activities should be delayed until September, due to concerns about Covid-19 infections.

“I am still waiting for clarification because the government is telling me I should proceed but the CMO is hinting that I shouldn’t,” Griffith told Wired868. “The attorney general and the minister of national security have given me a thumbs up to continue but the CMO is saying otherwise. So I have raised a couple questions in my press release and I am waiting to get an answer.”

Incidentally, the Trinidad and Tobago Police Service (TTPS) was visited by a representative from the CMO’s office today. Dr Parasram did not attend the meeting and, this morning, Deyalsingh made it clear that Griffith’s comments about him and his CMO had not gone unnoticed.

“All the advice we have given about children, which has not gone down well in some quarters,” said Deyalsingh. “[…] Both the CMO and I have been under the gun about the measures we are taking to protect children…”

Despite his continuing questions on the issue of sport competitions for minors, Griffith also chose not to attend the meeting with the CMO’s representative. He declined to answer whether he snubbed talks because he was informed that Dr Parasram would not be there.

Griffith did say that the CMO’s representative stuck the line of the Ministry of Health’s bigwigs, which was: ‘it is not against the law but we do not advise it’.

The commissioner of police still does not view that as a satisfactory answer. He pointed to fact that some school and youth teams stopped training because of the CMO’s advice while some continued on the grounds that the government’s public health ordinance made it okay to do so.

“They are confusing the life out of everyone,” he said.

So will the Commissioner’s Cup be stopped?

Griffith said he has no problem calling off the tournament—but first he wants some clarification.

“We will adhere to the medical health guidance, don’t get me wrong,” said Griffith. “But my point is there are mixed messages. You cannot say it is improper for an organised tournament but not for hundreds of children to go to Maracas Bay, or to a waterpark, or to sweat at the Queen’s Park Savannah or to a movie within a closed environment. That makes no sense.

“How is an organised football game a higher risk factor than hundreds of children at Maracas Bay?”

Commissioner of Police Gary Griffith and Chief Medical Officer Dr Roshan Parasram confirmed that representatives from both organisations will meet this week to discuss children’s sports over the July/August period.

At present, there are no Covid-19 health regulations that forbid sport at any age group and Griffith is keen to hold the Commissioner’s Cup next month—a football tournament that features over 2,000 children competing in the Under-14, Under-16 and Under-18 categories.

However, Dr Parasram has repeatedly advised against any children’s activities before September. This morning, the CMO repeated his concerns, in the wake of a suspected case of local spread of the virus.

“There is no regulation as it relates to sporting activities,” said Dr Parasram, “however as we have said before, the medical advice remains—and more-so with this last case we have gotten with no link to importation.

“There remains a concern for children and we are asking parents to do all that is necessary to protect your children at this time and take personal responsibility for their wellbeing. So we are asking that all child related actives be held until September, aside from the SEA and other examinations that are taking place.”

Minister of Health Terrence Deyalsingh addressed the issue of team sport later but specified that he was referring to adult sport.

It would suggest that senior domestic football competition, the Ascension Tournament, scheduled to kick off on 14 August, should be fine to proceed. But the Commissioner’s Cup may not have the blessings of the CMO.

However, Griffith hopes to convince the CMO to soften his stance before the end of the week—although Dr Parasram’s concerns do not carry any legal force.

Griffith repeated his own view that organised sport remains than one of the healthiest things the country’s young men and women can do over the July/August holiday period.

“[The Commissioner’s Cup] will be one of the safest places for young people to be in comparison to being in a cinema or waterpark,” Griffith told Wired868. “I have spoken to the ministers of health and national security and there is absolutely nothing they have stated that says it is not to take place.

“The reason why I have been so vocal on this is because sport plays an integral part to keep young children away from crime and to keep them healthy.”

Griffith pointed to policies that will be in place for the Commissioner’s Cup such as the banning of spectators, huddling and snacks while there will be temperature checks for players and teams must leave match venues immediately after their games.

If the Commissioner’s Cup gets the green light from the CMO, it is likely to set a precedent for other youth sporting activities which can put similar safeguards in place.

CoP to Deyalsingh: ‘Include me in covid19 talks'
By Narissa Fraser (Newsday).

COMMISSIONER of Police Gary Griffith says he has been trying to contact Health Minister Terrence Deyalsingh for days, describing some of the ministry's actions as “hypocrisy.”

He was speaking at a media briefing on Monday morning.

He said the police are there to enforce laws, so he should at least be included "at the forefront" of discussions surrounding the covid19 pandemic.

But Griffith had responded that children were congregating for other things, such as beach visits. He said some people seemed to have misunderstood the point he was trying to make.

“If it is you just give us a briefing to say, ‘Do not have a sporting tournament,’ but you could allow persons to play 20-a-side small goal in an enclosed environment in Nelson Mandela Park and nothing is done – that is not democracy, that is hypocrisy.”

In a release last Wedensday, the CoP criticised the CMO's advice that youth sports should be postponed until school restarts in September. Griffith said young people would be frustrated after being shut up at home under lockdown, and said there was no law against their playing sports once the maximum numbers permitted under the Public Health Ordiannce were observed.

Griffith added on Monday,, “I heard the Minister of Health speak today and he said, ‘Communication is the key.’

"It’s very interesting the Minister of Health stated this, because a few days now I’ve asked him to contact me and he said he is busy.

However, he said, "Rather than persons trying to make things personal, I would ask the Minister of Health to take his own advice and use communication as a key to ensure whatever (steps) they recommend, the police service can adhere to them and assist.”