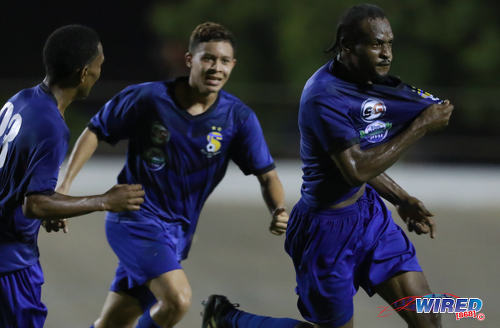 Providing his executive is given the all-clear by the Ministry of Health concerning health protocols being implemented and adhere too, Clayton Morris, the recently elected T&T Super League (T&TSL) president is targeting a June 2021 start.

Due to the coronavirus (COVID-19) pandemic and a legal issues between the executive of the T&T Football Association (TTFA) and the world governing body for the sport FIFA, no football was played during the 2020 season.

However, having replaced FC Santa Rosa owner, Keith Look Loy as president of the T&TSL after a hotly contested election late last year, Morris, the current coach of University of T&T (UTT) said looking ahead to 2021, a lot of the players are out there and they are just raring to go.

Morris, captain of the infamous 1989 “Strike Squad” national team which came within a point of qualifying to the 1990 Italy World Cup said from the meeting he had with his executive the immediate goal or plan was to get in touch with all the clubs.

Speaking to Guardian Media Sports on Wednesday, he said, “I called via telephone the respective clubs, the membership I should say and I got in touch with 18 of them from the 22nd to the 28th.

“I made those calls to get that feeling from me as the president to the general membership because you all know there was a lot of infighting going on concerning the body (TTSL) and as of everything else when I was given the responsibility I remember even going back to my days on the national team and even when given the responsibility to coach a national team I wanted every member to feel a part of the organization and this is the same thing.

He added, “I touched base with the 18 members of the respective Super League clubs and we basically want to wish them a Merry Christmas and that they all have a safe covid-free season.

Asked what he wished for from the clubs, a humble Morris he hoped that they can work together to make the Super League better than it is now and that they can take T&T football to the heights that it suppose to be.

“Also we want to continue to provide that platform for the players to continue deterring them from a life of crime.

Asked if the way forward for the Super League and his conversations over the Christmas Holidays included the suspended clubs, Morris, said, “If you check the membership you will see that its 21 clubs and 18 from that 21 I was able to contact.

In terms of the smooth running of the T&TSL after a somewhat turbulent end to 2020 mainly because of the hotly contested elections, Morris said he wants to bring back the love to the game.

“When I came into the position I stepped into the role with a sort of confidence that the members feel that’s its something new and they want to invest in.

Describing his approach to doing things openly and taking his executive views seriously, Morris noted that he got a courtesy call on the December 21 from Robert Hadad, the Normalisation Committee chairman for a meeting on that day.

“It (the meeting) lasted about 15 minutes and it was basically and he (Hadad) sharing his idea about having a T&T Football League.

He said, it’s not the real name of the league, but he will call it that for now, and I think that is replacing the T-League that the past administration was trying to bring on board.

"So proceeding that meeting I will give him an answer on what is the Super League take on it, basically he wants to know what we feel about the league and what contribution we can make.

Asked what his thoughts were on a merged national football league, Morris replied, “Well I told him I was all excited about something like that, but again I couldn’t make the decision but coming out of the board meeting one of the members asked what is the structure and to be honest Mr Hadad didn’t give any structure, he outlined the sponsors, and what they expect from the league.

So coming out of the board meeting, one of the members said yes we support the idea, but we need to have the structure so that we can have something to take back to the membership so that we can give our full take and support on it if so.

Asked if he was confident that the idea of the league will not fall by the wayside as that of previous administrators who tried unsuccessfully to merge the T&T Pro League and T&T Super League despite the assistant of Uefa, Concacaf and Fifa officials making a grand effort to assist with its formation, by getting rid of the established Pro League Morris said: “From my understanding, the league will be two tiers, with the Pro League making up the first tier and the Super League, the second tier, so I don’t understand why one would think they are throwing out the Pro League.

"As Hadad said, there will be relegation and promotion and what he said the Pro teams will be making up the bulk of the tier one and the Super League the tier two, and it's still optional for the clubs in the Super League if they want the promotion to go up to the Pro League.

Concerning how soon the season will get going Morris said one of his three objectives was that to get back out on the field of play.

“What I was told is that we have to put a proposal in place to the Ministry of Health and in turn, they will give the policy towards resuming training.

"So that is one of my main objectives to get back out on the field and play pre-competition and in-competition.

Because the Super League normally starts June so despite the T&T League as Hadad calls it scheduled to start in March we are preparing to have the normal Super League kick-off in June.

"But as I said, we have to put this proposal in place to the Ministry of Health so that we can be guided accordingly.

With regards to trying to amend some of the requirements by the Ministry of Health needed to have the league as some other sporting bodies are doing to jump-start their season, Morris noted that coming out of our board meeting one of our members from Tobago outlined that there is a stipulated form that the Ministry of Health has and he has access to it.

So he took the responsibility to fill it out and then we will take it from there, " stated Morris.

Clayton Morris has wasted little time getting down to business as the new president of the Trinidad and Tobago Super League (TTSL) and has already taken steps to address the re-starting of the League in 2021 and getting all clubs compliant.

Morris was elected TTSL president last month following a protracted Annual General Meeting held over two weekends after it was abruptly ended on the first occasion by then acting president Jameson Rigues.

That same month, Morris issued an eight-point plan for the TTSL, and he has already addressed two of the first three items—having individual meetings via telephone with the membership and staging a board meeting. He was able to make contact with 18 of the Super League’s 21 clubs.

“That went very well,” Morris told the Express yesterday. “I hope that we can work together to make the Super League better and by extension Trinidad and Tobago football and further, to continue to provide opportunities for our players to deter them from a life of crime.”

He added:”The feedback from them was that they appreciated the call and they extended the greetings back to me. My feeling was that they felt that we could make this thing work.”

Morris also reported positive feedback from the board meeting. “That was excellent,” he said. “I got the opportunity to outline that I need the love and support of the members, meaning putting love into what we do and to refocus on the TTSL’s objective —to make the Super League the best league in the country. It’s one of the Associations that has money in the account right now...It runs on time.” And Morris noted that, “the support is there. I am sharing the responsibility. I don’t want to micro-manage.”

Morris is also keen to have all teams become compliant, including the seven currently suspended ones who were not allowed to vote in last month’s elections. “My vision is to get the clubs totally organised...We want to make sure all the clubs are compliant. If you want people to invest, you have to have your house in order,” he said.

And despite the current Government restrictions that prevent competition in contact sports like football, Morris still hopes the League can fulfil the second item in his eight-point plan and resume at its usual time in June. To this end, the TTSL is attempting to set up a pre-competition and in-competition Covid-19 policy.

“From feedback, we have to get a standard form that must be filled out. One of the board members from Tobago has taken the initiative to fill out the form. That form will be forwarded to the Ministry of Health and they in turn will give us the Covid policy to follow,” Morris said.

And despite the difficulty the League has had in attracting sponsorship prior to the advent of Covid-19, Morris said: “We still have to keep trying...to show them (sponsors) this is something that can keep the players active.”

The TTSL president will settle for limited, targeted sponsorship. “If you can assist with two or three players in a club that would help.”