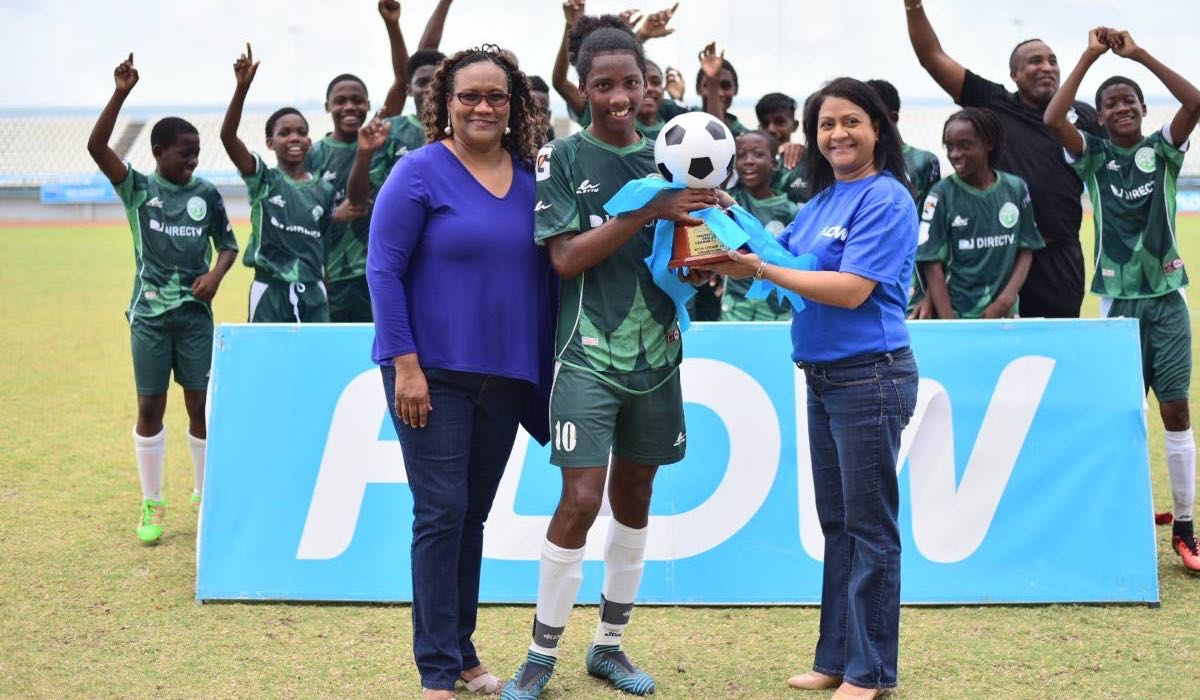 Sunday last was a day to forget for San Juan Jabloteh after the favourites lost all three finals of the inaugural Flow Youth Pro League (FYPL) Cup at the Larry Gomes Stadium, Malabar.

All three titles went the opposite way by teams coached by members of the famous T&T 1989 ‘Strike Squad’ which came to within a point of qualifying to the 1990 Italy World Cup.

W Connection first ended a three-year drought at youth level when it edged Jabloteh 2-1 to win the Under-14 FYPL Cup under coach and former T&T striker Leonson Lewis.

From as early as the fourth minute, W Connection took command of the match through Joel Maitland-Wilson’s opener and in the 17th minute, Dantaye Gilbert made it 2-0 in the 70-minutes contest. Two minutes into the second-half, Jearon Ellis sliced the margin in half for Jabloteh but in the end, W Connection held on for the win to hand the club a first youth title since winning the YPL Under-16 championship in 2014 An elated coach Lewis reminded that his W Connection U-14 side remained unbeaten all season.

He said, “In total being unbeaten all season is the most inspiring thing for us. We’ve drawn games we should have won but we never lose and to end the season like this, as Cup champions, is the best feeling ever.”

W Connection star forward Molik Khan said it was a great achievement to snatch the FYPL Cup after mistakes cost his team the league title.

“Whenever you play a team like Jabloteh it’s never an easy game, and it will only take hard work and a good team like W Connection to come away with this victory,” said Khan.

Club Sando, coached by former T&T goalkeeper Michael ‘Brow’ Maurice, then handed the ‘San Juan Kings’ a second defeat on the day when it captured the U-16 FYPL Cup with a 3-2 penalty-kicks win after holding the league champions to a 0-0 draw.

During the match, Jabloteh’s chances of securing the title took a major blow when attacker Jerry Morris suffered a suspected concussion with just over quarter of an hour played and was taken away by ambulance for observation at hospital but was released on Sunday night.

Speaking after the match, coach Maurice was elated to lead the ‘Oranges’ to their first club title since becoming a Pro League member club in 2015 but heaped the praise on Keon Trim, the coach he replaced just ahead of the FYPL Cup.

Maurice said Trim had done an excellent job with the Club Sando U-16 outfit which maintained their unbeaten campaign with the final win over Jabloteh.

Jabloteh U-18s ended the day the way the club started, in the agony of defeat, despite a double from star forward Kesean St Rose (21st & 51st), in a 2-4 loss to W Connection.

Doing the damage for Brian Williams- coached W Connection was Jevaughn Humphrey with a second- half double in the 62nd and 90th minutes after team-mates Kiron Manswell (26th) and Christian Ransome (73rd) had found the target.

Williams was in high praise of his players who he said showed excellent character to defeat Jabloteh. The W Connection U-18 coach believes the future is bright for his players but what affects their progress is moving from one place to another.

“For instance, after this (Youth Pro League) they go to their college teams and we don’t have them for a long time, whereas if they are continuous with a club their development won’t be interrupted.”

Down at the Mannie Ramjohn Stadium, Marabella, Defence Force (U-14); Pt Fortin Civic (U- 16) and Police FC (U-18) ended in third in their respective divisions.

W CONNECTION and Club Sando were the major winners on Sunday, as the Flow Youth Pro League Cup ended.

On the other side of the coin, San Juan Jabloteh will not want to remember the day as they were beaten in all three finals. They lost to Connection (Under-14 and Under-18) and Club Sando (Under-16).

The respective finals were staged at the Larry Gomes Stadium in Arima, while the third-place matches were contested at the Manny Ramjohn Stadium, Marabella.

Former Strike Squad striker Leonson Lewis coached Connection to a 2-1 win in the Under-14 final.

Joel Maitland-Wilson put Connection ahead after four minutes, followed by Dantaye Gilbert’s effort in the 17th. Jearon Ellis pulled one back in the 37th but Connection held firm until the final whistle. According to Lewis, “Being unbeaten all season is the most inspiring thing for us. We’ve drawn games we should have won, but we never lost, and to end the season like this (as Cup champions) is the best feeling ever.”

Defence Force defeated Point Fortin Civic 4-3, courtesy kicks from the penalty spot, after the scoreboard read 1-1 at the end of full time.

Connection were also in winners’ row in the Under-18 final, by virtue of a 4-2 result over Jabloteh.

Police pipped North East Stars 4-3 in the third-place contest. Finding the back of the net for Police were Kai Phillip (23rd and 34th), Zion McLeod (46th) and Elijah Joseph (64th), with Jonathan Gloudon (12th) and Jaydon Prowell (18th and 40th) replying for Stars.

Coach Brian Williams was in high praise of his Connection players who he said showed excellent character to defeat Jabloteh.

But the ex-Strike Squad right-back commented, “After this (Youth Pro League) they go to their college teams and we don’t have them for a long time, whereas if they are continuously with a club, their development won’t be interrupted.”