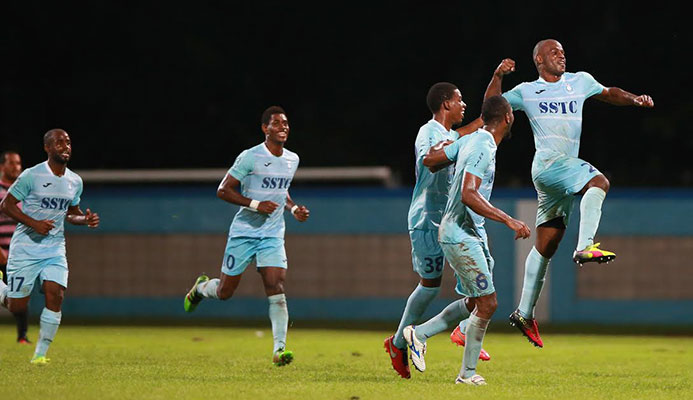 Police FC were all guns blazing on Tuesday night when they qualified for the main draw (quarter-finals) of this season's Digicel Pro Bowl with a comprehensive 9-0 win over Point Fortin Civic at the Hasely Crawford Stadium.

Elijah Belgrave bagged a hat-trick while brothers Kareem and Jameel Perry got a double each during the lopsided affair that also saw Kadeem Riley, Dexter Alleyne and substitute Micah Lewis get on the scoresheet for the Lawmen in qualifier one at the Port-of-Spain venue.

Like Police and Civic, St. Ann's Rangers and Morvant Caledonia had to also contest the qualifying round of the Pro Bowl due to their bottom-four positions on the Digicel Pro League standings after last weekend's Round Two Match Day Eight.

Rangers, following a 0-0 stalemate in the second qualifier of the night, defeated 2008 Pro Bowl champions Morvant Caledonia 5-4 in sudden death of a penalty shootout to book their place in this season's quarter-final draw, which will determined during the official launch today (Wednesday).

Rangers’ goalkeeper Cleon John was in terrific form between the sticks for the St. Ann’s club with three saves in the shootout—denying Morvant Caledonia’s Keron Bethelmy and Jameel Neptune, then Kordell Samuel in sudden death.

Police however, were unstoppable from the first whistle and showed no mercy against the side that spent all season anchored at the bottom of the Pro League standings.

Coach Richard Hood's men were in front from as early as the second minute after Belgrave swooped in on a rebound to hit past goalkeeper Miles Goodman, who had kept out an initial attempt from Perry (K).

Belgrave, enjoying the night in an attacking role, made it 2-0 on 16 minutes after controlling a diagonal Perry (J) pass inside the box and firing low beyond a hapless Goodman.

The ok-built Belgrave, usually at centre-back for Police, missed out on a third on the half-hour mark when he struck high from the spot after Reigh Alexander had brought down Perry (K) inside the box.

But Belgrave completed his hat-trick ten minutes from time with a low left-footed drive past Goodman for the Lawmen's ninth goal following an enterprising solo move by substitute Christon Thomas, who unselfishly picked out his teammate in the middle of the area.

Belgrave was also instrumental in his side's third item to go into the break with a 3-0 lead after his pass in the 44th-minute set Perry (K) free to lob an onrushing Goodman from 18-yards out.

Police, positioned seventh on the DPL standings, ahead of, in descending order, Rangers, Morvant Caledonia and Civic, showed off their flair with six more goals in the second half.

Like early in the first half, Goodman conceded again on the rebound five minutes after the break when Riley smashed in a rebound from the edge of the six-yard area to put the score at 4-0 after the Civic goalie had blocked out an effort from Perry (K).

And, with a spectacular diving header in the area by Alleyne in the 57th-minute to meet a right side Belgrave free-kick, Police were 5-0.

Police, though, didn't take their feet off the gas even with their food at their mouths.

A minute after Alleyne's headed goal, Perry (J) was celebrating his first on the night. The lanky forward had controlled a Riley cross off his chest before volleying past Goodman from the middle of the area to make it 6-0.

Ten minutes later and Jameel's brother Kareem completed his double before quick goals by Micah Lewis and Belgrave in the 79th and 80th minutes made it 9-0.

The popular question among those present: What's the score now? And the final answer: 10-0, Police recording the highest scoring win in all competitions this season after Perry (J) completed his double in the second minute of stoppage-time.

Police returns to play on Friday in their final league game of the season against Morvant Caledonia from 8pm at the Ato Boldon Stadium, following a 6pm kick-off between fifth-positioned Club Sando and Rangers.

The final slate of league matches will continue over the weekend with Point Fortin Civic hosting Defence Force from 5pm at the Mahaica Oval on Saturday, and simultaneously from 3:30pm on Sunday, for the crowning of this season’s DPL champions, leaders Central FC (44 points) are against third-positioned San Juan Jabloteh (29 points) at the Ato Boldon Stadium and second-placed W Connection (43 points) will take on fourth-positioned Ma Pau Stars (28 points) at the Manny Ramjohn Stadium.