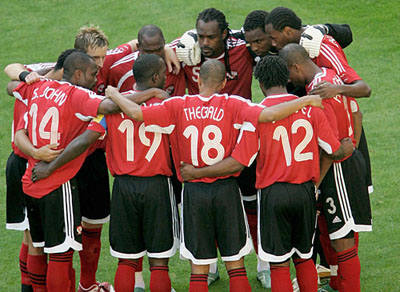 Eight years after they were promised a bonus for their appearance at the 2006 FIFA World Cup in Germany, 13 members of the Soca Warriors will be paid the outstanding balance of US$1.3 million.

“I have given instructions to the Minister of Finance (Larry Howai) to make provision for the outstanding US$1.3 million to be made available to these heroes,” Prime Minister Kamla Persad-Bissessar announced yesterday.

“This payment is to be made,” Persad-Bissessar said “without prejudice to any rights and remedies already accrued, or, which may accrue to the Soca Warriors.”

She made the announcement at the Diplomatic Centre, St Ann’s in the presence of seven of the players, including Brent Sancho who has been leading a legal battle to be paid the sums owed them. The other Soca Warriors members present were Cyd Gray, David Atiba Charles, Stern John, Cornell Glen, Anton Wolfe, and Aurtis Whitley.

While Government was under no legal obligation to make any payment to the players, Persad-Bissessar said, “we are not unmindful of the long and protracted legal battles waged by these football heroes of ours, and the situation today is that the players are still owed and entitled to a payment from an entity in the TTFF (Trinidad and Tobago Football Federation) that is unlikely to be in a position to pay.”

Recalling that in 2006, the Soca Warriors joined the world’s best in Germany, she said, “For eight months, from qualification in Bahrain in November 2005 to the end of the World Cup in June 2006 our nation soared with pride with the efforts of our team.”

When TT - the smallest nation ever - qualified for the mega sporting event, she said, “It was a moment that unified us like never before.”

“They healed every national wound, bridged every divide, and brought us together across all boundaries, there were no political, social, religious or ethnic differences, we acclaimed ourselves and embraced each other in a celebration of genuine patriotic pride,” she said.

However, the failure to honour a promised bonus marred all that went on before and a legal battle ensued.

The judgement in the arbitration that followed, she noted was that the players were entitled to 50 percent of the net profits TTFF derived from “the Road to Germany 2006 campaign.”

After consulting with members of Cabinet, including Attorney General Anand Ramlogan and Howai, Persad-Bissessar said, Government agreed to pay the balance owed.

She spoke shortly before leaving for a visit to Brazil with her grandson. “I want to assure you,” she said “that not one cent of Government’s money is being used for this private visit.”

Speaking on behalf of the 13 players, an emotional Sancho said he was overwhelmed and Government’s decision meant “more than any of us can describe.”

He recalled that when they returned to Piarco from Germany they were greeted as heroes.

“We didn’t expect asking for what we were promised to be met with eight years of humiliation, torment, blacklisting and even in some cases career loss,” he said.

While many had turned their backs on them and ignored their pleas, he said they had finally been heard.

Expressing thanks to the team members who endured the legal battles over the years and to Persad-Bissessar and her Government, Sancho said, “We recognise that the government has no legal obligation to assist us, yet chose to do so through this gesture.”

Asked whether the 2006 Soca Warriors will drop their legal battles, now that Government has paid the outstanding debt, Sancho said, “While this money is important for us, we still feel there is unfinished business. We intend to push on. We have suffered for a very, very long time.”

The legal battle will continue, he said in the hope that they can repay Government.

Meanwhile, TTFA president Raymond Tim Kee told Newsday he was “extremely pleased that Government has come through now. We requested that assistance so that football can breathe somewhat.”

The TTFA, he said began discussions with the Office of the Prime Minister for Government to pay the outstanding balance about six months ago and followed up in writing. He said they last met two weeks ago.

Asked whether the payment means that the TTFA does not owe the players anymore, Tim Kee said, “That is what we have been requesting, that Government pay on behalf of the TTFA.”

On assuming the TTFA presidency, he said, he acknowledged that the former players were owed the bonus promised by the old dispensation. After an issue was made out of it, he said, “We paid them what we could. We sought help from CONCACAF.”

Having run bankrupt, he said the TTFA sought Government’s assistance.

In 2006, former FIFA vice-president and Trinidad and Tobago Football Association (TTFA) special advisor Jack Warner, who is also a former Minister of Works and National Security in Persad-Bissessar’s Cabinet, negotiated a bonus agreement with the country’s World Cup players that was never honoured.

Warner’s refusal to hand over accounting documents to the football body or the High Court meant that, even today, no one knows the true figure generated by the country’s historic appearance at the Germany World Cup.

However, the 13 “Soca Warriors” who took the TTFA to court agreed to settle for US$3 million and, today, Persad-Bissessar instructed Finance Minister Larry Howai to pay the outstanding US$1.3 million (TT$8.3 million) to the players.

“It was a moment that unified us like never before,” said Persad-Bissessar, about the players’ World Cup debut. “They healed every national wounds, bridged every divide…”

“On behalf of those of us who have been fighting a long, tough legal battle to get our just due payment for our efforts at the FIFA World Cup, Germany 2006,” said Sancho, “this moment means more than any of us can describe.”

Persad-Bissessar left the press conference to head straight for the Piarco International Airport and a flight to Brazil for the World Cup. She told reporters that her trip was a private affair and will not be paid for by taxpayers.

“I leave later this afternoon on a private visit to Brazil with my grandson,” she told the Trinidad Express. “I want to assure you that not one cent of Government’s money is being used for this private visit.”

There was no suggestion that Sport Minister Anil Roberts or the present Trinidad and Tobago Football Association (TTFA) played any direct role in the settlement.

Insiders suggested it might not be coincidental that the Prime Minister’s sudden concern for the players follows close on the heels of a series of damaging exposés in the Trinidad Express about the controversial Life Sport programme, which is linked to death threats for Ministry of Sport permanent secretary Ashwin Creed and Life Sport director Ruth Marchan and at least one murder.

Two years ago, former Trinidad and Tobago goalkeeper Kelvin Jack, in a Wired868 column, accused the Prime Minister of twice ignoring letters for assistance in resolving the matter.

“Twelve other 2006 World Cup players and myself are lost for words and disenchanted with the Honourable Prime Minister’s silence,” stated Jack. “I understand that the Prime Minister is a very busy person but, in my opinion, she has no excuse for not acknowledging receipt of our correspondence.

“It is disrespectful, not only to my teammates and I, but also to the citizens of my homeland since taxpayers directly contributed at least $80 million of the TTFF’s 2006 World Cup revenue.

“I am presuming—although I still hope I’m wrong—that the Prime Minister isn’t bothered if a member of her government, Works Minister Jack Warner, is yet to account for over $200 million that my team mates, myself and our beloved fans helped generate when we qualified for the 2006 World Cup.”

Even after Warner’s disgraceful fall from office in 2013, Persad-Bissessar and her government showed no public interest in the players’ case.

The players, who were awarded the Chaconia Gold medal winners after Trinidad and Tobago became the smallest nation to qualify for a senior FIFA World Cup, responded by turning up the pressure on the TTFA.

Tim Kee, who was a vice-president throughout the scandal, replaced Oliver Camps at the helm of the TTFA in late 2012. And he, along with Phillips and Jeffrey Webb, Warner’s successor as CONCACAF president, convinced the players that were keen to settle with an opening payment on 20 May 2013.

But the good rapport did not last as the TTFA never completed its second court-ordered payment in September and the Warriors vowed to resume legal action.

Tim Kee, who is also the Port of Spain mayor, responded by threatening to deny the players their due by starting a fresh organisation; while a Phillips press release said the football body would “continue uninterrupted” despite impending legal action from the Warriors.

The TTFA had already showed no inclination to follow the instructions of the High Court and sue Warner, the former TTFA special advisor, for allegedly misappropriating football money. The football body suggested, via press release, that the matter was statute barred although Phillips later backed away from this position after the players’ British attorney Michael Townley rubbished the claim.

Behind the scenes, Phillips appealed first to the Sport Ministry and then the National Security Ministry to wipe out its estimated $28 million debt, which also includes outstanding payments to former national coach Russell Latapy and ex-technical director Anton Corneal.

Privately, he told the Warriors to expect Cabinet approval for their payment before Carnival 2014. But months passed without any inkling that Griffith would come to their rescue.

Instead, another party allegedly suggested to the Prime Minister, during the first round of the Brazil 2014 World Cup, that it would be a wonderful gesture if the Warriors were paid off before the completion of the tournament and while the nation was seduced by the power of football.

The figure, who is independent of the government and the TTFA but has a sport background, asked to remain anonymous.

Persad-Bissessar supposedly replied that she would give “active consideration” to the players’ settlement. The Attorney General is believed to have played an active role in resolving the matter.

“The Prime Minister is a football fan,” claimed the third-party. “All she needed was to be reminded that it was an unresolved issue… She thought it was a court matter and she could not intervene.”

The suggestion that the Prime Minister was unaware of the status of the bonus dispute flies in the face of widespread and readily available information on the matter; not to mention letters to her office from the players themselves.

However, two other persons close to the negotiations—including a 2006 World Cup player—confirmed that the final settlement with the government was instigated by a party independent of the TTFA.

Today, Persad-Bissessar confirmed that her government had decided to pay the players for their historic achievement.

“On behalf of the Soca Warriors Online members who stuck it out over the years enduring so many legal battles,” said Sancho, “may I take the time to express my gratitude to the Honourable Prime Minister and her government for this heart warming gesture.

“We recognize that the government has no legal obligation to assist us yet chose to do so through this gesture. All of Trinidad and Tobago can breathe a collective sigh of relief that a moment that brought us all so much happiness and pride is free of any grievance…

“We will all follow the events in Brazil this week with an unfettered spirit and only great memories of the time the Trinidad and Tobago anthem played on the football field in Germany.”

There is still no word, though, on if Warner will ever be asked to account for the missing millions that taxpayers will now foot.