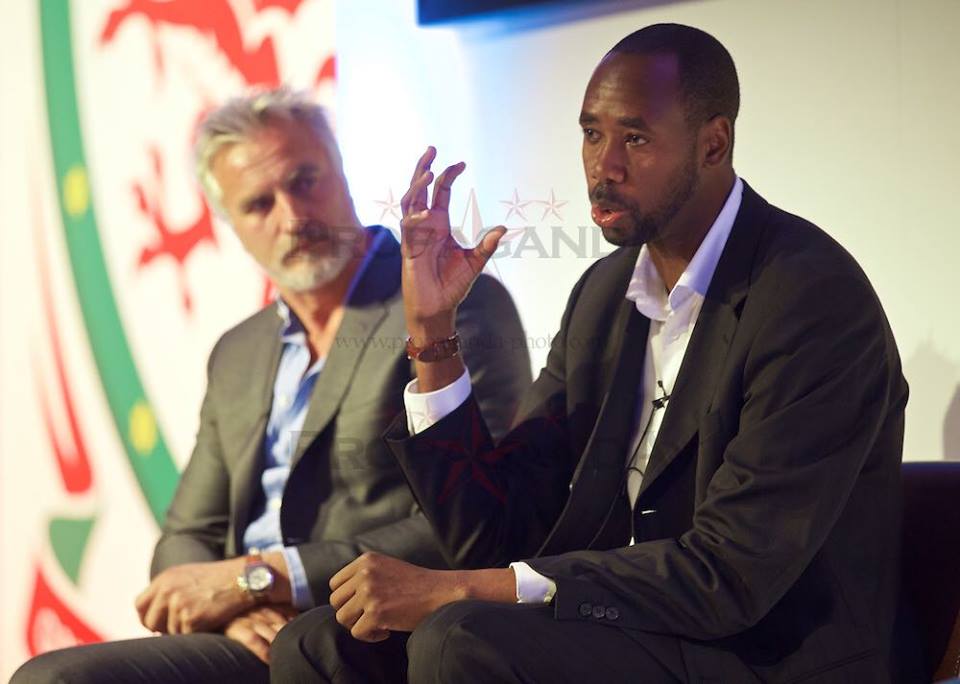 Some Reactions on Dennis’ appointment.

Former national forward Stern John told TTFA Media “It’s a fantastic opportunity for Dennis. He has been coaching at a high level  for some time  and is good to see the Association has seen it fit to give him this opportunity now. I know he will give it one hundred percent and it is important that he also receives the fullest support of the FA which I am sure they will do, the players and everyone involved in the game locally as well as the country on a whole. It’s the only way we can move forward as a nation in football.

“Dennis is one  of the younger coaches on the scene now. He will bring  new ideas and philosophies and I am looking forward to see him in charge of our national team,” John added.

Carlos Edwards has been Lawrence’s teammate since their playing days at Defence Force, then at Wrexham and the National Team. He had the following to say.

“I think it’s a really good decision. His passion and commitment to the game is second to none. From the time he started accumulating his coaching badges, he dedicated everything to himself and his development in order to fulfil his ambitions,’ Edwards said.

“I think this opportunity now is the best thing for Dennis and the country on a whole. He will always be the man who played a critical role in taking us to the 2006 World Cup with his efforts throughout the campaign and the goal against Bahrain and now with his experience and being in the Premiership has made him into a better coach, rubbing shoulders with the best coaches and players in the world.

“Dennis is a very smart guy when it comes to the game and it’s different to just playing the game but also knowing the game and studying it. He  has the sixth sense about the game and  his leadership will be valuable. Obviously he will have his own methods of coaching and dealing with the players.

“From  his days at Defence Force where we played together, you could see something special in him and his desire to coach at the highest level and he has maintained that passion past his playing days,” Edwards added.

“I am really happy for him. We always spoke about his desires to coach and moreso coach a national team and he always told me when the time is right.

“I always asked him that question after his playing days and then while he was working with Roberto Martinez.

Trinidad and Tobago football is in a difficult stage after getting to a decent level over the past couple years with the performances at the Gold Cup and reaching the Hex, and what we need is someone good to continue the process and I think he will be able to contribute towards this. What will be important is him getting the support from the  FA, the players, his staff and the fans, in realising the dream of qualification for Russia 2018 which I believe is still alive. I am happy for our brother and wishing him all the best,” Theobald added.

Dennis Lawrence was today officially announced as the new Head Coach of the Trinidad and Tobago Men’s Senior Team.

On his appointment, Lawrence said today “I feel very honoured and humbled by this opportunity and the confidence placed in me by the Association. I have given my all for Trinidad and Tobago as a player and now relish this opportunity to contributes Head Coach of the National Team.”

Here are some interesting facts about the new man in charge of Men’s Senior Team.

-Between 1992-2000, he played locally in his homeland of Trinidad and Tobago with Barataria Ball Players, Caledonia AIA (now Morvant Caledonia United) and Defence Force.

– He had his first overseas trial with Newcastle United in 2000 under then manager Bobby Robson and then Bolton Wanderers. He would later sign for Wrexham in 2001, joining countryman Carlos Edwards and Hector Sam with Englishman Mike Berry as his representative and this relationship has been maintained up to this day.

-After Lawrence scored the winning goal that qualified T&T for the 2006 World Cup Finals, in a 1-o win over Bahrain in Manama on November 16th, 2005, Lawrence spent close to two hours away from his teammates as he was randomly selected for a drugs test after the match. All this time, Dwight Yorke and the rest of the squad were partying and celebrating their qualification in the dressing room. “It did took a bit of the shine off it,” he said at the time.

-He tasted English Football League One title success with Swansea City in 2007/2008.

-Born August 1st, 1974, he made 89 international appearances for Trinidad and Tobago.

-He was named Caribbean Cup Most Valuable Player after helping T&T to the regional title in 2001 under former head coach Ian Porterfield.

-Lawrence joined Wigan Athletic as a coach after impressing Spanish coach Roberto Martinez in October 2010. Lawrence then went on to become a first team development coach at Everton under Martinez and then a scout for the Belgium National Team of which Martinez is now the head coach.

The UEFA Pro Licence is a coaching licence from UEFA, the official governing body of European football. The licence is the highest coaching certification available and follows the completion of the UEFA ‘B’ and ‘A’ licences.

A UEFA Pro Licence is required by anyone who wishes to manage a football club in the top level of a European nation’s league system on a permanent basis, i.e. more than 12 weeks (the amount of time an unqualified caretaker manager is allowed to take control). This applies to both the head coach or team manager, and such a licence is also required to manage in the UEFA Champions League or UEFA Europa League.

“I feel very honoured and humbled by this opportunity and the confidence placed in me by the Association,” said Lawrence, in a press release. “I have given my all for Trinidad and Tobago as a player and now relish this moment to contribute as head coach of the National Team.”

It is uncertain at this point whether he eventually agreed a two or three year deal.

Lawrence, who was employed as a scout for the Belgium National Senior Team at present, pulled out of talks on Friday morning after the football body amended their initial deal with controversial termination clauses and then seemed unable to explain them.

The TTFA wanted the right to sack the six foot seven Lawrence for gross misconduct if the Warriors slipped six places in the FIFA ranking or had less than a 40 percent success rate. But, in a subsequent phone call, Lawrence’s agent, Mike Berry, claimed TTFA president David John-Williams did not know if draws counted as success and promised to get back on to him.

John-Williams’ failure to do so in a timely fashion added to a growing unease about the sudden direction of the negotiations and Lawrence announced that the deal was off.

The scuppering of the talks led to a furious response from some TTFA board members who blamed John-Williams for bungling the talks.

John-Williams, who is the co-owner of W Connection football club, was allegedly keen to have his own employee, Stuart Charles-Fevrier, take over the National Senior Team.

It is uncertain what role, if any, was played by the board and the angry public response to John-Williams’ perceived meddling. But the TTFA president is believed to have subsequently applied fresh zeal to the pursuit of the 42-year-old coach.

And, by Saturday morning, the deal was concluded.

Remarkably, the TTFA tried to take credit for the supposed speed of the appointment, which came two months after the replacement of former head coach Stephen Hart and almost two weeks after the departure of his shambolic replacement, Tom Saintfiet.

“The TTFA has worked diligently to complete the selection process ahead of our intended next Monday deadline, and this press release is now being made in order to quell further speculation and keep our stakeholders informed.

“Dennis will arrive in the country next week where he will hold a press conference and meet with members of the local football fraternity to determine the rest of his support staff.”

Lawrence has never worked as a head coach although he served as assistant to Roberto Martinez at Wigan Athletic—where they edged Manchester City to the FA Cup title in 2013—and Everton FC.

Intriguingly, like his predecessor Tom Saintfiet, Lawrence was not the first choice of the TTFA’s technical committee. Or the second.

Fevrier was the coach who the technical committee felt was the best man for the job of leading the Warriors. Ex-Central FC and San Juan Jabloteh coach Terry Fenwick, a former England international defender, was next on the list.

However, in a meeting on Wednesday night, the TTFA board of directors decided to overrule its technical committee’s recommendations in favour of the lanky defender whose goal took Trinidad and Tobago to the 2006 World Cup.

He has included former club and international teammates Stern John, Angus Eve and Hutson “Barber” Charles as potential assistants for his technical staff, along with two unnamed England coaches and one from the Netherlands.

Charles, a Strike Squad standout who played with Lawrence at the Defence Force, was a member of Hart’s coaching staff, which steered Trinidad and Tobago into the Concacaf Hex.

The Trinidad and Tobago Football Association (TTFA) is pleased to announce that Mr Dennis Lawrence has accepted the position of head coach of the Men’s Senior National Team.

The TTFA has worked diligently to complete the selection process ahead of our intended next Monday deadline, and this press release is now being made in order to quell further speculation and keep our stakeholders informed…

Dennis will arrive in the country next week where he will hold a press conference and meet with members of the local football fraternity to determine the rest of his support staff.

In accepting the appointment, Dennis Lawrence stated: “I feel very honoured and humbled by this opportunity and the confidence placed in me by the Association. I have given my all for Trinidad and Tobago as a player and now relish this moment to contribute as head coach of the National Team.

“Of course I am coming into a difficult situation and we have to take each game very seriously and put our best foot forward. The experience I gained working under different coaches during my 89 international caps for T&T and my exposure in coaching has all helped to shape me. I intend to give my very best towards this national effort.”