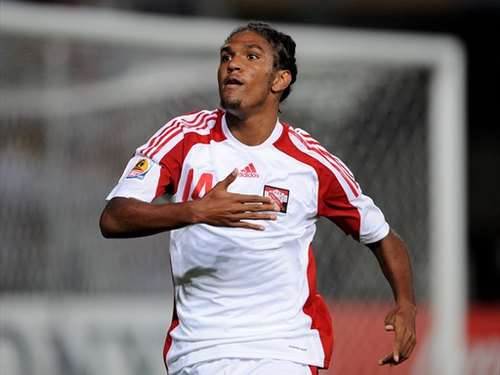 “I does watch myself in the mirror every day,” former T&T national youth and senior team midfielder Jean-Luc Rochford confessed. “[I ask myself] how you come from being a national player, from scoring in a World Cup, from creating history, to being somebody who cyah even play the game they love? I feel like a total failure.”

Rochford has an ACL injury, which requires surgery. With luck, the tired Arima native will be able to get it done at the San Fernando General Hospital soon.

“Mt Hope say they don’t do the surgery there,” a still hopeful Rochford told Wired868, “but San Fernando seem like they really willing to help. They already ordered the equipment and thing already. I on top the list so I am just waiting on a date.”

It may happen. If it doesn’t, it won’t be the first time. And the 27-year-old will see his whole world, built around a promising football career, continue to crumble…

In 2009, T&T football fans all celebrated as an 18-year-old Rochford wheeled away in celebration after silencing a 74,000-plus crowd at the Borg El Arab Stadium in Alexandria, Egypt, in the opening match of the FIFA Under-20 World Cup against the hosts.

That was then. Today, a forgotten, struggling, almost broken Rochford battles with his harsh new reality, far from the eyes of the world, the fans and, worst of all, those who have it within their power to render assistance.

“This is the worst thing that ever happened to me,” he told Wired868. “Angus [Eve] drop me in the [Trinidad and Tobago National] Under-23 and that never hurt me like this. It’s so much. It’s just depressing.”

Let’s go back: It is 12 August, 2016. Rochford is at the Larry Gomes Stadium training field. North East Stars pre-season training is in progress and he is bidding to earn a contract with the club for the 2016/17 season.

Fate steps in. His foot goes down in a hole on the field, he twists his knee and tears his anterior cruciate ligament (ACL).

Fast forward 18 months to the present.

“You feel I wanted to get injured?” he asks Wired868 rhetorically. “You feel I put my foot down in the hole for spite to twist my knee? No!”

“I dedicated my life to football and to the country,” he adds, “and I just asking for a lil bit of help. I not even asking for money, that’s the thing. I asking for a letter to go to the public hospital (to get to the top of the list) to get the surgery done.

“I asked the people who I think I should have asked—the Minister of Sport, the Federation (TTFA), North East Stars, Ross Russell (North East Stars head coach at the time). They ain’t even help me do nothing. When I get injured, it was just like whatever.”

To be fair, although the people and entities he identifies have not been very helpful, others have been in Rochford’s corner, 2006 World Cup veteran Carlos Edwards among them.

Edwards, who has suffered similar injuries in the past, returned from the UK to play for North East Stars for the 2016/17 season, the first time in 16 years that the former England Premier League winger—nicknamed “Rolls Royce” by Sunderland fans—had suited up in local club colours.

Rochford turned to Edwards for advice soon after his injury and, under the guidance of former National Team doctor Terence Babwah, he was advised to have an MRI done to confirm the extent of his injury.

A request to North East Stars for assistance in getting the MRI done met with repeated run-arounds and fob-offs for several months.

Completely disenchanted by North East’s lack of real response, Rochford contacted Minister of Education Anthony Garcia, both his former principal at Fatima College and his Member of Parliament.

Thanks to Garcia, NCRHA Health Director Dr Rodney Ramroop arranged for the MRI to be completed at Mt Hope in December 20. Free of charge.

The MRI confirmed the existence of an ACL tear which, it also confirmed, would require surgery. The surgery at a private institution, Rochford discovered, would cost some TT$30,000.

Knowing that that was well beyond his financial means, Rochford began some fund-raising initiatives and actively sought assistance from various bodies.

In April 2017, he successfully raised about TT$14,000 through a BBQ. Still short of his target, he reached out to another medical doctor specialised in sports medicine who began working to see what could be done.

In early May, she presented the beleaguered former national player with a list of private and public institutions he might try. Because Sangre Grande Hospital had openings in its orthopedic surgical list at the time, it was decided to try his luck there.

At last, a glimmer of hope!

A mirage! To date, there have been four surgery appointments—and four postponements. From lack of equipment to shortage of beds to surgical doctor absenteeism, Sangre Grande Hospital cited a number of reasons for the delays.

“They told me the surgery was 19 August,” Rochford told Wired868. “My grandmother had died right before but 18 August I went up to the hospital because they told me I had to get warded but they had no beds. From 8am to 4pm, I was up there waiting and nothing.

His frustration mounting, Rochford turned his focus to getting a letter from Minister of Sport Darryl Smith and TTFA General Secretary Justin Latapy which attested to his service to the country over the years. With it, he hoped to make a request for priority surgery at one of the hospitals in the country.

“I asked Cornell Glen, who is my personal friend [for help],” Rochford explained. “He knows the Minister of Sport pretty well so he called him. The Minister said he would dig into it and try to help me out as soon as possible.”

“That was five months ago,” he added, holding up an open palm. “No word from him yet.”

“I asked the Federation (TTFA) and I was told I didn’t get injured on the national team so they can’t help, they don’t have no money, this, that and the other.

“But I was just asking for a letter. I spoke to Justin. Same thing: run-around!”

Currently, the funds raised from the BBQ have all but disappeared, for medication, painkillers and therapy expenses having whittled away at them. And Rochford is hurting—in more ways than one.

“It hurts,” he told Wired868. “This is my career! I just trying to get back on the field because this is my way of making a living.”

Rochford’s family is rich but in footballing talent. Older brother Jovan is the assistant coach of TTSL 2017 runner-up FC Santa Rosa and his younger brother Jean-Paul is a former T&T National Under-17 midfielder and a QRC standout. But they are a family of modest financial means.

“I doh really depend on [my parents],” the middle brother told Wired868, “I doh really ask them for anything. But still like, if they need help, I cyah do anything,”

“They seeing me hurting,” he continued. “As my mother say, she doh like how depressed I does be, how down I does be. She doh like that because that’s not who I am. She seeing that it hurting me and she find I shouldn’t take that hurt and change who I am.”

“She seeing that I want it to happen and it not happening.”

There are three things he wants to happen. The first is that the help he needs materialises so that he will be able to join his siblings on the field of play once more.

“First of all I want to play football. That’s the love. I just don’t want to say alright career done, that’s it. I would like to play until about 32 or 33 and then I could see myself going into the coaching.”

Number two is that his dream remains alive.

“Like I had an agent working for me and I was getting through for El Salvador and these places. I just come and get injured.

“The only part of my dream that I ain’t fulfill as yet is playing abroad. Once I can play abroad, that’s it for me then.”

But for him, the really big, urgent one is to get the surgery done.

“…because I know later down in life it will humbug me. Because if I getting pain now, imagine when I am 40 or 45, the pain will be unbearable. I don’t want it to reach there. It’s just a little help I asking for.”

His pain, his frustration is palpable. But through it all, he has not forgotten the efforts made by his football colleagues like Jan Michael Williams, Leston Paul, Aubrey David, Yohance Marshall, Sheldon Bateau, Ryan Stewart and the others who continuously try to keep his hopes and his spirits up.

“Jan and the others call just to check up on me because they know I down and depressed. It’s hard but I still have to thank some people.”

Chief among these “others” are the medical doctors and the Education Minister. Without them and their efforts, he ended on a positive note, all would seem at the moment lost.

“Mr Garcia real try, Dr Ramroop real try, some of the others real try too,” he said, a forced smile playing at the corners of his mouth. “Babwah still trying so hopefully this one pulls through.”


Editor’s Note: Offers to assist Jean-Luc Rochford tumbled in to Wired868 within minutes of this story’s publication including contact made from representatives of the Public and Private Sector and Health Minister Dr Terrence Deyalsingh. We will update readers on Rochford’s progress and would like to say “thank you” to his well-wishers.

This is the first in Wired868’s new monthly series, which aims to highlight social cases that merit national attention.