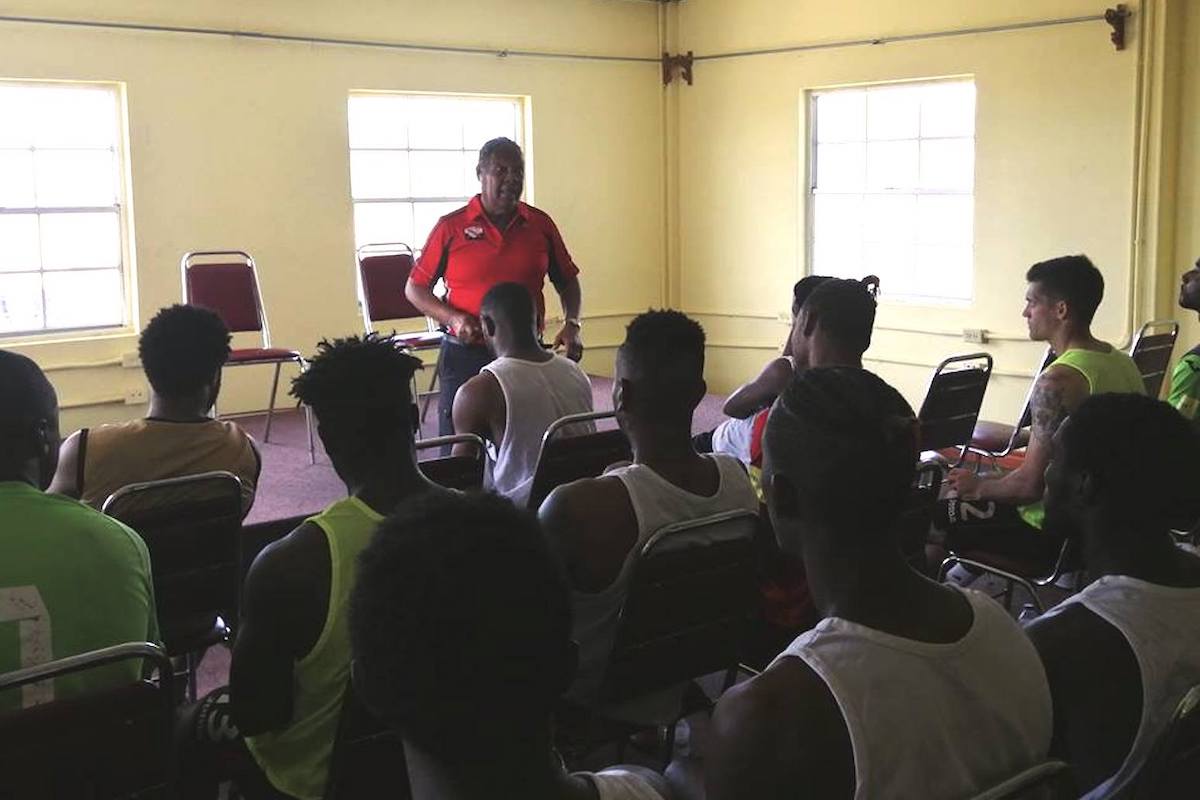 Dennis Lawrence invited and welcomed former national team player and coach Alvin Corneal to address members of the current Senior Men’s provisional training squad at the Larry Gomes Stadium on Tuesday. Lawrence’s intention was to have Corneal, one of the past greats of T&T’s football come in and speak to the players to share his wisdom and life knowledge gained through the game, reinforcing certain personal characteristics, responsibility, persistence, self-discipline, teamwork and representing the Red,White and Black.

“Being naturally talented is excellent but being a good player is a commitment,” Corneal told the players.

“Playing football is no longer just a game, it is a business, it is a commitment and a commitment not only to you but to your country. This game is a team game. This game is not about how I can dribble or shoot but how can I make the rest of the team develop. You have got the start thinking about the other persons and how they are thinking. We are all different in our thoughts. The personalities may be different between what you do here with Dennis and then when you go back to your clubs. You have to got to utilise your understanding to benefit from his work as oppose to also benefiting from the other’s work.

“I have learnt that there is nothing you can do as an individual that will win a game alone and there is nothing that you should do if one of your players makes a mistake on the field because he is a human being. Those things can reduce the support within the team,” Corneal said.

I honestly believe that we have some really natural footballers. How do you utilise it in the contest of the whole picture?” he asked.

“There are not too many teams in the world who pay an emphasis on winning the ball. Maybe they have a different philosophy. You have got to get that ball otherwise you can’t win, you can’t play if you don’t have the ball. This is one of the teams that I’ve seen where you guys give the impression that you are probably as capable as anyone I’ve seen.

The former Trinidad and Tobago cricketer and member of FIFA Technical Study Group emphasized on the importance of teamwork in order to attain success at the highest level.

“This is the only game in the world as far as I am concerned that you must work with each other, you must think for each other, You must listen to the coach as often as you can. Let me get into the act of doing things that you (Lawrence) want done. He has done a good job of it so far. We have got to understand it guys that yes you want to make the team but you also want to the team with the quality of being part of that team. Those are the important things,” Corneal continued.

The senior team preparations continues with daily sessions at the Ato Boldon Stadium ahead of the March 20th International friendly against Wales in Wrexham ahead of the Concacaf Gold Cup in June in the US.