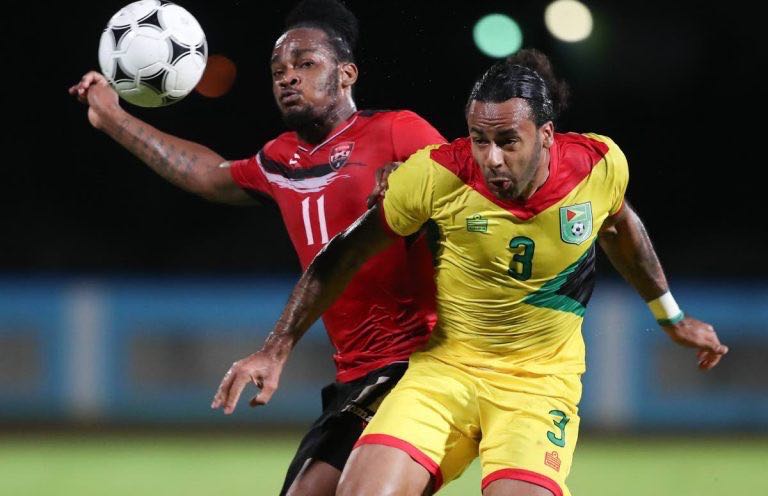 A clash of styles is anticipated when the Soca Warriors and Guyana Jaguars clash on March 25 in their opening match of the 2022 FIFA World Cup qualifying campaign.

The T&T team is coached by Englishman Terry Fenwick, 61, while Brazil's Marcio Maximo, 58, is in charge of the Guyanese.

Guyana Football Federation (GFF) president Wayne Forde told Newsday on Thursday, the team is revamping his style to play more like the five-time World Cup winners. Brazil is known for its "ginga" style of play. Ginga is a rhythmic style of free-flowing, attacking football with roots in capoeira.

Maximo, a former Brazil U-20 coach, got the nod for the Guyana head job in late 2019. He is assisted on the bench by compatriot Wilson Toledo and Guyana's Charles Pollard. The latter has been capped 80 times and played over a decade in the Pro League including at Jabloteh under Fenwick.

Forde said, "Guyana is trying to bring our style closer to a South American style.

"We are the only English-speaking country in the South America as you know. We have a Brazilian coach. We've always been attracted to the Brazilian, Argentine style. We're trying to develop that as our brand but with a European discipline."

Although keen on seeing a South American style of play, Forde said a sound structure is needed on and off the field to achieve success.

"Our technical director (Ian Greenwood) is from the UK.

"So one brings structure and discipline and one brings an organic philosophy for football."

Asked what he anticipates from a Fenwick-led team, Forde said he knew little about his coaching.

"I have absolutely no idea what Fenwick brings as a coach, but I did research and he played at the highest level and must be respected."

Fenwick, who was named T&T coach in December 2019, has yet to see his team in an official game.

However, training among local players has started and Fenwick made it clear they must follow his instructions or else.

He said, "It’s going to be very disciplined. They’ve got to play the game how I want. Otherwise they’re out."

The former Tottenham Hotspur defender reiterated the importance of playing T&T’s own brand of football and moving away from copying the styles of other nations. He believes T&T need to play the “style that suits us”.

He added, "It’s not about individual stars. We need to be competing as a team, in a well-structured manner."

Forde said the T&T vs Guyana rivalry has always been intense and he expects another exciting contest.

"Guyana versus Trinidad is always competitive, in any sport. Guyanese love our Trini counterparts but ever so often we suspend our diplomatic relations for 90 minutes.

Fenwick has little time to get ready as 2020 was lost entirely owing to covid19 and a FIFA suspension which almost cost T&T its World Cup qualifying spot.

Guyana was also inactive for most of 2020 but resumed full training earlier this month at the National Training Centre in Georgetown.

"We played no football in 2020 except for a novelty two-day tournament featuring national players and fringe players (December 29 and January 1)."

Forde said similarly to their T&T counterparts, the team had to get approval from its health officials to train.

"Clearance from the national covid19 task force is for the Golden Jaguars only.

"The approval is contingent on protocol and plans as part of our bounce-back effort. We have oversight from health authorities."

Asked whether any player has tested positive since training resumed he said, "We haven't had any issues since going into training camp last Sunday."

He said domestic football and all competitive sports in Guyana remain on pause.

The Guyana domestic football season usually kicks off mid-February but Forde does not anticipate it to get under way.

He said covid19 precautions are ramped up because of the threat of the new covid19 strain.

Does he expect this to hamper Guyana in the World Cup campaign?

"We started preparation essentially late. That is troubling, but life is more important than football," he said.

Guyana is expected to play two friendlies this month as its campaign begins to take shape.

Asked whether the oil boom in Guyana has made funding for the World Cup campaign easy to come by, Forde said, "Success at the national level doesn't always translate to success in sport. We have budgeted for our campaign but still trying to secure sponsorship to make our journey easier. 2021 will be a busy year."

Addressing the composition of the team," Forde claimed it would be "balanced" between local players and foreign-based.

Fenwick told Newsday that it was important to put together a squad of players who have been playing consistent, competitive football.

"I'm gonna have to put a side together that's experienced and been around the block. There is no Pro League, there is no Super League. There is gonna be just four to five days (training) before my first (competitive) game."

Forde said despite the disparity, Guyana plays more like a top 100 team.

"I believe the team is playing really well but we don't know how covid19 break will affect (performance)."

WATCH: Former National U-20 captain Shannon Gomez speaks to the press about his sessions with the Senior Team this year ahead of upcoming 2022 World Cup qualifiers