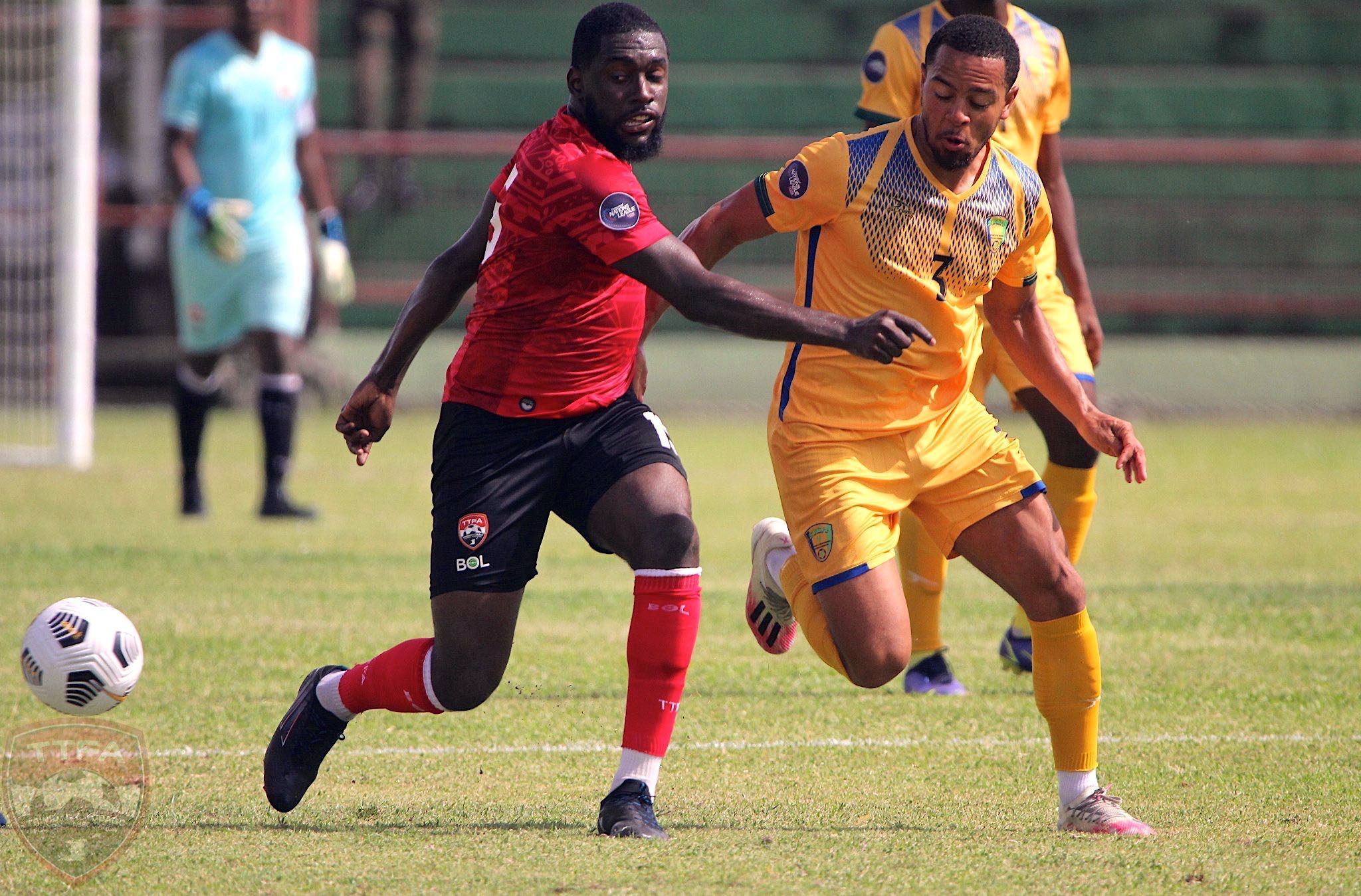 Neveal Hackshaw and Levi Garcia both scored first-half goals as the T&T Soca Warriors cooled St Vincent and the Grenadines “Vincy Heat” 2-0 in their Match Day Three clash off to move temporarily to the top of Group C of the 2022/2023 Concacaf Nations League matches in League B at Arnos Vale Stadium in Kingstown, St Vincent Friday.

With the win, their ninth in 14 matches against the “Vincy Heat”, the Angus-Eve-coached Soca Warriors improved to six points from three matches, two ahead of Nicaragua. That was until the Nicaraguans sealed a 2-0 win over Bahamas at Thomas Robinson Stadium in Nassau, two hours later, to retake the lead.

Meanwhile, the loss was also the first for St Vincent and the Grenadines in a CNL match on home soil and they remain at the bottom of the four-team pool ahead of their second match against T&T at the Hasely Crawford Stadium, Mucurapo, on Monday from 7 pm, while Nicaragua, who sits in the top spot in Group C with seven points, and Bahamas will also meet again.

Yesterday, the Soca Warriors were on the front foot from early on with Garcia taking on three defenders before firing a shot off his weaker right foot over the bar from just inside the 18-yard box after only four minutes.

Two minutes later, T&T went close again when the lively Reon Moore fed Garcia a pass from the left flank and the Greece-based T&T striker then squared to an onrushing Noah Powder, but he too fired over with goalkeeper Lemus Christopher at his mercy, when it seemed easier to hit the target.

St Vincent and the Grenadines though would come the closest to an opener in the 14th minute when Garret Leigertwood found some space on the left byline and chipped a pass across the T&T goal mouth and goalkeeper Marvin Phillip, but Moldova-based defender Keston Julien was alert to the play and cleared the ball away with the host captain Cornelius Stewart ready to pounce.

The opener eventually came for T&T in the 17th minute when Hackshaw of United Soccer Championship outfit Indy Eleven intercepted a pass in SVG midfield and played a forward pass to Garcia.

Garcia, in turn, played a cheeky through ball over the top to Hackshaw who had continued the run and the T&T midfielder then held off his marker before lobbing a left-footed effort past the onrushing Christopher and into the open goal for a deserved 1-0 advantage.

AEK Athens striker Garcia then doubled T&T's lead when he leapt between defenders Mekeal Williams and Jahvin Sutherland to connect with a long-range pass from John-Paul Rochford with a downward header back across Christopher and into the far corner off the inside of the post.

Two minutes before the half-time interval, T&T almost extended the margin to 3-0 via a long-range free-kick, but unluckily for the T&T player, it cannoned off the right upright with goalkeeper Christopher beaten at full stretch and out of play for a goal kick.

On the resumption, coach Eve would have hoped for the T&T players to add to their tally, but faced with a heavy downpour of rain and a robust tackling host who were the benefit of some lenient officiating by American referee Alex Chilowicz, the Soca Warriors failed to add to their tally with Garcia glancing a header over from a corner in the 57th and Moore firing against the cross-bar in the 59th while Stewart headed wide of the target for the host after a right-sided centre skidded off the head of T&T defender, Turkey-based Sheldon Bateau.

T&T then wasted another chance in the 67th minute when Moore failed to pick out substitute, India-based Marcus Joseph, who was unguarded at the centre of the goal while in the 82nd, Rochford was put through on the right side of the 18-yard box but with three T&T players awaiting his cut-back pass, St Vincent and the Grenadines Kevin Francis made a timely interception for his team.

The T&T players were then left frustrated by another bizarre call from referee Chilowicz when he failed to call a penalty kick after goalkeeper Christopher missed his attempted punch on a right-sided cross and connected with the head of Hackshaw.

And two minutes into time added-on, Joseph tried his luck from just outside the 18-yard box, but Christopher was equal to the task and made a comfortable low save.

In the end, it was a well-deserved win for T&T who will return home today (on Saturday) ahead of Monday night's penultimate match in the group against SVG at Mucurapo.

The "Vincy Heat", meanwhile is still searching for its first CNL victory of this tournament, having fallen to the Bahamas in the opener but earning a point in a 2-2 draw with Nicaragua last time out.

The loss was also the first for SVG in a CNL match on home soil.

WATCH Eve at Post-Match Presser after T&T's 2-0 win over St Vincent at Arnos Vale. Both teams meet again on Monday 7pm at the Hasely Crawford Stadium