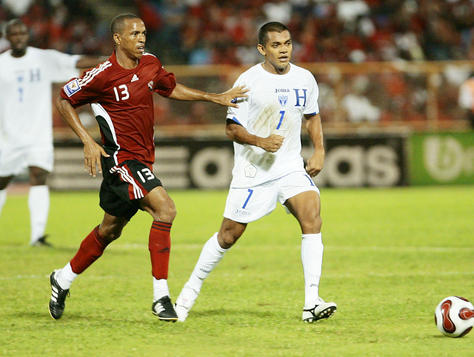 Honduras inspirational captain Amado Guevara has bruised his right ankle in training and remains questionable whether he will take the field for Honduras in their match against the Soca Warriors on Saturday.

Amado took a big hit on his right ankle on Tuesday and yesterday he was forced to leave the team's night training session at the Olympic stadium. Carlos Costly, Wilson Palacios and Osman Chavez are also all out through suspension for the match against Trinidad and Tobago.

Guevara meantime told the El Heraldo Press when ask about the "ghost of 2001" a game in which T&T won 1-0 that sent Honduras crashing out of the 2002 World Cup finals to forget the past and that Honduras needs to focus on the present and get the job done on Saturday. The captain said "The past is past, so there is nothing more to say."

Ivan Guerrero recalls: "We hit the goal post just seven times, not knowing what happened. We had control of the ball and the ball did not score. "It was bad luck." That scene was terrible".

Meanwhile Honduras coach Reinaldo Rueda had the opportunity to extensively assess his group of players currently in training and already started working on tactics for Saturday's encounter.

"Fortunately, we had good responsiveness from the of group of players here, a trend which is in good level. We had good practices in the past two days to try and get into good shape for the game, "said the Colombian coach.

Against Trinidad and Tobago, Rueda visualize a difficult game because of the characteristics of the rival he said".

"The game should be a good game as Honduras has always been an aggressive team, uncluttered and smart approach to discipline their rival team who have not yet decided on a starting team, although the combinations are becoming feasible.

"Public support is crucial, the group has been loyal to the people of San Pedro Sula, and the decision to bring the game here is a way to thank them for their support. The support of the fans will again be crucial to get a positive result from the the Caribbean side.

"Our selection will be naturally aggressive, we play a very vertical football, whether or not David Sauzo play we will remain in the same style, strong characteristics and we must identify the valuable points that drives to win this game.

Adding: "With Latapy (Trinidad coach) in charge have made the visitors interesting, though Francisco (Maturana) had another style, but that can not make the same trend, T&T have players who put the ball on the floor and they can play along well, everything will go through what they wish to propose if they stay focus."

Given the possible absence of captain Amado Guevara, Rueda wasted no time in trying different groups of players yesterday in reserve matches against Marathon (4-0 with two goals from Carlos Pavon, one of David Suazo and another Julio "Rambo" de Leon) and Real España (3-0 with goals from Jerry Palacios Ramon Nunez, David Suazo), both games Rueda tested a team that is likely to face Trinidad and Tobago.

"It's complex because so far we have not had the opportunity to play a lot of minutes and have to see how David Sauzo responds to a full game.

Noel Valladares is in the goal, on the right side will be Mauricio Sabillón, Emilio Izaguirre on the left and in central defence will be Erick Norales and Maynor Figueroa as a substitute for the suspended Osman Chavez.

In midfield, Julio de Leon on the left, Melvin Valladares and Amado Guevara who, should recover in time, Hendry Thomas as the defensive midfielder and Edgard Alvarez on the right. Carlos Pavon and David Suazo on the top as they both scored goals and showed fine definition in the practice matches, ended coach Reinaldo Rueda."

Honduras charging up for clash with “Soca Warriors”
By: Shaun Fuentes (TTFF).

Trinidad and Tobago’s National senior footballers will have a final dress rehearsal at around 6pm (8pm T&T Time) on Friday at the Olympic Metropolitan Stadium in San Pedro Sula, venue for Saturday’s 2010 World Cup qualifier against Honduras.

The Russell Latapy-coached team had a closed door session at the Francisco Morazan Stadium on Wednesday and took up the option to train at the match venue from 3pm on Thursday (today).

On Wednesday, after a prior agreement to use the Morazan Stadium made two weeks ago and again promised a day before, the T&T management staff had to meet a payment request of USD $1,000 from the stadium owners to use the venue for two hours. There was a delay in the start of the session and Yorke and a couple other members of the staff who had arrived at the venue prior to the team, were asked to refrain from setting up for the session until the payment was made. T&T eventually got on with its session and on Thursday, the Honduran authorities apologized and returned the cash to the T&T management team.

The Hondurans have been making a big deal about the encounter all week with the affair grabbing the headlines everyday in the newspapers and local media houses trying to stay as close around the T&T team as possible.

There was an unconfirmed report that their captain Amado Guevara suffered a right ankle injury in training on Tuesday and remains doubtful for the match. Three other players Carlos Costly, Wilson Palacios and Osman Chavez are ruled out from Saturday’s clash on yellow cards suspension.

And there has been much said about the 1-0 win by T&T back in October 2001 courtesy of a Stern John goal which crushed Honduras’ chances of advancing to World Cup 2002. That win came on the heels of Mickey Trotman’s death in a car accident in Trinidad.

"The past is past, so there is nothing more to say,” said Guevara.

Ivan Guerrero added: "We hit the goal post just seven times, not knowing what happened. We had control of the ball and the ball did not score. "It was bad luck." That scene was terrible".

Honduras boss Reinaldo Rueda said he was working strongly on his tactics for T&T.

“We have had good sessions over the past two days and we are getting ready. We need to be in good shape for the game,” said Rueda. “We will play an attacking style to win. Whether David Suazo plays or not, we will not change our style. We want to win."

Wigan Athletic striker Jason Scotland said he was keenly awaiting the chance to try and push T&T to eight points. Two of his Wigan’s teammates, defender Hendry Thomas and Maynor Figueroa are in the Honduras line up and the bets are on.

“It’s going to be big challenge for both teams because they also want to win at home,” Scotland told TTFF Media.

“The boys at Wigan have been talking about the game and there was some banter as well. I had a knock on my ankle a little while ago and they making jokes and were touching it, saying they think it will be alright for the match.

“Generally speaking, I think we have a good chance because we have players who can get the job done but it’s just a matter of us getting it together and doing what we need to on the pitch. The boys are all feeling good at the moment and the sessions have been spot on so hopefully we can carry this into the game on Saturday and set up a good result before we face the US on Wednesday,” Scotland added.