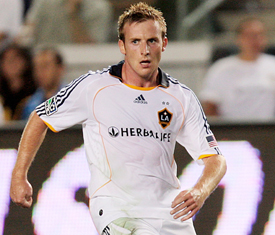 Chris Birchall is quite likely to join Trinidad and Tobago's squad for the 2010 Digicel Caribbean Cup Finals, but the Soca Warriors' preparation has been adversely affected by the local schedule and they will now have just a couple of training sessions before travelling next Tuesday to the tournament, which takes place in Martinique November 26-December 5.

The decision of the Trinidad and Tobago Football Federation (TTFF) to start the FA Trophy competition today has resulted in players returning to their T&T Pro League clubs rather than training with the national team.

With today being a FIFA International date, Trinidad and Tobago head coach Russell Latapy had first hoped to test his Soca Warriors in an international friendly, but when that fell through he hoped for a scrimage against a local team.

But by staging the FA Trophy on a FIFA playing date, the TTFF have inadvertainly allowed clubs to reclaim their players for the tournament.

"We now have just two more sessions," national team manager David Muhammad reported yesterday. "We will train on Sunday and Monday mornings, before leaving on Tuesday for Martinique for the Digicel Caribbean Cup."

And Pro League top-scorer Devon Jorsling will see action for Defence Force against South's Diamond United in the opening match of the double-header at Ato Boldon Stadium.

Latapy's preparation for the Caribbean Cup is also further hampered by this week's restart of the Pro League, which will see the same players involved in second round matches on Friday and Saturday.

Commenting on Birchall's availability for the Caribbean Cup, Muhammad said he had been in contact with the LA Galaxy midfielder and expects him to become the 24th player in the T&T training squad.

Latapy was expected to pick his final squad tomorrow, but may delay his decision due to the recent developments.

"As of now, we have 23 players, but it is very likely that Chris will be involved," said Muhammad.

"I've been in communication with him and monitoring the situation with his club. They (LA Galaxy) are now out of the MLS Cup and he should be joining us."