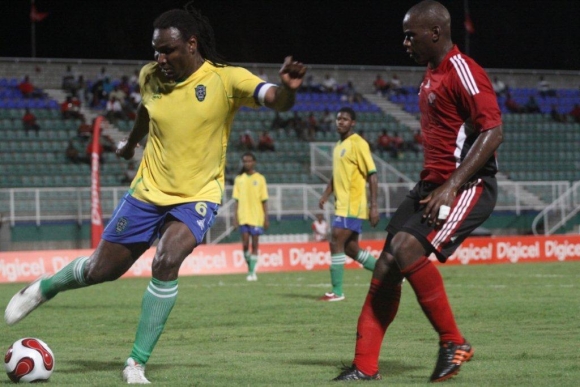 On the verge of an overseas career with American club Orlando City, national striker Devon Jorsling has revealed Stoke City striker Kenwyne Jones is on his list of admired footballers and he’s hoping to achieve similar success to the former Sunderland man.

Jorsling said last week he felt Jones was deserving of the T&T Federation’s Player of the Year award for his exploits in the English Premier League.

Jorsling was overlooked despite his impressive showing which included five goals at the Digicel Caribbean Cup group phase and his good run of form for Defence Force.

“I have no ill feeling about Kenwyne winning the award because even though I felt I had a good year, I believe he (Jones) is a playing at a lever much higher than I am and the Premiership is way above the Pro League and for him to score some nine goals, it has to be a great achievement.

“I didn’t feel badly about not taking the award despite what people may have thought,” Jorsling said.

“Kenwyne is like a role model for players like myself. I played with him on the Under-20 and to be watching him in the Premiership now on television is a big deal. He motivates a lot of us.

“I don’t think players like himself, Stern John and Carlos and others really realise how important they are to us back home in terms of motivating us to become better players,” the ex-Malick Senior Comprehensive player said.

Jorsling will join Orlando City on February 15 for preseason training ahead of the start of the USL season. “It’s a great opportunity because I’m seeing it as a start to bigger things. If I do well then maybe I can get into the MLS and push on from there,” Jorsling added.