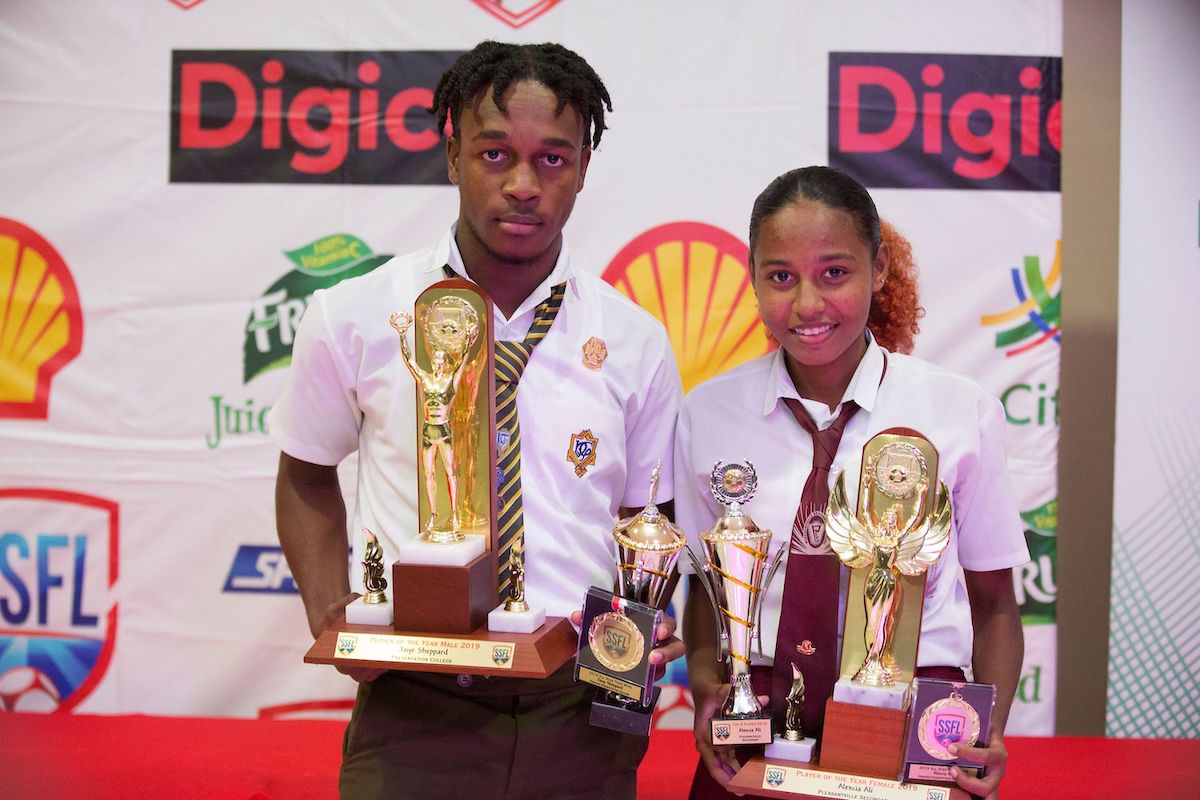 Jaiye Sheppard (Presentation College, San Fernando) and Alexcia Ali (Pleasantville Secondary) were crowned male and female Secondary Schools’ Football League (SSFL) Players of the Year respectively at the 2019 Awards and Presentation Ceremony, which kicked off at the Couva/Point Lisas Chamber of Commerce on Thursday.

Speaking with Newsday following the presentation, Sheppard was elated with his capture of the tournament’s most prestigious individual prize and remains optimistic for the 2020 season. According to Presentation coach, Sean Cooper, Sheppard will be placed with responsibility of captaining the title-winning squad when the competition resumes in September.

“It’s an amazing feeling to win this award and I would not have been here without the works of Presentation’s coaching staff and my teammates,” he said. “We had a great season, bolstered by a younger group of players. Altogether, we decided to work hard and God gave us what we deserved. I am proud, not only of myself, but what our team was able to achieve as a unit.”

Meanwhile, after two years of total dominance in the Coca Cola Girls Intercol, Pleasantville’s Ali concludes her SSFL career at the end of the academic year. However, having captured back-to-back Girls Intercol and Player of the Year awards, she leaves contented.

“It’s a great achievement for me on a personal level and I’m very happy for what I have achieved throughout my stay at Pleasantville. I thank my mother, coaches, teachers and teammates for always pushing me to do my best. Going forward, I would like to get a sport scholarship and play football abroad.”

In his address to the multitude of student-athletes, coaches and teachers at the ceremony, president of the T&T Football Association (TTFA) William Wallace, credited the dedicated efforts of those who contested last season’s grueling competition.

The newly-appointed TTFA head also held one minute’s silence in memory of former local football presidents, Oliver Camps and Raymond Tim-Kee, ex-national players Jason Marcano and Shahdon Winchester, all of who passed away last year. Strangely enough, mere hours before the start of the awards, the national football fraternity was again plunged into mourning as former National Under-17 captain, Roderick Anthony, died in a car crash in Tobago.

“Hard work beats talent, when talent doesn’t work hard,” said the former SSFL leader. “Give one hundred percent all the time. You will not only improve your game but also motivate those around you.”

The feature address was delivered by former National senior men and youth team coach, Hannibal Najjar, who urged the youngsters to maintain focus on their personal, sporting and academic goals.