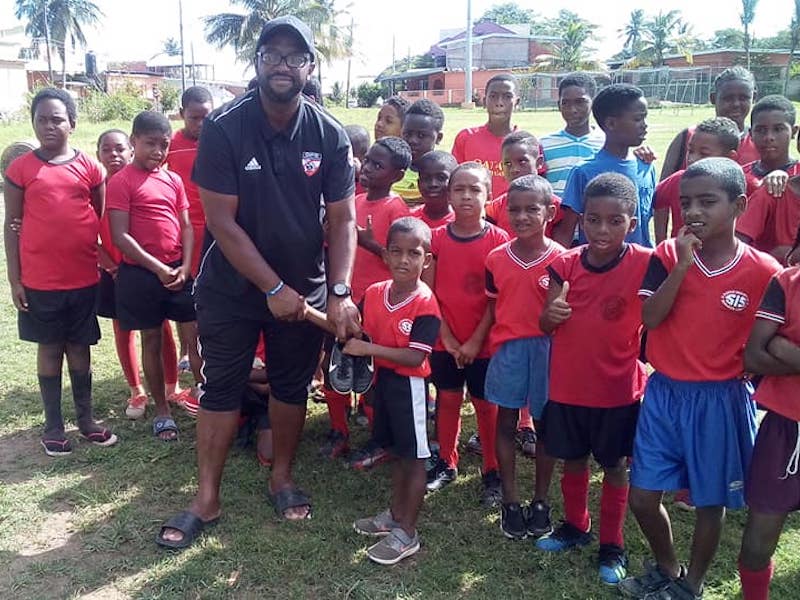 For years, Anthony Roy has worked quietly to promote the state of local football, starting with its youngest players.

Roy, a former athlete himself, has played with various teams in T&T before migrating to the United States to further his coaching career.

But while he lives and works outside of T&T, the 49-year-old coach has kept his finger on the pulse of local athletics and continues to visit his home country to help nurture the next generation of athletes.

Speaking with Sunday Newsday during a telephone interview on Wednesday, Roy said he was born in Kelly Village, Caroni, but lived in Laventille for part of his youth. He said sport was the avenue many young people used to better themselves.

“I feel as if I owe a debt of gratitude to Trinidad; after all it has done so much for me, allowing me to go to the US to work and receive the training to become a coach.

“I really want to give back to my country as best as I can and I want to start with the younger players because I remember how difficult it is to be a young man and not knowing how to market myself.”

He has been visiting T&T for the past eight years, donating football uniforms and boots to teams and athletic clubs across the island. His interest was piqued when he read a 2019 article in the Newsday on the work of veteran coach Michael Paul and his athletes in Laventille and the Beetham.

“I really admired what he was doing and what he achieved in the community. I knew him when I played football at Queen’s Park Savannah years ago, but I didn’t know he was so involved with the boys in the area. I felt inspired to help him as best as I could.”

He said while he was happy to make the donations, he was more interested in giving some of Paul’s athletes the chance to excel in the sport outside of T&T, by offering them scholarships and contracts with US-based football clubs.

“We have a lot of talent here in Trinidad and I’m very excited to have some of these youths enrolled in colleges in the US where they can not only develop their skills as athletes but also get an education.”

Referring to one of Paul’s star athletes, Fabian Ayres, Roy said plans were already being made with some of his partners in the US to offer the teen a spot at a university. Despite T&T’s abundance of talented junior players, Roy said he feels that many young athletes often lacked direction on how to apply to universities abroad and urged parents, teachers and coaches of teens to be as accommodating as possible.

Recalling his own experience helping local athletes secure spots in US-based teams, Roy said many young people are often unprepared and feel overwhelmed by the transition moving from Trinidad to an international arena.

“You have young men and women who have never been outside Trinidad before and now here they are on a larger arena they aren’t accustomed to. Some of the players may not be accustomed to interacting with their teammates from different cultural backgrounds.

“Some of these players may be accepted by a university in a state that snows and they aren’t prepared for that, so it’s important the coaches and the parents to be part of the process and help their children get into a good school and let them know the challenges that lie ahead.”

Over the past eight years, Roy said he and his partners, both local and in the US, have helped over 100 students get accepted into universities and he stressed the importance of coaches in the application process.

“A lot of times coaches might see their players as just a means to an end. They need to stop and be the mentor, teacher, father-figure in that player’s life. It’s important they are able to nurture that player to greatness.”