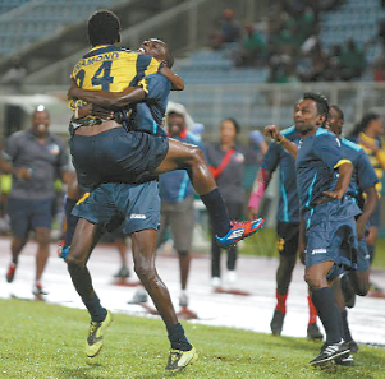 Joevin Jones led with a goal and was involved in two others, all in the second half on Friday, to inspire DIRECTV W Connection to a comfortable 3-0 win over Guaya United in semi-final two of the 2013 Toyota Classic at the Ato Boldon Stadium.

Sando created history, in front of some 3,000 plus spectators in semi-final one at the Couva venue on Friday night, by becoming the first Super League club to ever reach the Final of the Classic – which brings together both leagues – in the tournament’s 9-year history.

It was in the fifth and final minute of stoppage time that Devon Modeste, virtually absent all night, headed in a controversial Sando winner for a 3-2 score.

Wild celebrations boiled over from the stands and onto the pitch, and it seemed as though the Sando supporters, technical staff and players had just won a title.

While the hearts of Defence Force surely sank into their stomachs at the sound of referee Cecil Hinds’ final whistle.

Modeste had earlier whipped in a cross from the left, directed at Teba Mc Knight, who failed to collect and in the process took defender Devin Jordan down with him, but Hinds allowed play on.

Foul, or no foul, there is an old saying that goes something like: Don’t stop playing unless you hear the whistle.

Jordon, who stayed down momentarily, suggesting that he was fouled, clearly ignored that old saying and his team paid the price when Sando attacker Ryan Fredericks whipped back in the loose ball over a fully committed goalkeeper Kevin Graham for Modeste to head into an open net.

It was also Jordan that Kerron Smith easily turned inside the area and drove a low shot past Graham for a 14th minute 1-0 Sando advantage after collecting a low Kemuel Rivers’ cross.

And in the 72nd minute Anthony Parris converted from the penalty spot for a 2-0 Sando cushion after he was taken down inside the area by Jordan. Referee Hinds didn’t hesitate on giving the decision in that instance.

Overall the players of head coach Ross Russell should cast blame on themselves for not putting away a match they dominated with the ball and created a superior amount of chances.

The soldiers had a chance to level the scores in the 33rd minute following a neat buildup, but Jerwyn Balthazar, who eventually pulled a goal back in the 77th minute, volleyed overbar.

Sando goalie Andre Marchan then produced a good save to keep out a Carter header off Curtis Gonzales’ free-kick in the 39th minute, and in the 45th minute another eventual goalscorer, Devorn Jorsling, the usually potent striker headed wide of an open net from a Jemel Sebro cross.

That’s not all. Seventeen minutes inside the second half Richard Roy slipped a pass to Jorsling, and instead of going for goal early, the striker attempted the find teammate Carter across the area, but his pass was intercepted by Marchan.

In the 75th minute Marchan had a comfortable take, dispossessing substitute Josimar Belgrave, who should have done a lot better from inside the six yard area.

But it was Belgrave that provided Carter the diagonal pass, to whip in a cross for a diving Balthazar to head in goal, and reduce the deficit 1-2 in the 77th minute.

The soldiers then leveled the scores 2-2 in the 84th minute when substitute Kerry Joseph’s cross was flicked on by Carter, and Jorsling at the back post made no mistaking in heading in from close up.

Belgrave supplied another pass to Carter in the 93rd minute, however the speedy Defence Force winger was denied by Marchan after slipping past defender Devon Drayton.

Then in the 95th minute that dreaded Modeste goal came and secured Sando’s place in the Final.

Connection, however, avoided such embarrassment in the second contest against Guaya United despite playing to a goalless, but entertaining first half.

Then in the 5th minute Hashim Arcia, who scored a superb volley in the second half, hit directly at Saunders in another scoring opportunity.

A minute later Jody Allsop was picked out by Ryan Stewart, only to see his excellent effort pushed overbar by Archibald.

Connection then took the game to a five-man Guaya backline.

With little time to breath, Guaya was forced back on numerous occasions, but Connection just couldn’t hit the back of the net in the first half.

Connection right-back Kurt Frederick even tested Saunders in the 9th minute, and when he whipped in a low cross behind the defense in the 17th minute, Arcia muffed wide with the Saunders at his mercy.

Two minutes later Saunders was forced into action and made a low save to keep out Yefer Steven Lozano strike from above the area.

The Colombian later shaved the crossbar in the 24th minute, and seconds earlier, Arcia was late to a Frederick cross as Guaya, without its head coach Ron La Forest present in the technical area, failing to show the same grit that led them past North East Stars (in the preliminary round) and Point Fortin Civic (in the quarter-final round) with 2-0 scores.

La Forest, believing he was suspended for the semi-final because of his quarter-final ejection from the area against Point Fortin, instructed his bench from the stands.

Guaya won a free-kick at the edge of the area in the 42nd minute, for a handball outside the area by goalkeeper Archibald, but captain and sensational midfielder Ryan Stewart wacked his effort into the wall.

It took Connection until five minutes inside the second period, and a piece of individual brilliance from Jones, waltzing his way into the area and firing into the roof of Saunders’ net for a 1-0 advantage.

Then from a perfect Jones pass – outside the left boot — in the 64th minute, Arcia launched a first time volley into the net for a 2-0 Connection advantage.

The match was clearly slipping away from Guaya and assistant coach Calvin Hughes, who replaced an overworked R. Stewart with Zavion Navarro a minute earlier.

Jones and company didn’t take their feet off the gas.

When Jones sent a long pass forward to winger Neil Benjamin Jr. in the 74th minute, it was all over for the Super League outfit.

Benjamin held his composure after a quick run, down the flank and into the area, to round goalkeeper Saunders and roll a shot into the net for a 3-0 score.

Saunders avoided a fourth in the 83rd minute by blocking out a Jomal Williams strike following a neat buildup by Connection, and denied the substitute again in the 87th minute.

Williams then led a patient buildup in the 88th minute and in a play that should have at least forced a save out of Saunders, Benjamin wacked his effort overbar.

Saunders and the Guaya defense were fortunate again in the final minute of regular time when Connection substitutes Alvin Jones and Yhon Stiven Lopez combined and the latter hitting just high of the upper corner.

Guaya, in the end, failed to meet its wish against Sando – which defeated them in the Super League Knockout Final a month ago.

As for the Toyota Classic Final, can Sando, which defeated Police FC 5-0 (in the preliminary round) and outlasted Caledonia AIA 11-10 on penalties following a 2-2 score (in the quarter-final round) take another Pro League scalp, or can W Connection lesson another Super League outfit?

KERRON SMITH has been playing with a fractured right hand—cast and all—for six weeks. But it did not prevent the footballer from scoring against Defence Force...perhaps, too easily.

In the other semi-final, two-time champions DirecTV W Connection put on a football clinic when beating Super League team, Guaya United 3-0. The crowd on Saturday was big and noisy—Guaya came with two PTSC busloads of villagers.

The opening semi was a topsy-turvy affair. Club Sando led 2-0, before Defence Force scored two late goals to level the match. A Devon Modeste header in the dying seconds then won the match for Club Sando in dramatic fashion.

“I feel great,” said Club Sando coach Anthony Streete. “As a past Army player, I let my players know it was a hard task, and we accomplished it.”

Early on, Army striker Devorn Jorslyn put wide two easy chances. Smith then got round defender Devin Jordan in the 14th minute, and netted a low shot. Smith, a 25 year-old former W Connection player from Chase Village, Chaguanas, has played with a fractured hand through the entire competition.

In the 72nd minute, Club Sando went 2-0 ahead, from the penalty spot. Midfielder Anthony Parris converted after Ross Russell Jr had earlier pulled him down.

Defence Force got two late goals—Jerwyn Balthazar’s back-post header in the 77th and Jorslyn’s chested finish in the 84th. But Modeste got the late decider for Club Sando.

“Responsibility always falls on us,” W Connection president David John Williams said, after Defence Force lost. “We have to restore parity for the Pro League.”

W Connection took charge of the first half, but Guaya held on for a 0-0 score at the interval.

In the 50th minute, however, Jones finished a meandering solo run with a roofer from inside the penalty area. Arcia made it 2-0 in the 62nd, and what a great goal it was. Jones’ outside of the foot pass found his striker partner, Arcia, who finished with a bullet. And soon after, Glen Benjamin Jr outpaced the Guaya defenders, slipped by the keeper, and scored into an open net for the third goal.