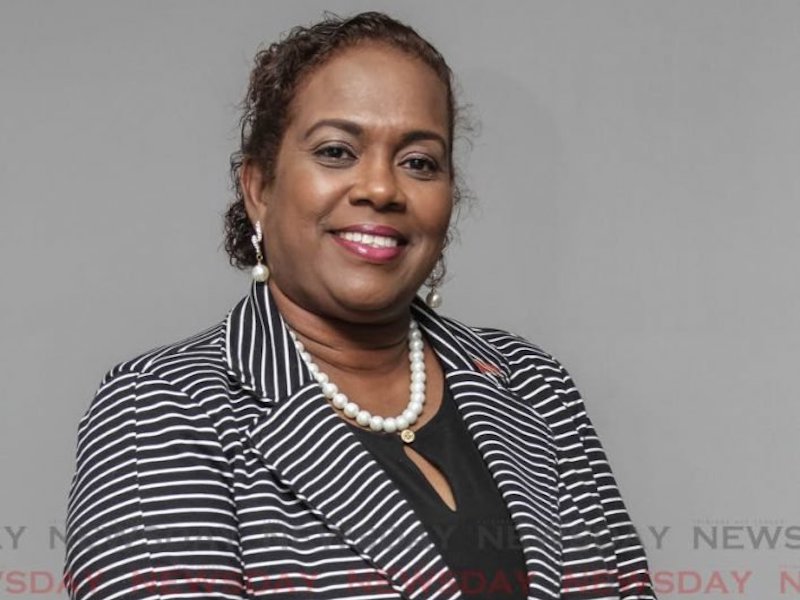 The mother of three, who lives in Trincity, is married to Joel Warrick, head coach of local club Trincity Nationals FC. She is also part owner of the club and a T&T Football Association (TTFA) board member.

Joseph-Warrick believes the future is female and wants to represent the interests of young women in T&T.

Before her involvement in football, Joseph-Warrick worked in the hotel and fast food industries for 25 years. She later got into the local cinema business, and was general manager at Caribbean Cinemas 8 and the operations manager at Digicel IMAX. She has been retired for the past three years.

"My boss (at IMAX) was amazing. What I enjoyed most was that everyone, except the chairman, were women, and women of power. The financial controller, the CEO, me, and the marketing manager were all women. And believe you me, we were fantastic. We were great together."

She told WMN her love for football grew a result of her husband being a coach and a player. He was also a teacher at the Arima Boys' Government School. Their now 25-year-old club consists of an academy and seven teams.

"My love for it started a very long time ago. Fortunately, for me, when we decided to start our club, we decided to formulate this club in Trinicty. My son was part of first set of kids we would have had in the environment. And of course the daughters came along."

She is the mother of national players Shanelle and Jonelle Warrick-Cato.

"The passion came along. They were always in the savannah – what else could they fall in love with but football?"

She recalled enjoying football as a child as she grew up in a household that loved sports. But she said in those days, it was uncommon for women to be involved in the sport.

"Women were not so much featured then. It was a man's sport then. The boys played football so that's when you got the chance to go out and see. So obviously, the only ones you could have known were the Maradonnas and the Peles. Those were the teams and names you were familiar with because they were always in the news, they were always on the TV."

Although she doesn't play, she said, "I played one or two, what we would call fete matches because we had to take part in it but it was a nice experience."

And now, being part of yet another sporting family, she said there is a specific TV dedicated to sports only.

"My entire living room is full of trophies. I actually told my husband quite recently I think we have to build a room. Because it's not just trophies of the various teams that we have, we also have trophies of my kids' accomplishments – most goals, MVP (most valuable player), you name it. Year after year."

She said their club has been successful and has accomplished a lot this year. The under-13 and under-15 teams even went to Orlando, Florida in April to participate in the Florida Classic.

"It was a lot of hard work, getting everything in place, all the visas, raising the funds. Our club is not sponsored, so basically it's funds of both my husband and I, that of fund-raisers that we would have, as well as reaching out to a few corporate people who would give whatever they can to assist with something of that magnitude."

Initially, there were only male teams but in 2009, the first female team was created, and her daughters began to play for the club as well.

On November 19, 1989, T&T's senior men's national team (Strike Squad) was one point away from qualifying for the 1990 World Cup in Italy, but fell 1-0 to the US. It was a heartbreaking moment for football fans throughout the country – including Joseph-Warrick, for more than one reason.

"In 1989, I was pregnant with my eldest daughter and I literally wanted to cry because I could not go to the stadium. My husband was like no 'There's no way we could go.'"

"I think that would have been one of the major events as a young person that you wanted to be part of, and just the mere fact that I could not go. I mean, I watched it on TV but it was an historic event, so you'd feel like you need to be part of it."

She said she was disappointed at the result but was also happy the team had even reached that far.

Then came along the moment she had been waiting years for – T&T finally qualified for its first World Cup. In 2005, then national defender Dennis Lawrence scored the winning goal against Bahrain, booking the team's spot in the 2006 FIFA World Cup in Germany. The team was eliminated at the groups stage of the finals but still warmed the hearts of patriots and local football fans.

"It was exhilarating. It was phenomenal. It (the excitement) still goes on today. We are so passionate. I can't recall not going to any games. We were always there as a family. And once it's not in the country, we make sure we watch it on TV."

Fast-forward to 2014, to a moment that would have hit a little closer to home for her. The senior women's national team needed just one point to qualify for the 2015 FIFA Women's World Cup, but a late goal from Ecuador shattered their hopes. Joseph-Warrick said she was devastated.

"It was too emotional. I saw the hard work put in by those young ladies. We should have (qualified). We should have. Imagine we had a women's team where the stadium was full. It was full. I mean, to me that was like wow. The women were just hitting out of the ball park right through.

"I'm thinking about it and I want to cry because I felt like that would have been it."

She said she and her daughters had a good relationship with most of the players, and that they would often visit their home. Because of this, she said, the loss was also personal.

Joseph-Warrick became TTWoLF president in April, after being vice-president for two years. She was uncontested at the elections.

"Doing this here for women now, it's just an addition to what I've accomplished so far. It's being a woman in a man's world, because before I went in the business it was basically a man's world. I guess I get the excitement when I have to prove myself."

She said being the league president has opened her eyes to many underlying issues in local women's football.

"I felt like I could have made a bigger difference. As the vice-president, I wouldn't say I was limited but a lot of information I was not privy to became available to me. It's one thing to watch it from that side of the fence. When you're on the outside, you looking at things like, 'Oooh,' and when you come on the inside, you get to see exactly what these girls have to deal with."

She said the women's programme currently lacks funding and structure, adding that the available managers and coaches are not enough. Sometimes, she said, more than one team had the same technical staff.

She will be vying for second vice president in the TTFA elections on November 24, and said if successful, her team will be able to move women's football forward.

"My first love, and I still have a big picture of my daughter when she met him, was David Beckham. That was my boy, he was awesome. I like good football."

Asked what advice she would give to young and upcoming female footballers, she said, "I would tell them to look up, smile, and know that we are here for them. I am here for them.

"As the proud mother of two national players who has seen the good, the bad; lived the highs and the lows, and seeing first-hand what they experienced, I don't want any young lady who wants to get involved in this sport have to go through what my daughters went through. As well as current young ladies, from the past players to the present players that they going through it right now."

She said she has a lot of great plans and visions for the years to come, and that she can only see things getting better.